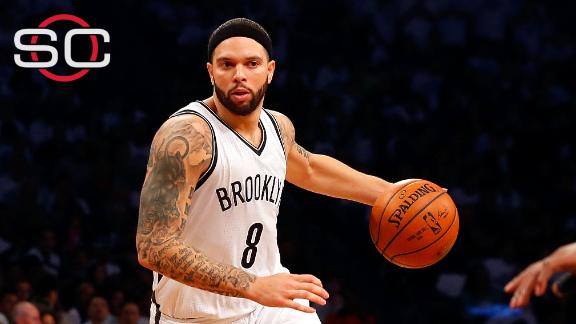 "I think we both made it work -- tried to make it work -- I think we had some great moments with him," King said, speaking prior to the Nets' summer league game in Las Vegas.

Brooklyn will buy out the remaining $43 million on Williams' contract for $27.5 million, with payments to him spread over the next five seasons, sources previously told ESPN. Once Williams clears waivers, he'll sign a two-year contract with the Dallas Mavericks worth approximately $10 million, sources said. The money Williams earns from Dallas would be on top of what Brooklyn owes him as part of the split.

Both King and Nets coach Lionel Hollins dismissed reports that the parting was related to a rocky relationship or confrontation between point guard and coach.

By buying out Williams and stretching the $27.5 million over five years, the Nets will fall below the luxury tax line and avoid paying the progressive "repeater tax," a decisive factor in their decision.

"We wouldn't have done this if we didn't get under the tax," King said. "It wasn't a mandate. It was just something that I felt -- the goal. If we're not going to be championship-level, there's no need to be a taxpayer."

The move also will give Brooklyn ample salary-cap room following the 2015-16 season as they try to reboot following several seasons of exorbitant spending, yet advancing no further than the second round of the postseason.

"I think we were being realistic and said, 'OK. We're not where we wanted to be, so now we reshuffle the deck, we have a great chance to create a lot of cap space for next year," King said. "We're able to retain some young players. We kept some of the core together and added some new athleticism, so I think we're headed in that direction."

Brooklyn's attempts to trade Williams went nowhere, with a limited trade market seemingly getting thinner. The Sacramento Kings pondered trading for Williams last season, but it's believed they were no longer interested after agreeing to a one-year, $9.5 million deal in free agency with Rajon Rondo.

The Mavericks, sources told ESPN's Marc Stein, did not pursue a trade for Williams because of the salary-cap space such a move would eat up.

Williams' departure leaves the Nets thin at point guard, a hole King said will be filled "by committee." The Nets currently have veterans Jarrett Jack and Steve Blake, as well as Shane Larkin.

Though he was doggedly pursued as a prize free agent in the 2012 offseason when the Nets re-signed him to a five year, $98.7 million contract, Williams was beset by injuries and inconsistent play during his tenure with the team. He averaged 16.6 points, 7.5 assists and 3.2 rebounds per game with a true shooting percentage of 54.0 for the Nets.

"We're going to lose a lot in Deron as a player, but it's going to be a good move for him, going back home with his family, and it's a different -- maybe it is a fresh start," Hollins said. "But it's a different look from being in New York for all this time, with the expectations and the team not reaching some of the potential everybody expected it to be. So it works out for both. We probably get a little bit shorter end of the stick just because of his talent, but he hadn't reached the level people expected him to in New York, and with everything that had gone on, I don't know if he would have, but it's probably for the best for both parties."