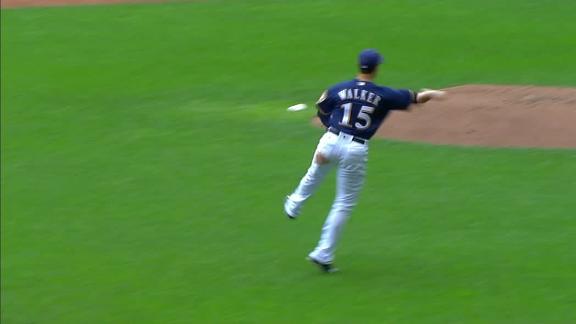 PHILADELPHIA -- The Milwaukee Brewers added a second-base upgrade for the stretch drive on Saturday, acquiring Neil Walker and cash from the New York Mets for a player to be named later.

The Brewers are 60-59 -- third in the National League Central and two games behind division leaderChicago. Milwaukee's second-base contingent, which consists primarily of Jonathan Villar and Eric Sogard, ranks last in the league with a .672 OPS.

The Brewers had expressed interest in Ian Kinsler of the Detroit Tigers, before shifting their attention to Walker since the July 31 non-waiver trade deadline. Walker became eligible to be traded to any team after recently clearing waivers.

He has a career .272/.339/.437 slash line over nine seasons with thePiratesand the Mets. New York acquired Walker from Pittsburgh in a trade for pitcher Jon Niese in December 2015.

"He's a first-rate guy,'' Mets general manager Sandy Alderson said of Walker. "He was very important in the clubhouse, and we're very glad we had him for the time that we did. I think he distinguished himself in his time as a Met.''

Walker was taking batting practice with his New York teammates two hours before Saturday's game Mets-Philliesgame at Citizens Bank Park when Alderson came out and conferred with manager Terry Collins behind the batting cage. A few minutes later, Walker and Alderson left the field for the clubhouse.

Walker was replaced by Jose Reyes at second base 10 minutes before the start of the game. Walker declined comment before leaving the park on a golf cart in the sixth inning.

The Mets are a disappointing 52-62 and third in the NL East, and they've recently begun selling off veteran pieces. They traded closer Addison Reed to the Boston Red Sox and sent first baseman Lucas Duda to the Tampa Bay Rays before the July 31 non-waiver trade deadline, and they shipped outfielder Jay Bruce to the Cleveland Indians for minor league pitcher Ryder Ryan on Wednesday.

Walker is signed to a one-year, $17.2 million contract and will be a free agent in November. The Mets are giving an undisclosed amount of cash to Milwaukee to help defray the $4.7 million that Walker is owed for the rest of this season.

Alderson said that Wilmer Flores and Reyes are likely to see the bulk of the playing time at second base after Walker's departure. And he indicated thatGavin Cecchini and Matt Reynolds also could work their way into the teams' second-base mix.

Alderson declined to speculate on whether the Mets expect any additional moves this month. Outfielder Curtis Granderson and infielder Asdrubal Cabrerahave been mentioned as potential trade candidates.

"We still have inventory,'' Alderson said.

The New York Yankees were reportedly close to acquiring Walker in a trade before the deadline, only to back out because of concerns over Walker's medical reports.

Walker underwent season-ending back surgery in September, and he missed 36 games this year with a partially torn hamstring, but he told reporters this week that his health is not a concern.

Walker impresses in Brewers debut
In his first game since being traded from the Mets, Neil Walker drives in a run with a double and shows off with a one-handed throw to first.
Report a correction or typo
Related topics:
sportsespnmlbnew york metsneil walkermilwaukee brewers
Copyright © 2021 ESPN Internet Ventures. All rights reserved.
More Videos
From CNN Newsource affiliates
TOP STORIES