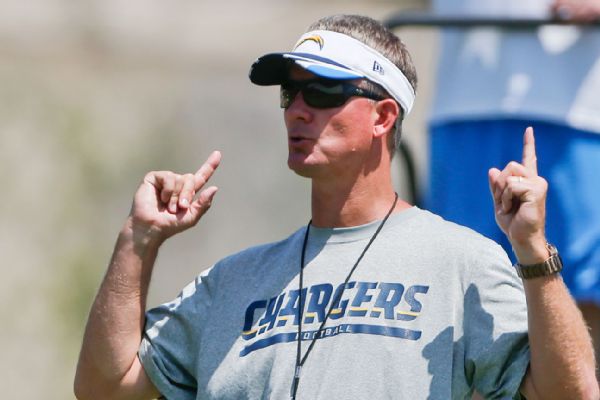 ENGLEWOOD, Colo. -- Newly hired Denver Broncos coach Vance Joseph has said he wants an offense with "swagger,'' and then Joseph showed a little swagger of his own to reel in the guys to help him with that task.

That means the Broncos have two coaches who called plays for NFL teams this past season to guide the team's offense and work with quarterbacks Trevor Siemian and Paxton Lynch. Siemian, who started 14 games this past season, just turned 25, and Lynch, who was the Broncos' first-round pick in April, just completed his rookie season.

Both coaches have plenty of Broncos ties. McCoy was Denver's offensive coordinator for four seasons, including quarterback Tim Tebow's run as the Broncos' starter in 2011 and Peyton Manning's first season with the team in 2012.

Musgrave was not retained by the Oakland Raiders despite the team's 12-4 finish and QBDerek Carr's breakout season. The coach is a native of Grand Junction, Colorado, and a former Broncos teammate of John Elway, Denver's executive vice president of football operations and general manager.

The two hires seem to fit the profile of what Joseph said he was looking for in an attempt to upgrade the offense. The Broncos were 27th overall in total offense (323.1 yards per game), 22nd in scoring, 27th in rushing and 31st in third-down efficiency.

"When you play offense that's attacking, it kind of makes you careful of your (defensive) calls,'' Joseph said Thursday. "When an offense is conservative, I loved it because I could be the attacker. But if an offense can be attacking, multiple personnel groups, multiple formations, that's what I want it to look like. I want to score points. I want offense with swagger, with tempo.''

The root of the Broncos' struggles was in the offensive line. Denver surrendered 40 sacks this season and allowed the quarterbacks to take far too much punishment. Siemian had surgery on his left (nonthrowing) shoulder after the season.

Both McCoy and Musgrave will be charged with Siemian's and Lynch's development. Elway and former coach Gary Kubiak, who retired after the 2016 season, have both said they believe these two QBs can be starters in the NFL. And Joseph threw open the competition at quarterback this week with a simple "whoever's better, plays.''

Both McCoy and Musgrave have called plays in offenses similar to the scheme the Broncos ran last season under Kubiak. As a result, the transition for Siemian and Lynch should be more efficient.