NEW YORK -- Kyrie Irving is back for the Brooklyn Nets, and his impact was immediate.

Irving had 21 points on 10-of-11 shooting to go with four rebounds and three assists, leading the Nets to a 108-86 victory over the Atlanta Hawks on Sunday at Barclays Center. He shot a career-best 90.9% from the field. Although Irving played only 20 minutes, Brooklyn had a plus-22 point differential while he was on the court.

"I love the game, man," Irving said in his walk-off interview afterward. "I missed it so much."

Irving was sidelined for 26 games due to a right shoulder injury. He recently returned to practice, and Nets coach Kenny Atkinson said pregame that the point guard would start.

"He is a phenomenal offensive player," teammate Spencer Dinwiddie said. "And we didn't exactly play the Legion of Boom."

Indeed, the last-place Hawks didn't present much of an obstacle, but Irving was prepared regardless. Three hours before tipoff, he was on the court shooting. He took jump shots and 3-pointers, whizzed around the court exercising his famous handles and practiced free throws.

By the looks of his pregame warm-up, bystanders wouldn't have been able to guess that Irving hadn't played since mid-November because of an impingement. He released shots without a hitch, even though his shooting arm required a cortisone shot last month.

Once the game tipped, the only shot he missed was his first.

Irving said last week that surgery could still be a consideration if there were no improvement, but he took part in full workouts during the week, gaining the confidence of Atkinson and his staff.

His effort helped Brooklyn to a second straight win following a season-high seven-game losing streak, and a renewed vigor was present from the team, both on the floor and on the bench.

"I mean, I just work on my game diligently, but you know you have nights like this," Irving said.

The Hawks' decision kept the fans from a Young-Irving matchup of the two Eastern Conference leaders at guard in fan voting for the All-Star Game.

Without Irving this season, the Nets are 13-13. Dinwiddie, who moved from the sixth man slot to starting point guard in Irving's absence, started alongside Irving, finishing with seven points and eight assists. The Nets had never started the two together. Jarrett Allen, Taurean Prince and Joe Harris also started. Typically, the Nets exercise extreme caution when it comes to bringing back injured players. Caris LeVert, who missed nearly seven weeks due to a thumb injury, was a starter before his surgery in mid-November. Sunday marked his fourth game back, and he has yet to start. LeVert had 13 points vs. the Hawks.

"We treat every player individually," Atkinson said pregame. "I can just say, yes, we are conservative, but we are about player care first and foremost."

In the locker room postgame, teammates marveled at Irving's shot efficiency. Wilson Chandler said he thought it was the "best return after an extended injury this season, alongside Paul George." Dzanan Musa mused that this is why the Nets committed such a large contract to Irving: "He's that good!"

The Nets next play back-to-back games, hosting Utah on Tuesday and traveling to Philadelphia on Wednesday. Irving said he expects to play in both games. 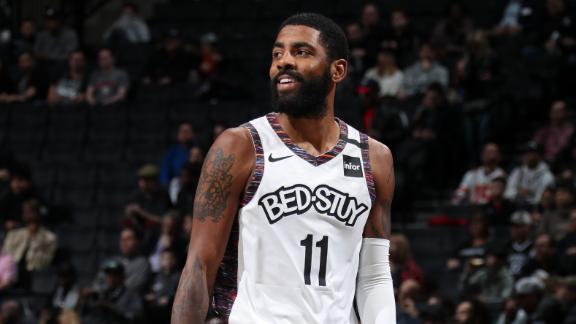