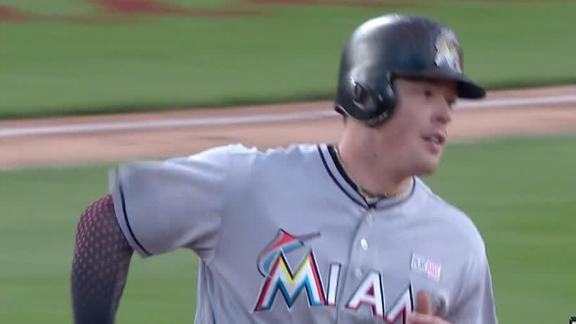 ESPN
By Eddie Matz
WASHINGTON --NationalsstarBryce Harperdropped his appeal and served a one-game suspension in the second game of Saturday's day-night doubleheader between Washington and Miami.

With Harper and three other regulars out, the Nationals managed just five hits against four Marlins pitchers in dropping the nightcap 7-1.

During the ninth inning of Washington's 5-4 win over theDetroit Tigerson Monday, Harper was in the dugout when he was ejected by plate umpire Brian Knight after Nationals shortstop Danny Espinosa was called out on strikes with the game tied 4-4.

After the ejection, Nats pinch hitter Clint Robinson connected for a game-winning home run. Harper, who by rule should not have been in the dugout after getting tossed, ran onto the field with his teammates to celebrate and appeared to shout profanity at Knight.

"I think the union, they'll take care of that and figure out what happens," Harper said Wednesday. "I think the only person that I'm pretty upset that saw it was my mom. I told her, 'Sorry.' I texted her after the game. So I think those are certain things that just happen. You live and you learn. Nothing I can do."

Since then, Harper appeared in two games for Washington before deciding to serve his suspension, including a 6-4 win over Miami in the opener of Saturday's twin bill. He went 0-for-2 in that game with three walks. Harper now has 23 walks in his past nine games and leads the majors with 40 total.

Although Monday marked the seventh time the 23-year-old slugger has been ejected in his four-plus major league seasons, this was the first suspension of his career.

Entering Saturday night, Harper had appeared in all 36 of the Nationals' games thus far this season, starting 35 of them. On April 24 against the Twins, he was not in the starting lineup but clubbed a ninth-inning pinch-hit homer that tied the game and sent it into extra innings. Washington ultimately won that game 6-5 in 14 innings.

Last year, when Harper became the youngest unanimous MVP in major league history, the Nationals went 6-3 in games he didn't play. Since Harper debuted in 2012, Washington is 63-55 in 118 games without him.