Bubbles burst? Stars, Blues, Devils, Panthers, Hurricanes could be on the outside looking in at playoffs 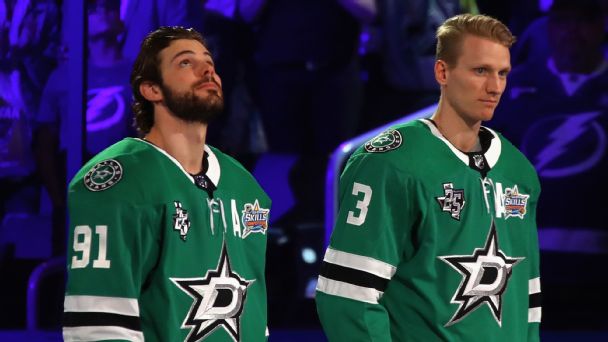 Which bubble team will miss the playoffs this year -- but doesn't deserve to?

Greg Wyshynski, senior writer:The Colorado Avalanche are starting to state their case as a playoff team, with Nathan MacKinnon willing them into the postseason. Which means we might be down to three teams for two playoff seeds -- the Anaheim Ducks, Dallas Stars and Los Angeles Kings. And, based on my extensive experience playing musical chairs, that means one of them is going to miss out.

I'm increasingly concerned that the Stars are going to be the team without a chair, staring at the Ducks and Kings comfortably seated in their playoff spots. The majority of Dallas' remaining games are on the road, where it is a completely different team. Too bad ... the Stars would have made for some fun playoff viewing.

Through Sunday's game against the Winnipeg Jets, the Stars have a plus-12 goal differential this season, higher than the three teams on the Eastern Conference bubble. They have Tyler Seguinand his 38-goal season, and John Klingberg, who -- with a revelatory 59-point campaign -- has established himself as an elite point-producing defender. With them, plus wings like Jamie Benn and Alexander Radulov, coach Ken Hitchcock has a compelling group.

If Dallas does miss the playoffs, some of it will simply be because of bum luck. Goalie Ben Bishop's injuries have been an issue. Martin Hanzal, a key offseason acquisition, has been a bust and limited to 38 games because of injury. Marc Methot, another key offseason pickup, has been limited to 28 games because of injury. But some of it has been of the Stars' own making, such as underwhelming play at even strength and digging holes they couldn't climb out of. Dallas is 2-20-2 when trailing entering the third period. And then there's whatever the heck happened with center Jason Spezza this season.

But overall, this is a team that could be playoff caliber if it was at full strength and if everyone played to his potential. I wish that were the case for GM Jim Nill, who made several bold decisions to turn this team around and is someone I would have liked to have seen vindicated. At the very least, it would have been nice to see Seguin in the playoffs with the Stars, as he's played only seven postseason games for Dallas.

Emily Kaplan, national NHL reporter:I'm such a sucker for the 2017-18St. Louis Blues.I hate that there's a chance we won't see them in the postseason. Through the end of December this season, the Blues had led the Central Division for all but 10 days. Not only were they outperforming expectations -- remember, most people initially wrote off St. Louis this season because of its horrible injury luck -- but the Blues were a really fun team to watch. They were stingy on defense and stellar on offense, with one superstar line (Brayden Schenn, Jaden Schwartz and Vladimir Tarasenko) that could go toe-to-toe with any great line in the league. And then it all crumbled.

When we write the season obituary for the Blues, it will be easy to point to a six-game, 14-day slide leading up to the trade deadline that precipitated the surprising trade of Paul Stastnyto theWinnipeg Jets,and a midseason goaltending slump, as causes of their demise.But the biggest problem for the Blues is that they peaked too soon. I wish they were still playing like that team we saw in October and November. Then again, after Sunday's come-from-behind overtime win against theChicago Blackhawks-- which Tarasenko sat out with an upper-body injury -- the Blues have inched to within one point of the final wild-card spot. So maybe there's a chance for redemption after all.

Chris Peters, NHL prospects writer: The Florida Panthers have made a valiant effort the over the past six weeks to get back into contention. The past two seasons have been tumultuous in South Florida, but it looks like Panthers coach Bob Boughner is getting things back on track. His team dug itself an early-season hole, and its late run might be too little, too late for a playoff spot this season. But this late push has to be hugely beneficial to the organization's psyche after some upheaval set the Panthers back a little bit.

Since Jan. 30, the Panthers have the second-best record in the NHL. They're 16-5-1 over that span, second only to the Nashville Predators. They're not dead yet, but sitting five points out of a wild-card spot with 13 games to go feels a little steep, even given how well they've played down the stretch.

The unfortunate thing is that the Panthers have finally gotten a pretty healthy season out of Aleksander Barkov. He is three games from equaling the most he has played in a season, 71 in 2014-15, and he already has 70 points, by far a career best. Meanwhile, centerVincent Trocheck continues to build up his game and has also set career highs with 28 goals and 66 points. Throw in Jonathan Huberdeau andEvgenii Dadonovand Florida has four 20-plus goal scorers on its roster. Meanwhile, veteran goalieRoberto Luongo has given the Panthers good starts and James Reimer has gotten stronger between the pipes.

All of Florida's core offensive players remain under contract for multiple years as well, plus the team likely will be able to add top prospects Henrik Borgstrom and Owen Tippett to its lineup next season. That all puts the Panthers in good position to stay in postseason contention for a while. They just need to make sure they have a better start next season. As we've seen, when they're on their game, they're a handful for anyone.

Ben Arledge, editor: I'll go a little rogue here and pick a team currently sitting in a playoff berth. Yes, the New Jersey Devils are currently holding down the second wild-card spot in the East, but few teams have been hotter than the Panthers of late, and Florida trails New Jersey by just five points with three additional games left to play. I'm not sure the Devils will be able to hold off the surging Panthers, and if they can't, they will be on the outside looking in come mid-April. And the thing is, that's exactly where most people assumed the Devils would be. The rebuild was expected to last at least another year, but New Jersey exploded this season. So in the playoffs is also where they deserve to be.

Taylor Hall is the midst of the best year of his career, while rookies Nico Hischier, Jesper Bratt and Will Butcher are all making sizable contributions. The addition of Sami Vatanen made a big difference on the back end, providing the power-play quarterback the Devils have needed. At the deadline, New Jersey went out and added two assets in Michael Grabner and Patrick Maroon on pretty good deals; I thought the Grabner deal in particular was a steal.

What's even more impressive is the fact that New Jersey was missing Cory Schneider in the crease for a good chunk of the season, having to rely instead on Keith Kinkaid and Eddie Lack. If Schneider were healthy (and playing closer to his career numbers), who knows where the Devils would be.

The fact is, New Jersey has played well enough to be a playoff team. The Devils might have been a surprising contender this season, but they are also a deserving contender. A late push from Florida might just keep them, out, but I expect them to be in the mix out of the Metropolitan for quite some time going forward.

Sean Allen, fantasy columnist:The Carolina Hurricanes should have broken through for a postseason run this year with what will be a competitive roster in the coming seasons. Despite leading the league in team Corsi and limiting shot attempts better than any other team except the Boston Bruins, the Hurricanes are well out of the race in the Eastern Conference.

Scott Darling, who I'll readily admit looked like a short-term solution in the crease for the Hurricanes, turned into a pumpkin with the pressure of being a No. 1 goaltender.Justin Faulk's offense all but dried up for the first several months of the season. The young core that needed to find consistency --Teuvo Teravainen, Sebastian Aho, Noah Hanifin -- ran hot and cold all season long.

The Hurricanes still have the pieces to be a competitive team in the coming years, but they are going to need goaltending that can take advantage of the limited chances opponents are getting. The Hurricanes have lost nine games in regulation by one goal this season and have allowed a total of nine empty-net goals (suggesting there were more close games); if a dozen or so of those games had gone a different way, all of a sudden they are in the thick of it for the Metropolitan Division.
Report a correction or typo
Related topics:
sportsespnpostseasonst louis bluesjohn klingbergnew jersey devilswild cardflorida panthersstanley cup playoffsstanley cuptyler seguinnhlcarolina hurricanesdallas starseastern conferencewestern conference
Copyright © 2022 ESPN Internet Ventures. All rights reserved.
TOP STORIES
Bicyclist struck and killed by MTA bus in Queens
AccuWeather Alert: Spotty storms
Police shoot driver after vehicle strikes officer in Brooklyn
Bethpage Air Show cancels remainder of Saturday lineup due to weather
NYC beaches officially open to swimmers this Memorial Day weekend
Police inaction moves to center of Uvalde shooting probe
Jury's duty in Depp-Heard trial doesn't track public debate
Show More
Texas gunman threatened rapes, shootings on Yubo app, users say
VP Harris tells Buffalo mourners: Stand up for what's right
Woman gets 15 months in prison for punching flight attendant
Jersey Shore, businesses prep for busy Memorial Day weekend
Texas survivor apologized to dad for blood on clothes, losing glasses
More TOP STORIES News