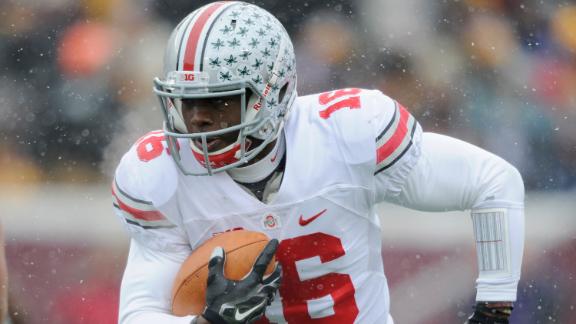 COLUMBUS, Ohio -- Both Ohio Statequarterbacks are willing to accept whatever decision is made by coach Urban Meyer as to who starts, just as long as it isn't split.

J.T. Barrett and Cardale Jones have been widely praised for their close relationship and willingness to take on whatever role is best for the Buckeyes during their heated training camp battle to lead the defending national champs. Both Jones and Barrett, however, have made it clear they would rather settle into a backup role if they come up short in the two-man race rather than deal with a rotation throughout the season.

"I don't think it would be as efficient," Barrett said of a rotation. "I did that in high school and switched every series ... and that's kind of tough to do being that you can't get into a rhythm, get a real vibe off the defense.

"I don't think it would be the best idea."

Meyer has famously made it work before in his career, alternating between Chris Leak and Tim Tebow on the way to a national championship at Florida in 2006. And his track record at least opened up the possibility that Ohio State might use the physical, 6-foot-5 Jones and the quicker Barrett in some sort of rotation given the somewhat different skill sets each brings to the offense.

But even while acknowledging that he was "pretty sure coach Meyer could make it work," Jones also cast his vote for declaring a definitive starter when training camp ends and allowing that player to focus on the first-team snaps.

"I don't think it's a great idea," Jones said. "I don't think you could get in a rhythm. In a two-quarterback system, if I run three plays and run off the field and J.T. runs out for a drive, I don't know how well that would work with rhythm and timing with guys.

Meyer still has time before the Sept. 7 opener at Virginia Tech to decide which one it ultimately will be, and he has indicated he won't reveal his starter until he takes the field for the first snap.

Either way, the Buckeyes aren't expecting any chemistry issues or disruption, particularly because both Jones and Barrett have made their feelings on the matter well known.

"They're both working their tails off, and it's one of the most refreshing competitions I've ever witnessed," Meyer said. "This one is very genuine ... I mean, they really encourage each other, they push each other.

"I think it's very unique."