ESPN
By Nick Friedell
CHICAGO -- Bulls guard Dwyane Wade left Wednesday night's 101-99 win over the Brooklyn Nets in the fourth quarter because of a migraine. He did not return.

It marked the second known time in less than a week that Wade dealt with a migraine. He missed shootaround on Friday in advance of a game against the Charlotte Hornets because of a similar issue before he played that night.

"It's OK," Wade said after the game. "I had a headache before the game. I took a fall in the second half. I didn't hit my head, but I guess the way my body jerked and reacted, it kind of triggered my headache back. I lost a little vision in [my] eye. So I came out on the court, couldn't see the rim. My wife was talking, I couldn't see her. So I decided to come out and come in the back and put ice on my neck and take some medicine, get my neck massaged because it's muscular when it happens like that."

Wade admitted that there was a chance he might have re-entered the game had Jimmy Butler not knocked a game-winning jumper at the buzzer.

"When I came into the locker room, [the Bulls] asked me, 'Do you want us to say that the night's over?' I said, 'No, keep me as questionable because they may need me for overtime.' So I was in here trying to get ready, prepare myself for overtime."

Asked if he would actually have played in overtime, Wade added: "I don't know. It didn't get there. My eyes did start feeling a little better. I can see you right now, so I'm OK, but I'm not totally out of it. I can still feel a little bit in there. But you never know. We didn't have to get to that point because No. 21 bailed us out."

Butler also left the game for a few minutes in the fourth quarter after rolling his right ankle on Randy Foye's foot. He said the injury hurt "really bad," but he felt he could continue to play, even after being helped to the bench.

"I knew I would," Butler said. "Because D-Wade was in the back, so I needed to come out here and put on for D-Wade."

Butler finished the game with 40 points, but even he knew Wade was in some pain. Wade asked cameramen not to put the bright lights on him in the locker room after reporters were granted access.

"Whenever I was at the free throw line and I walked back to talk to him, I saw him. He was out of it," Butler said of Wade. "I just want my guy to be OK because we definitely need him." 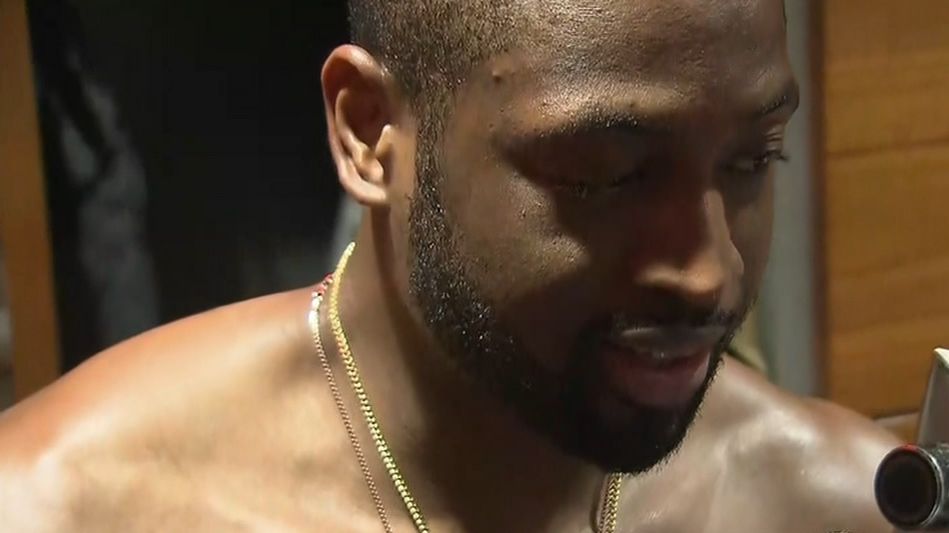