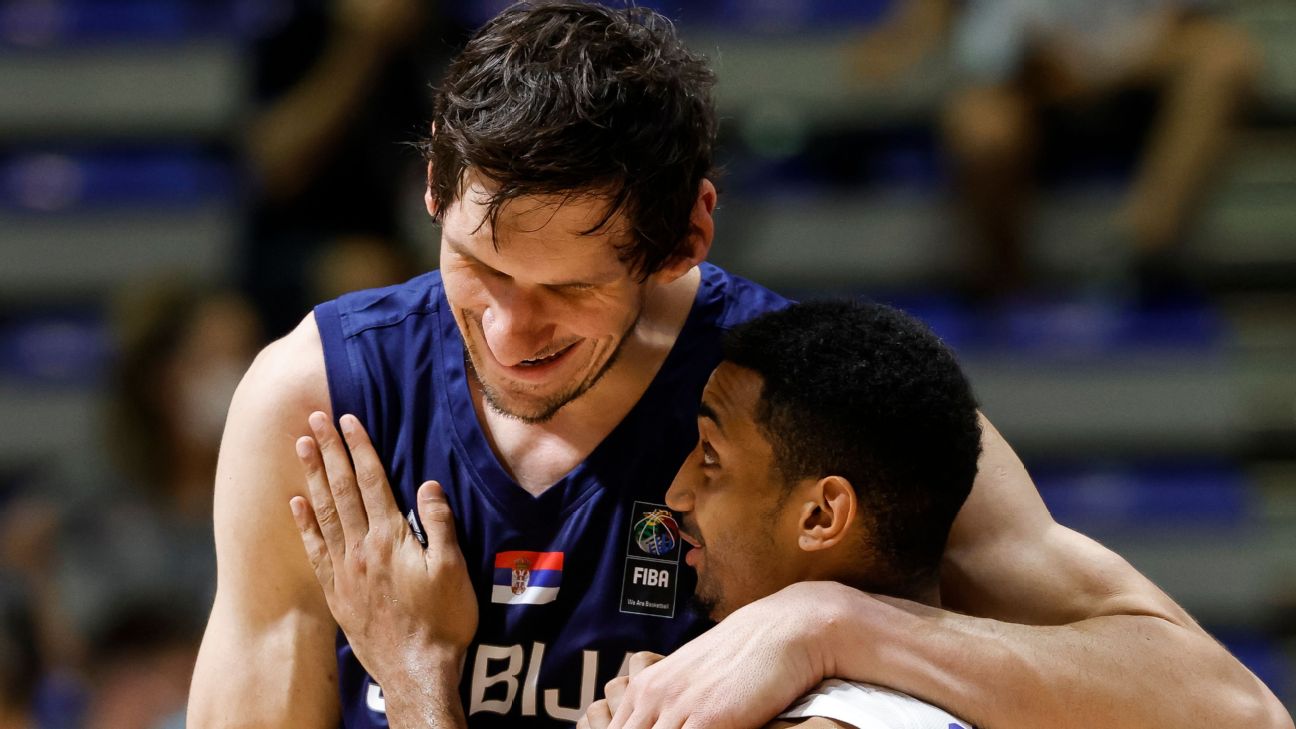 Andrew Wiggins and Canada survived their first test in the Olympic Qualifying Tournament.

Wiggins scored 23 points, RJ Barrett added 22 and Canada held off Greece 97-91 in Victoria, Canada, in the first game at that site's qualifier, one of four that began Tuesday.


Nickeil Alexander-Walker scored 18 for Canada, which trailed by as many as eight points late in the first half. The Canadians took the lead for the good midway through the third quarter, then held on at the end.

Canada coach Nick Nurse, the coach of the Toronto Raptors, made clear that his team doesn't expect any game to be easy.

"We're not under any illusions of how good these teams are that we're playing, and how experienced they are, and what traditions they have," Nurse said. "It never entered our minds that it wasn't going to be really hard. I think winning any game is really hard, and then when you're playing in meaningful competition, a good team, a physical team, a big team and a well-coached team, you're going to be put under some duress."

There are four qualifying tournaments -- hosted by Canada, Serbia, Lithuania and Croatia -- to determine the last four spots in the 12-team field for the Tokyo Olympics. Those four spots will all be determined Sunday.

"I can't ask any more out of these guys," said Greece coach Rick Pitino, the Basketball Hall of Fame coach now at Iona College. "We're all disappointed in losing, but we're hoping we can see Canada again."

Canada next faces China on Wednesday, while Greece plays China on Thursday.

Cedi Osman scored 27 points and Turkey won a back-and-forth nightcap in Victoria, ending the game on a 31-14 run.

Alperen Sengun scored 15 points for Turkey, which wasted an 11-point early lead and then rallied in the final minutes.


Omer Yurtseven scored the last seven points of a 10-0 run that gave Turkey a 37-26 lead, its biggest of the game, midway through the second quarter. Uruguay chipped away and led by as many as eight in the fourth, before Osman's 3-pointer with 4:01 left rattled in to put Turkey ahead to stay.

Jayson Granger had 25 points and 10 assists for Uruguay, which got 16 points from Mathias Calfani.

Other brackets were in play on Tuesday as well:

Serbia's quest to return to the Olympics got off to a good start.

Boban Marjanovic scored 18 points and grabbed 10 rebounds, and the silver medalists from the 2016 Rio de Janeiro Games opened their Olympic Qualifying Tournament with a 94-76 win over the Dominican Republic.

The game was tied at 69-all early in the fourth quarter; Serbia, which is playing host to the qualifier in Belgrade, outscored the Dominicans 25-7 the rest of the way.

"Of course, we're proud," Marjanovic said. "Everybody who comes here wants to make the Olympic Games, the main thing. Everybody's fighting for that spot, everybody plays tough, good, and I'm proud of my team because we didn't give up in this game."


"As expected, it was a difficult game," Serbia coach Igor Kokoskov said.

Michael Torres Cuevas and Victor Liz each had 16 points for the Dominican Republic.

* LITHUANIA 76, VENEZUELA 65: Jonas Valanciunas had 20 points on 8 of 9 shooting, plus 11 rebounds for Lithuania. Domantas Sabonis and Mantas Kalnietis each scored 12 for Lithuania, which closed the first half on an 8-0 run to break a tie and kept the lead the rest of the way. David Cubillan scored 11 points for Venezuela.

* POLAND 83, ANGOLA 64: Mateusz Ponitka scored 22 points in 23 minutes, A.J. Slaughter added 16 and Poland had little trouble in its opener. Angola led 19-18 late in the opening quarter; Poland took control by scoring 28 of the game's next 40 points. Yanick Moreira had a game-high 27 points for Angola.

* GERMANY 82, MEXICO 76 Germany used an 18-3 run in the fourth quarter to pull off a come-from-behind win, forcing Mexico into 10 consecutive misses from the field during part of that stretch. Joshiko Saibou led the Germans with 17 points. Francisco Cruz led all scorers with 30 points for Mexico.

* BRAZIL 83, TUNISIA 57: Vitor Benite scored 15 points, and Brazil pulled away steadily over the final three quarters to an easy opening win. Oussama Marnaoui scored 13 for Tunisia. The game was tied 21-21 after the opening quarter, and Brazil outscored Tunisia 62-36 the rest of the way.