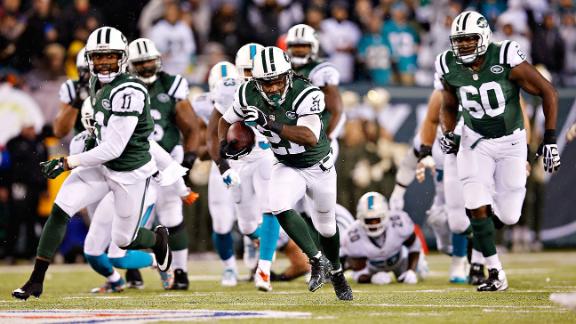 The Arizona Cardinals have made a one-year offer to running back Chris Johnson, sources told ESPN's Dianna Russini on Tuesday.

Johnson, who became an unrestricted free agent after the New York Jets declined to exercise their option after the 2014 season,recorded career lows for carries (155), rushing yards (663) and rushing touchdowns (one) last season after signing a two-year, $8 million deal.It was the first time in his seven-year career that he failed to rush for 1,000 yards in a season.

He was arrested in Orlando, Florida, during the offseason for openly carrying a weapon, but officials decided not to pursue charges. In a separate incident, he also was shot in the right shoulder during a drive-by shooting that left a friend with bullet wounds and the driver of their car dead.

Cardinals coach Bruce Arians said Monday that he was "just not pleased with where we're at right now" in relation to the running back position. Andre Ellington and rookie David Johnson have both missed time because of hamstring injuries, with Ellington returning to practice Monday after missing a week.

"I'm not pleased with the amount of time that [Ellington] and David have lost," Arians said.

With 8,628 yards, Johnson is the fifth-leading active rusher in the NFL and is one of only seven players to rush for 2,000 yards in a season.