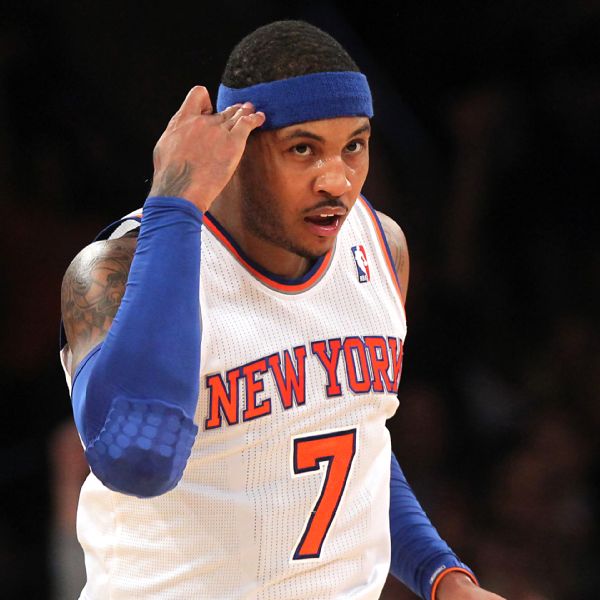 NEW YORK -- Carmelo Anthony believes the perception of the Knicks during his tenure with the club had a negative effect on its chances to land a top free agent.

"I think just the business. Everything that was going on. The perception of New York Knicks ... not basketball but the organization," Anthony said Thursday when asked what kept the Knicks from landing a top free agent when he was there.

"I think it probably scared a lot of people away. Scared some people away. Not knowing the nuances and the ins and outs of kind of what was going on, who is in charge, who is not. So it was more than just basketball when it came to people making those decisions," he said.

But New York couldn't get a top-tier free agent to sign in either year. In the summer of 2016, the Knicks didn't get a meeting with free agent Kevin Durant, and signed Joakim Noah to a four-year, $72 million contract after trading for Derrick Rose, his teammate with the Bulls.

During Rose and Noah's first season in New York, the relationship between Anthony and Jackson publicly deteriorated, leading to a negative perception of the club among some NBA players. Anthony was traded to Oklahoma City prior to the 2017-18 season by president Steve Mills and general manager Scott Perry.

Mills believes the perception of the Knicks has changed recently. The club plans to pursue a top free agent in the 2019 offseason. Anthony, in Brooklyn on Thursday to practice with the Houston Rockets ahead of Friday's meeting with the Nets, was complimentary of first-year Knicks head coach David Fizdale.

"I think we all have to start from somewhere. And I think what Coach David is doing over there, he's getting it right as far as mindset goes," Anthony said. "The talent will come, but I think the mindset of how he approaches the game trickles down to the organization, how serious he takes the game, his approach to the game. You could just tell by the energy he brings."

After a disappointing season in Oklahoma City in 2017-18, Anthony was traded to the Atlanta Hawks in the offseason and bought out of the final year of his contract. He then signed with the Rockets.

Houston is 1-5 entering Friday's game against the Nets; Anthony has said that he's still getting comfortable with his role on the Rockets.

Chris Paul, Anthony's close friend, said he had to adjust his approach on offense significantly last season, his first in Houston. Paul believes Anthony will grow accustomed to the offense, which de-emphasizes the midrange shot, as Paul himself did.

"Melo comes in every day, gets his shots up, gets his work done and all that different type of stuff. He's great for the younger guys. He's going to be fine," Paul said.

Through six games, Anthony is averaging 13.2 points on 37 percent shooting in 31 minutes per game.

Regarding his Knicks tenure, Anthony said Thursday that he hadn't had a chance to fully reflect on it. Anthony's Knicks made three playoff appearances and won one playoff series -- the franchise's only playoff series victory in the past 17 seasons.

"Honestly, I didn't have a bad experience there," Anthony said. "Overall, looking back on it now, I had a great, great experience in New York. Last couple years was a little tough as far as losing and what I had to deal with, but other than that I had a helluva experience in New York. That energy with the fans, the team and the players that came through there. My time there, overall I had a helluva experience. The last couple of years, it is what it is. But, overall it was great."
Report a correction or typo
Related topics:
sportsespnnew york knickscarmelo anthonyhouston rocketsnba
Copyright © 2021 ESPN Internet Ventures. All rights reserved.
More Videos
From CNN Newsource affiliates
TOP STORIES