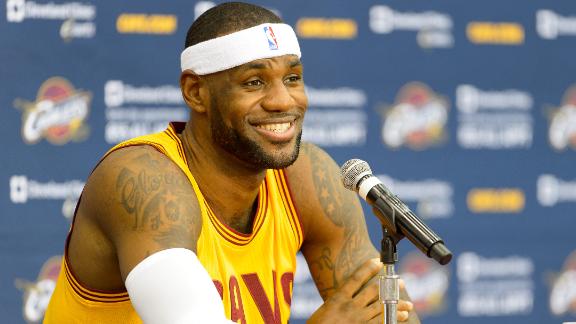 INDEPENDENCE, Ohio -- Cleveland Cavaliers coach David Blatt said Friday he is open to the idea of resting LeBron James at times during the season to keep the star forward fresh for a postseason run.

James sat out the morning practice session of Cleveland's two-a-day Friday in order to rest his back. Earlier this week, James described his back as feeling "iffy" and only played in two out of three periods during the Cavs' intrasquad scrimmage Wednesday.

Friday was the first practice that James missed since training camp opened a week ago.

Blatt downplayed the development, pointing out that several other veterans -- Mike Miller, Anderson Varejao and Shawn Marion -- have also been given time off for "maintenance." He added that James planned to participate in Friday's second practice session in the evening.

The coach did not rule out James getting scheduled rest periods -- including possibly sitting out games -- as the season goes on, however.

"Certainly could," Blatt said. "It's not specifically planned at this point. In other words, we didn't sit down and already write up a plan for what game he would miss or what practice he would miss, but it could [happen] depending on need."

James is expected to play when the Cavs take on Blatt's former team, Maccabi Tel-Aviv, in their first preseason game Sunday.

James has played in 842 out of a possible 886 regular-season games during his first 11 years in the league, but the former prep-to-pro phenom turns 30 in December. The body changes over time.

James, who has played close to 40,000 minutes during his career, went on a strict, 67-day diet during the offseason in order to shed weight, but he has balked at the notion that the wear and tear is catching up to him.

"I'm 29 years old, and I can still fly above the rim," James said on media day. "I don't need to lose weight to do that, not at this point in my career."

Blatt said he watched from afar as San Antonio Spurs coach Gregg Popovich pulled players out of the lineup at various times in recent seasons to try to preserve them for the playoffs.

"I noticed a lot of what Pop does because he does it pretty well," Blatt said. "In my last years in Europe, I was coaching close to 80 games each year. I know what it is. The travel was a lot harder where I was than it was here.

"Players are here to play, and it's our job to get them ready and keep them healthy so they can participate in every game, but it doesn't always work out that way. Sometimes you have to know how to rest guys without the team being at risk. That's part of the process."

Popovich was famously fined $250,000 by former commissioner David Stern for sitting out Tim Duncan, Tony Parker and Manu Ginobili for a game against James and the Miami Heat during the 2012-13 season.

Blatt was asked if he could be facing a similar punishment from new commissioner Adam Silver for employing the same coaching tactic this season.

"That's a leading question," Blatt said with a laugh. "That's kind of like saying, 'Here's the jury, here's the court, are you willing to be punished for a crime that you haven't yet committed?'"

Regardless of how Blatt chooses to manage James' playing time, the coach expressed that the four-time MVP taking a practice off is not something that concerns him in the least.

"This is really, really insignificant if you ask me, in the grand scheme of things, if LeBron sits out a practice," Blatt said. "And I value practice probably more than most. But the fact that we may need to rest him and others at different points during the preparation process and even during the season, in my mind, it's the right and the smart thing to do.

"It's not a sprint, it's a marathon. And we have to be conscious of keeping these guys fresh and healthy and ready for the games ahead."

ESPN The Magazine: Cavs' Plan To Bring LeBron Back To Cleveland
Brian Windhorst discusses the Cavs' plan to lure LeBron James back to Cleveland, which started hours after James announced he was leaving for the Heat.