CC Sabathia, Gary Sanchez among Yankees to exit in loss to Orioles 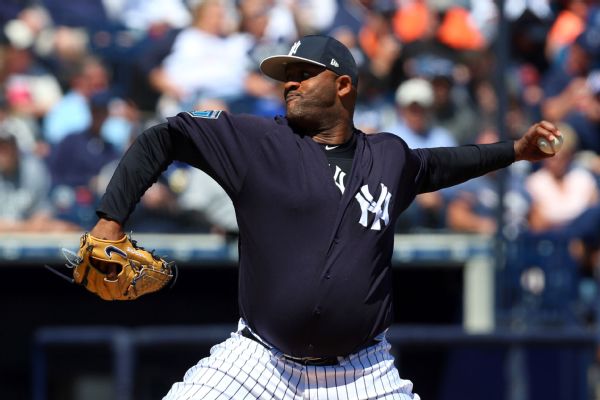 ESPN
By Coley Harvey
NEW YORK -- Injuries and illnesses piled up for the New York Yankees during Friday night's 7-3 loss to the Baltimore Orioles as four players were forced to leave early. Left-hander CC Sabathia was among them, exiting with right hip soreness.

An MRI came back clean, the veteran starter said, but the Yankees placed him on the 10-day disabled list Saturday.

"It was sore, and I've never felt that spot before -- in ever, throwing a baseball -- so it was a little nerve-wracking," Sabathia said.

The banged-up Yankees also lost catcher Gary Sanchez and infielders Brandon Drury and Tyler Wade during the game. Drury is joining Sabathia on the 10-day DL due to severe migraines.

Sabathia left Friday's game after pitching the first four innings of the Orioles' 14-inning win. He allowed four hits and three runs on only 58 pitches. He didn't show signs of trouble with the hip while he was on the field, but he said he started feeling the soreness as he finished his warm-up pitches in the third inning.

Throughout his outing, Sabathia was touched up by the Orioles, allowing three home runs. Manny Machado hit two, and Chris Davis hit another.

Machado got Sabathia's start off to a rocky start when he launched a one-out, first-inning homer into the second deck down the left-field line. In his next at-bat, Machado drove an 89 mph fastball into left-center field for his second homer off Sabathia.

Machado's five homers off Sabathia are the most he's had against any pitcher in his career. It marked the shortest start of the young season for Sabathia. He lasted five innings and threw 84 pitches in his season debut last week at Toronto.

Sabathia, 37, was mostly healthy in spring training. He had an ankle injury that sidelined him briefly, but otherwise he made it to the regular season with no injury issues. Last season, he spent time on the disabled list with a strained left hamstring and right knee inflammation.

Drury and Wade were replaced in the sixth and ninth, respectively. According to Boone, Drury had issues with migraines and blurred vision. Wade was dealing with flu-like symptoms.

Asked after the game how he felt, Wade simply said, "Not good."

Sanchez was removed in the 14th inning after clutching his right calf in between pitches. He and Boone said he was cramping, and that he'll be evaluated further Saturday morning. By the point when he came out, Sanchez had caught more than 250 pitches from Yankees pitchers.

"I just got to wait and see how I feel [Saturday]," Sanchez said through a translator. "It's the first time it happened to me."
Report a correction or typo
Related topics:
sportsespnmlbmrinew york yankeescc sabathiahip
Copyright © 2020 ESPN Internet Ventures. All rights reserved.
More Videos
From CNN Newsource affiliates
TOP STORIES