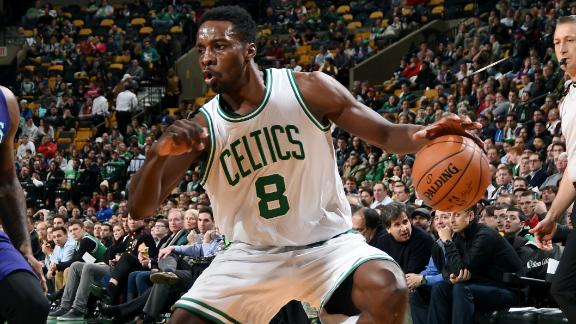 The Boston Celtics continue to stay busy on the trade front, shipping newly acquired center Brandan Wright to the Phoenix Suns on Friday and, according to league sources, agreeing to terms on a trade that will send forward Jeff Green to theMemphis Grizzlies.

The Celtics, in full rebuild mode in the wake of last month's trade that sent Rajon Rondo to Dallas, announced the deal to swap Wright to Phoenix for a conditional future first-round pick via Minnesota before Friday's overtime loss in Indiana. Boston also created a trade exception worth $5 million in the process by sending out Wright's $5 million contract while taking back no salary.

In the bigger trade, meanwhile, sources say that the Celtics and Grizzlies, in a deal first reported by ESPN.com, are in the process of finalizing a swap that will send Green to Memphis in exchange for Tayshaun Prince's $7.7 million expiring contract and another future first-round pick.

It is possible, sources say, that Boston and Memphis will recruit a third team to join the final trade construction, but one source told ESPN.com that the trade will "most likely" happen with or without a third team.

Green was scheduled to start for Boston at Indiana but did not take the floor with his teammates and was ultimately pulled from the starting lineup and replaced by Jae Crowder. He did not join the team on the bench.

Celtics coach Brad Stevens wouldn't address the reports about Green's future after Friday night's game, but he did offer, "I can tell you [Green] won't be with us this weekend."

Asked how a coach prepares for a night like Friday, when the roster is altered right before tipoff, Stevens told reporters, "Go to the batting cage and try to hit a curveball once in a while instead of just fastballs. Stay on your toes and be ready -- the hardest part is not that, though, it's the human element to everything.

"It was very different. It changes your pregame speech a little bit. It's a jolt to your system."

Celtics players, including Avery Bradley, whose 3-pointer in regulation helped force overtime against the Pacers, downplayed the roster shakeup, noting it's "part of the business."

Prince, meanwhile, was informed of the looming trade by Memphis officials but still played 25 minutes and scored six points in the Grizzlies' 106-95 loss to the Pelicans on Friday night. The fact that he played posed no real issues for the Celtics because they're essentially taking him back for Green because he possesses an expiring contract.

ESPN.com reported earlier this week that the Grizzlies were aggressively pursuing Green or Miami Heat swingman Luol Deng in hopes of bolstering their wing rotation in the ever-competitive Western Conference. Green became the focus over the last 48 hours, sources said, when it became apparent that Miami was not yet ready to entertain offers for Deng, who is not even halfway through the first year of a two-year, $20 million contract.

The Celtics and Grizzlies, sources said, have been exchanging trade proposals on Green for some time, with Boston ultimately deciding that it was best to trade the 28-year-old now as they continue to stockpile future assets, since Green is expected to opt out of the final year of his contract in July and become a free agent, meaning he could potentially leave without compensation.

The Celtics are nowarmed with what's likely to be six first-round selections and 14 total picks over the next two drafts. Not only does that allow Celtics president of basketball operations Danny Ainge to add to his intriguing young nucleus, but the picks will aid him both in maneuvering around the draft board and allowing him to seek established talent via trades.

The Celtics are banking that their surplus of picks, some valuable trade exceptions, and developing young talent will help accelerate the rebuilding process that was stuck in neutral this season and prompted the change of direction that started with Rondo's departure last month.

Information from ESPN.com's Chris Forsberg and The Associated Press is included in this report.