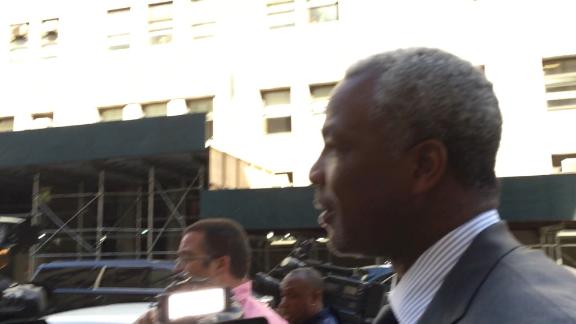 ESPN
By Ian Begley
NEW YORK -- Knicks legend Charles Oakleyon Friday rejected an opportunity to have charges stemming from a February incident at Madison Square Garden dismissed and requested a trial to fight those charges.

Assistant District Attorney Ryan Lipes on Friday offered Oakley an adjournment in contemplation of dismissal -- an agreement that would lead to charges being dropped if Oakley stays out of trouble for a set time and complies with an unspecified order of protection. Oakley, through attorney Alex Spiro, rejected that offer and requested a trial.

Watters granted Spiro's subpoena requests for documents at Madison Square Garden. Spiro also stated in court that he has a list of witnesses that he would like to call on during trial, but he did not specify which witnesses he would use.

Cameras on the night of the incident showed Oakley striking Madison Square Garden security as they attempted to remove him from his seats. Oakley was physically removed from his seats by the arena's security staff.

Shortly after the incident, Knicks owner James Dolan suggested that Oakley had a problem with alcohol and anger management issues. Dolan was criticized by many current and former players for making those claims. Oakley has denied that he has a drinking problem and denied any wrongdoing at Madison Square Garden. He has said that he felt targeted by security.

NBA commissioner Adam Silver and Charlotte Hornets owner Michael Jordan met with Dolan and Oakley shortly after the incident in an attempt to end the public dispute. Dolan extended an invitation to Oakley to Madison Square Garden, but Oakley rejected the offer.

Oakley has said that he doesn't know if he will ever return to Madison Square Garden due to raw feelings from the incident and previous issues.

Oakley, who played for the Knicks from 1988 to 1998 and helped them reach the NBA Finals, had a poor relationship with the team and Dolan prior to February due in part to his criticisms of the team and owner.