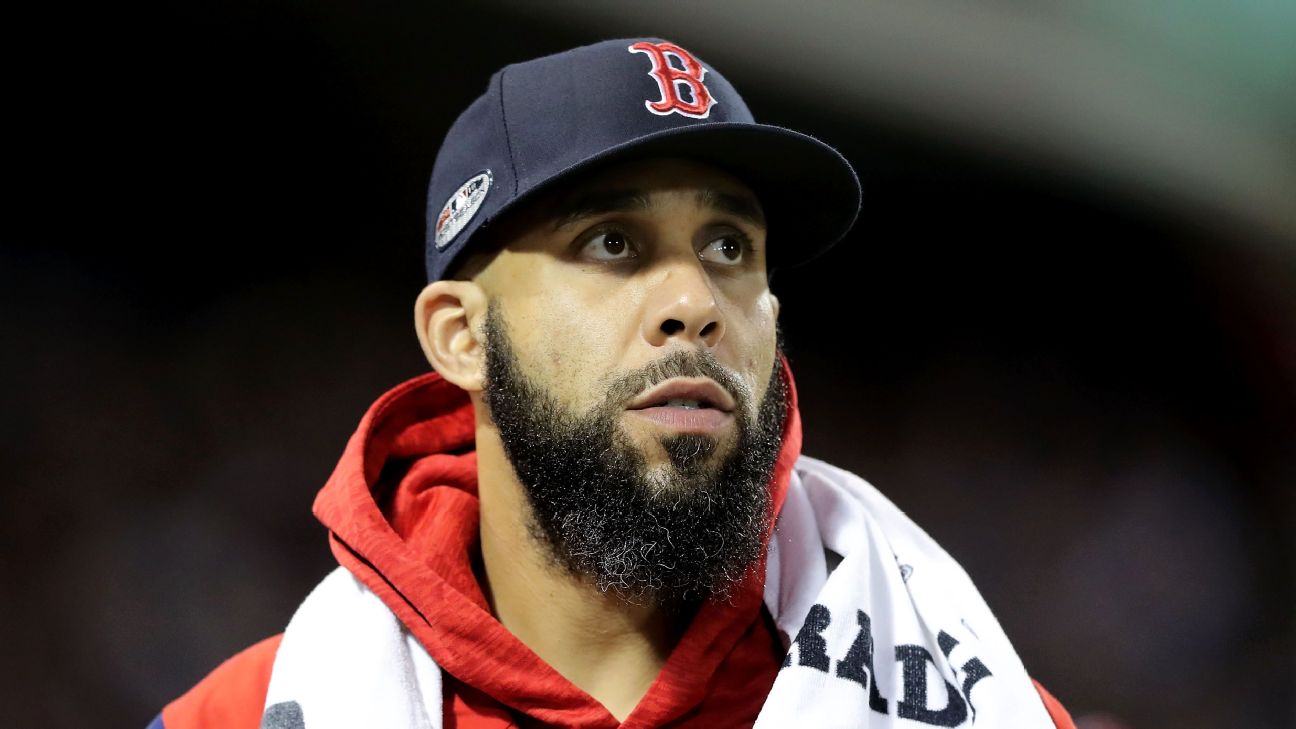 BOSTON -- This is postseason baseball. You hope for your stars to carry the team and produce plenty of decisive plays, but you know that any game -- any series -- could come down to one of the unlikeliest of contributors getting a key out or critical hit.

The Boston Red Sox beat the New York Yankees 5-4 in Game 1 of this highly anticipated American League Division Series between two 100-win teams on Friday, and their stars delivered. Chris Sale took a 5-0 lead into the sixth and finished with eight strikeouts in 5 innings. J.D. Martinez lined a three-run homer over the Green Monster off J.A. Happ in the bottom of the first. Mookie Betts started a two-run rally in the third with a double high off the wall in deep left-center and added a nice running catch near the right-field foul pole with a runner on.

While Sale's performance eased some of the concern about his health and ability to perform after pitching sparingly the final two months, the bullpen worked itself into some trouble -- and out of some trouble. In the end, it survived, even if it gave Red Sox fans a few heart attacks along the way.

Sox manager Alex Cora was the bench coach with the Houston Astros last season when they won the World Series. "One thing I learned last year, to win a World Series is going to take 25, 27 guys to do it, regardless of their roles," he said after the game. "To get 27 outs at this stage right now is very difficult, and sometimes you have to go to Plan B or Plan C."

Indeed, before the game, Cora talked about learning from A.J. Hinch's managing the Astros last postseason and having to make adjustments on the fly in handling a pitching staff. Cora had to do that in this game -- even using starter Rick Porcello to get the first two outs of the eighth inning. "Might say [Plan] C and a half probably," Cora admitted after the game.

It all started with Sale. He was effective, if not quite the dominant pitcher we saw in midseason when he was cranking upper-90s velocity and threw zeroes in five out of six starts at one stretch. He threw 24 pitches in the first inning and settled down after that, mixing in four-seamers that touched 96 mph a couple of times and keeping the Yankees off balance with a dancing mix of sliders and changeups. When Aaron Judge and Giancarlo Stanton reached on hard-hit singles in the sixth, he was out after 93 pitches.

"I go based on what my catcher says," Sale said, giving props to Sandy Leon's work behind the plate, "and that was Sandy's game plan tonight." While it felt like Sale was throwing an unusual number of sliders, his pitch percentages were essentially on par with his seasonal averages. "You know, AC [Cora] said something to me the other night that really stuck, that was, win the first pitch and then win every pitch after that. I threw every pitch tonight like he was going to take the ball out of my hand after the pitch."

When Cora finally did take the ball from Sale, the Red Sox were up 5-0. A few minutes later it was a 5-2 game with the bases loaded and two outs and Brandon Workman -- arguably the 11th pitcher on Boston's 11-man staff -- pitching to Gleyber Torres, the heralded rookie who hits ninth in the Yankees lineup.

Workman got ahead with a swinging strike, then fell behind with three balls. Torres took a fastball on the outside corner to make it a full count. One pitch could change the complexion of the game, shift all the energy to the Yankees, or find Boston suddenly at a deficit. Nobody was warming up. No margin for a mistake. Workman threw a curveball that tumbled below the knees, Torres swung and missed, Workman pumped his fist in celebration, and Fenway erupted. Crisis averted.

At least for that inning. The Yankees loaded the bases again in the seventh, but Matt Barnes struck out Stanton -- one of four on the night for Stanton -- and the Yankees would get just one run in the inning. They stranded 10 runners in the game.

"We just couldn't get that backbreaking hit that allowed us to have that big inning," Yankees skipper Aaron Boone said.

The takeaway from this game: The Boston bullpen labored to get those final 11 outs. With Steven Wright unavailable to pitch the eighth after coming up with a sore knee before the game, Cora was forced to try to get a few extra outs from Workman in the seventh (that didn't work) and then use Porcello.

That all means Game 2 starter David Price might be expected to pitch a little deeper than Sale did Friday. And we all know Price's postseason history, which hasn't exactly inspired a modern-day Franklin Pierce Adams to pen a poem in tribute.

Price has started nine postseason games in his career; his team has lost all nine. He has had some good starts, some bad ones, some bad luck and a couple of blow-up innings. The end result has been the same: He didn't win, his team didn't win. As a starter, he's 0-8 with a 5.74 ERA and 11 home runs allowed in 58 innings.

"I just don't have an answer for you guys," he said. "I've been asked that quite a while now. I can't really put my finger on it. That was my generic answer."

Some of Price's postseason numbers are better than the results otherwise indicate. Just counting the games he has started, he has 52 strikeouts and 10 walks in 58 innings. That's fine. He has always pounded the strike zone. He has allowed a .262/.300/.450 batting line. It's that slugging percentage that's a little high. So I watched all postseason 11 home runs he has allowed. Working backward:

The pitch to Chisenhall was a fastball in, but not at the knees like the catcher wanted. Chisenhall yanked it down the line, clearing the fence by a few inches. The home runs to Moustakas and Zobrist came in the same game in the first two innings. The pitch to Moustakas was terrible -- a lefty-on-lefty changeup left over the middle of the plate. On the Zobrist pitch, the catcher set up outside and Price left it low and in. Odor turned on an inside cutter, another one that barely cleared the wall.

That first Cruz home run came after Adam Jones had reached on a little dinky single; catcher Alex Avila had just left the game after getting injured on the bases. It was a pretty good pitch off the plate that Cruz muscled down the right-field line, just 342 feet. Those were the only runs in a 2-1 loss.

The two home runs from Ortiz came in the same game at Fenway, in the first inning and eighth inning, one blast off a low cutter into the bullpen and then an inside fastball on the hands that Ortiz wrapped around the foul pole. And so on. The second Cruz home run came on a green light and he crushed a middle-middle fastball 461 feet to center field.

Still, some cheap home runs in there. It happens. It has happened to Price more often than is probably fair. Cora even referenced a game against the Royals while he was with the Blue Jays when a popup was followed by a few seeing-eye singles to knock Price from the game.

Cora said he didn't have any special message or meeting with Price. "I'm treating the guys the same way I treat them in the regular season. That's a guy I trust," Cora said. He referenced Price's second-half performance, how he turned things around after a brutal five-homer game against the Yankees on July 1. Price has a 2.25 ERA over his final 11 starts.

After Game 1, Sale said there are no limits on his usage. "They want me throw 150 [pitches], I'm throwing 150. ... We are fully prepped for everything thrown our way."

Price won't throw 150 pitches on Saturday. But given the uncertainty in the Boston bullpen, he might need to throw more than the 93 that Sale threw on Friday.