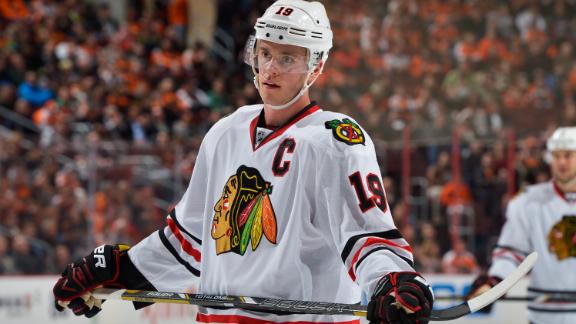 CHICAGO -- Blackhawks captain Jonathan Toews will sit out the team's six remaining regular-season games due to an upper-body injury but will return for the playoffs, coach Joel Quenneville said Wednesday.

"He's day to day," Quenneville said after practice Wednesday. "He's going to be 100 percent for the playoffs. We're not going to play him for the rest of these six games, so he'll be ready to go."

Quenneville said the Blackhawks were being cautious with Toews leading into the playoffs.

"We're going to be smart and make sure he's going to be 100 percent, and he will be 100 percent for the playoffs," Quenneville said. "Could he play [if tomorrow was a playoff game]? Knowing Jonny Toews, there's no chance he'd be out of the game."

Toews suffered the injury when he was hit into the boards by the Pittsburgh Penguins' Brooks Orpik during the second period Sunday. Toews was holding his left arm as he left the ice and did not return.

In total, Toews has been out of the Blackhawks' lineup in 51 regular-season games during seven seasons. The Blackhawks are 22-21-8 in those games.

Quenneville said forward Andrew Shaw likely would replace Toews at center on the top line. The Blackhawks could also use Joakim Nordstrom in the role. He was recalled from the Rockford IceHogs of the AHL on Wednesday.

"We're certainly going to find out [about our depth at center]," Quenneville said. "It might be an opportunity for some guys stepping up. I liked his [Nordstrom] practice today. He'll get an opportunity in the middle. Play with some pace. We'll evaluate him as well."

The Blackhawks are already without forward Patrick Kane until the playoffs due to a lower-body injury. He has missed the past six games and was placed on long-term injured reserve March 21. Kane has 29 goals and 40 assists in 69 games.

Quenneville said Kane was expected to be on the ice in the next few days.

The Blackhawks have been without Kane and Toews at the same time in just one game the past seven seasons. They both were healthy scratches in the final regular-season game of the 2012-13 season because the Blackhawks already had clinched the Presidents' Trophy.

Forward Kris Versteeg knows it won't be easy to play without Kane and Toews, but he thinks the team can get by until they return.

"Obviously when you lose a centerman with [Toews'] capabilities, it's tough to replace," Versteeg said. "We just have to find ways to get wins without him and [Kane] right now. Dig deep. You see other teams in the league, they lose guys and they find ways to do it, so we're going to have to do the same."

The Blackhawks, the defending Stanley Cup champion, are 42-19-15 and in third place in the Central Division. They are on a three-game losing streak and are 4-5-1 in their past 10 games.

Quenneville made it clear the Blackhawks weren't throwing in the towel to the Colorado Avalanche for second place in the Central Division. The Blackhawks trail the Avalanche by three points.

"We have to find a way to get ourselves back in that little race with Colorado," Quenneville said. "We lost some ground there over the past couple of games. I think with everybody playing the right way, defensively being sharp and everybody playing, we'll keep bringing that pace, bringing that pace. It's been sporadic in the last three games. I didn't mind our last game, but that's basically how we want to play -- the second period through stretches of the third for the whole 60."

Also, Blackhawks forward Bryan Bickell is expected to return to the lineup against the Minnesota Wild on Thursday after missing six games with an upper-body injury, according to Quenneville. Bickell has 10 goals, two assists and a minus-seven rating in 53 games this season.