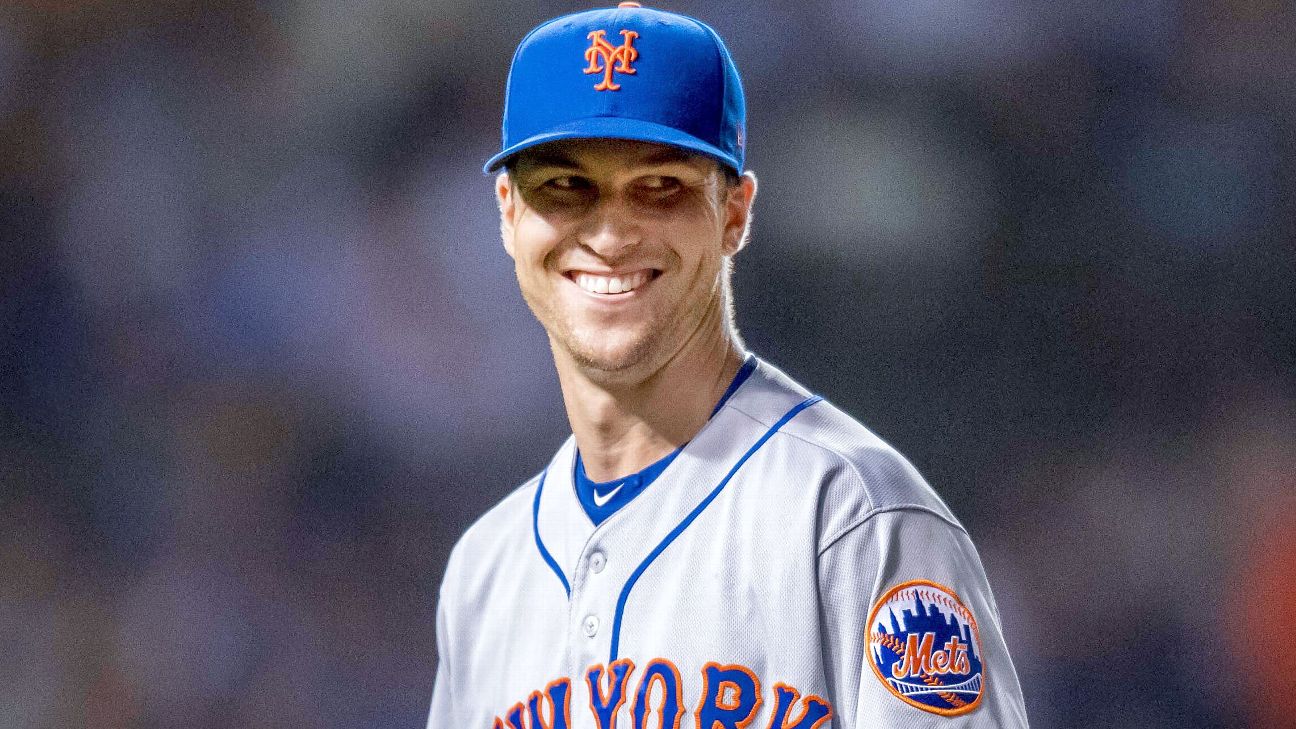 On April 10, in his third start of 2018, Jacob deGrom allowed four runs in six innings in a no-decision against the Marlins. All four runs came in the fifth inning. With one out, Yadiel Rivera hit a chopper over third base and the ball popped out of Todd Frazier 's glove for an infield single. Derek Dietrich hit the next pitch for a ground ball single into right field. Miguel Rojas followed with a grounder in the hole; Frazier dove, but it glanced off his glove for another infield single. After a sacrifice fly, Justin Bour lined a fastball up and away to the opposite field, the ball just clearing the fence in left field for a two-run homer.

The entire sequence lasted seven pitches and consisted of one hard-hit ball.

It was deGrom's worst outing of the season.

The 30-year-old right-hander for the New York Mets would make 29 more starts and allow three runs or fewer in each of them. He ended the season with a stretch of 24 starts in a row where he pitched at least six innings and allowed three runs or fewer, an all-time record. Essentially, the man didn't have a bad start all season, so even though he finished with just 10 wins, it's no surprise that deGrom is your National League Cy Young winner.

He finished the season 10-9 with a 1.70 ERA, the fewest wins ever for a Cy Young-winning starting pitcher -- Fernando Valenzuela had 13 for the Dodgers in the 1981 strike-shortened season and Felix Hernandez won 13 for the Mariners in 2010. Fifteen years ago, maybe deGrom doesn't win, but voters have learned not to over-emphasize wins, such as they did in 2005, when Bartolo Colon (21-8, 3.48 ERA, 157 strikeouts) beat out Johan Santana (16-7, 2.87 ERA, 238 strikeouts) for American League Cy Young honors.

Over in the American League, Tampa Bay Rays lefty Blake Snell had a breakout season, finishing 21-5 with a 1.89 ERA and .178 average. He became just the fourth AL starter in the designated hitter era to finish with a sub-2.00 ERA (joining Martinez, Ron Guidry and Roger Clemens), and over his 11 outings after a short disabled-list stint for shoulder fatigue, he went 9-0 -- winning nine starts in a row -- with a 1.17 ERA. Snell starts with a fastball that averaged 95.8 mph and mixes in a wipeout curveball and wipeout slider (plus a changeup). Against the two breaking balls, batters hit .115 and fanned 58 percent of the time in plate appearances ending with those pitches. Good luck.

The big knock against Snell as a Cy Young winner: He pitched just 180 innings, the fewest for a Cy Young-winning starter in a non-strike season. Only Clayton Kershaw, when he pitched 198 innings in 2014, had won as a starter while throwing fewer than 200 innings. Runner-up Justin Verlander pitched 33 more innings, but the gap in performance remained large enough that Snell feels like the right choice. It would have been a tougher debate if Verlander had thrown even 230 innings, or if we were comparing Chris Sale -- who threw 155 innings and didn't qualify for the ERA title -- to Verlander.

Maybe the most interesting aspect of this year's votes is that while deGrom and Snell had easy victories in the voting, they weren't unanimous best pitchers via the advanced metrics. In the NL, deGrom had a comfortable margin over Max Scherzer in FanGraphs WAR (8.8 to 7.2), but Baseball-Reference WAR tells a different story:

In the AL, Snell led Sale and Verlander in Baseball-Reference WAR, but somehow ranked just eighth among in FanGraphs WAR:

For those who question WAR, the disparity in value for Nola and Snell is fodder for their arguments, even if they are relatively unique cases. So what's going on?

Baseball-Reference loves Nola, to a large degree, because it's giving him a huge adjustment for the Phillies' bad defense -- 0.64 runs per nine innings. B-R estimates that the Phillies' defense cost Nola about 15 runs, which would drop his runs allowed from 57 to 42. Nola pitched in a neutral park while deGrom pitched in a pitchers' park, so that also increases the gap between the two. Maybe the Phillies' defense did hurt Nola; on the other hand, his .254 BABIP tied for the fourth-lowest among starters, so balls in play were turned into outs a large percentage of the time.

FanGraphs, meanwhile, sees that deGrom had a higher strikeout rate and lower walk and home run rates and deemed that he had the much superior season. Their calculations do not factor in Nola's hit rate or left-on-base rate or the fact that allowed fewer runs than you would expect because he held batters to a .129 average with runners in scoring position.

For similar reasons, FanGraphs doesn't see Snell as valuable as other AL starters. Snell had an even lower BABIP than Nola at .242. His walk rate was a little high, nearly twice that of Verlander's. His strand rate of 88 percent was the highest in the majors -- in fact, the highest, via FanGraphs, since John Candelaria in 1977.

As good as Nola was with runners in scoring position, Snell was even better: Batters hit .088 against him (10-for-114). Baseball-Reference has play-by-play data back to 1954, and that's the lowest figure on record for at least 100 at-bats with RISP (Nola's .129 mark is tied for seventh-lowest, with those in between all relievers).

Certainly, Snell is unlikely to achieve that number again in 2019. But he did it in 2018 and that's why he's the Cy Young winner. Maybe Nola really did have a historic season. It's deGrom, however, who walks away with the hardware.