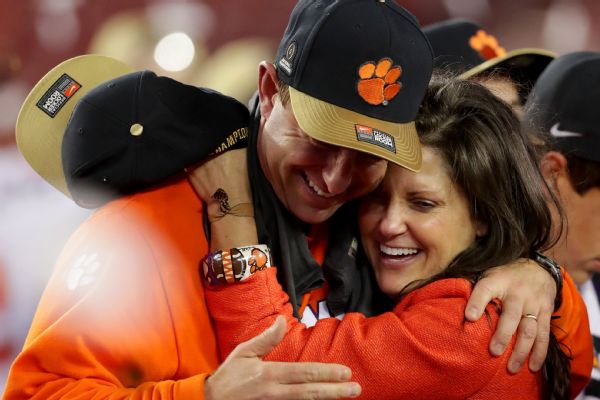 CLEMSON, S.C. -- Dabo Swinney took the stage in front of a packed house of Clemsonfans to announce each of the Tigers' 2017 signees, but he opened with a frank admission that he'd broken a few rules to nab his favorite recruit.

"I definitely spent a lot of nights at his house, and I've paid his mom a lot of money," Swinney joked before introducing his son, Will Swinney, as a member of the 2017 class.

Will Swinney, a receiver at Daniel High in Clemson, officially signed his letter of intent as a walk-on at Clemson, which added 15 scholarship signees Wednesday.

But if Will wasn't the biggest star of the class, he provided the highlight of the day for his dad.

"I've never recruited anyone who has worked harder to achieve his dreams than my son," Dabo Swinney said. "He's special. I just couldn't be more proud. I couldn't wait to get up this morning and introduce him."

It was hardly the first time Will had attended a signing day celebration, he noted. But this one was a little different.

"I've been a part of signing days and seeing my dad recruit," Will Swinney said, "and for this day to come for me, it's just a blessing."

Swinney's wife, Kathleen, said the she and Dabo had stayed up Tuesday night looking through baby pictures of Will in advance of Wednesday's official introduction, and the moment proved to be a little bittersweet.

"It's just surreal for Dabo and myself," Kathleen said. "We can't believe he's graduating, graduating with honors, and he's just worked so hard and got into Clemson on his own. We're beyond thrilled."

While Dabo has coached his son in basketball and baseball over the years, he said he'd largely avoided meddling in Will's football career -- until now, that is.

"He had offers to go play other places, but this has been his dream to be a Clemson Tiger," Dabo Swinney said. "Now, it gets fun."

Coming off their first national title since 1981, the Tigers signed a small class Wednesday. However, there is plenty of quality in that group, including five-star quarterbackHunter Johnson, who will get a chance to be Deshaun Watson's replacement.

Despite the relatively small numbers, coach Dabo Swinney is likely to land a class that ranks in the mid-teens nationally.

The Tigers will need some immediate help at receiver after the early NFL departures of Mike Williams and Artvais Scott. The additions of five-starTee Higgins and four-star Amari Rodgers, both from Tennessee, could help fill the void. 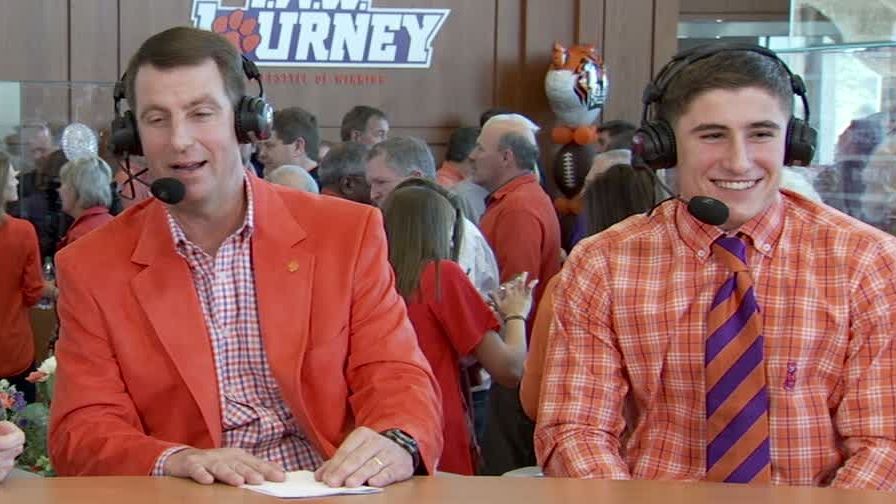