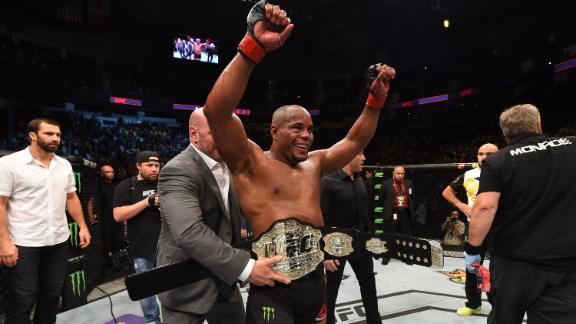 HOUSTON -- UFC light heavyweight champion Daniel Cormier has unfinished business with his old rival Jon Jones, and there will eventually be a time and place to settle it.

In the meantime, Cormier has proven beyond all doubt his name belongs in the record books -- regardless of what happens with Jones.

Cormier (17-1) successfully defended his title for the first time at UFC 192 on Saturday inside Toyota Center, defeating Alexander Gustafsson via split decision.

It was by far the most difficult win of Cormier's six-year professional career. He was knocked down by a Gustafsson knee and left hook in the third round and suffered a deep cut under his right eye. The pace alone was incredibly taxing. According to Fightmetric, Cormier threw 364 total strikes and landed 219. Gustafsson landed 130 of an attempted 264.

"I'm going away from a promo tonight and I'm just going to be myself," Cormier said. "Thank you, Alexander Gustafsson. You made me a better man and a better fighter tonight. I will forever be indebted to you for your performance.

"I talked a lot. It's my job to sell fights, but I expected [a tough fight]. I expected that Gustafsson -- that warrior, that guy I left part of myself in the Octagon against tonight."

The back-and-forth nature of the fight lifted, at least for 25 minutes, the shadow that's been cast over the division by Jones. The eight-time defending champion was stripped of his title by the UFC in April due to disciplinary reasons. He was in the headlines earlier this week for pleading guilty to a felony charge in a New Mexico court of leaving the scene of an accident. Jones avoided jail time and is expected to return to the Octagon in 2016.

Cormier, who lost a unanimous decision to Jones in January, has claimed the throne in his absence. He won the 205-pound title by submitting Anthony Johnson at UFC 187 in May.

Within the opening minute of his first title defense, the former U.S. Olympic wrestler had shot a single leg takedown on Gustafsson, lifted him into the air and somersaulted him forward onto the canvas. That was, however, the only takedown Cormier would secure in the fight, as Gustafsson showcased phenomenal takedown defense the rest of the way.

In the second round, Gustafsson cut Cormier under the right eye with a left hook. He also scored a surprise takedown of his own, but Cormier jumped immediately to his feet. From the opening bell, it was clear Cormier was committed to pressure, even if it occasionally meant forfeiting technique. He repeatedly dirty boxed Gustafsson in the clinch, grabbing behind the Swede's neck with his left hand and firing uppercuts with the right.

"That was very effective," Cormier said. "Every time I hit him with it, I felt him stop. He stopped punching. He stopped moving. When you can make a striker try to wrestle you, you know you're doing a good job."

As momentum started to swing strongly in Cormier's favor, Gustafsson responded in the third round with the knockdown. Cormier recovered quickly from the shot, but it was a significant moment in a fight he was clearly winning. Gustafsson built on the knockdown by putting together arguably his best round in the fourth. He kept Cormier at bay with the jab and appeared to stun him with a counter right hand in the center of the cage.

Eventually, Cormier's pace won out. He clocked Gustafsson with a big right hand to start the fifth. With a cut on the bridge of his nose and his eyes badly swollen, Gustafsson fell into a pattern of turning his back and running several steps from Cormier at times to get away from the pressure, which drew some boos from the crowd of 14,626.

Jones posted a video to Instagram shortly after the fight concluded. Appearing shirtless, he smiled and said, "I think I miss it. I don't know." The video was later removed.

UFC director of communications Dave Sholler said the promotion should have news on Jones' potential return soon. He is currently under indefinite suspension by the UFC.

"We're in the process, through our law firm in Las Vegas, of reviewing the terms of that plea agreement and anticipate having more news this week," Sholler said. "I saw Jones was active on Instagram after the fight, so it seems like he's interested, but tonight is about Cormier and Gustafsson."

On the subject of Jones, Cormier simply said, "When he gets cleared to fight, we'll fight."