D.C. Dilemma: First-place Capitals not themselves in loss to Devils 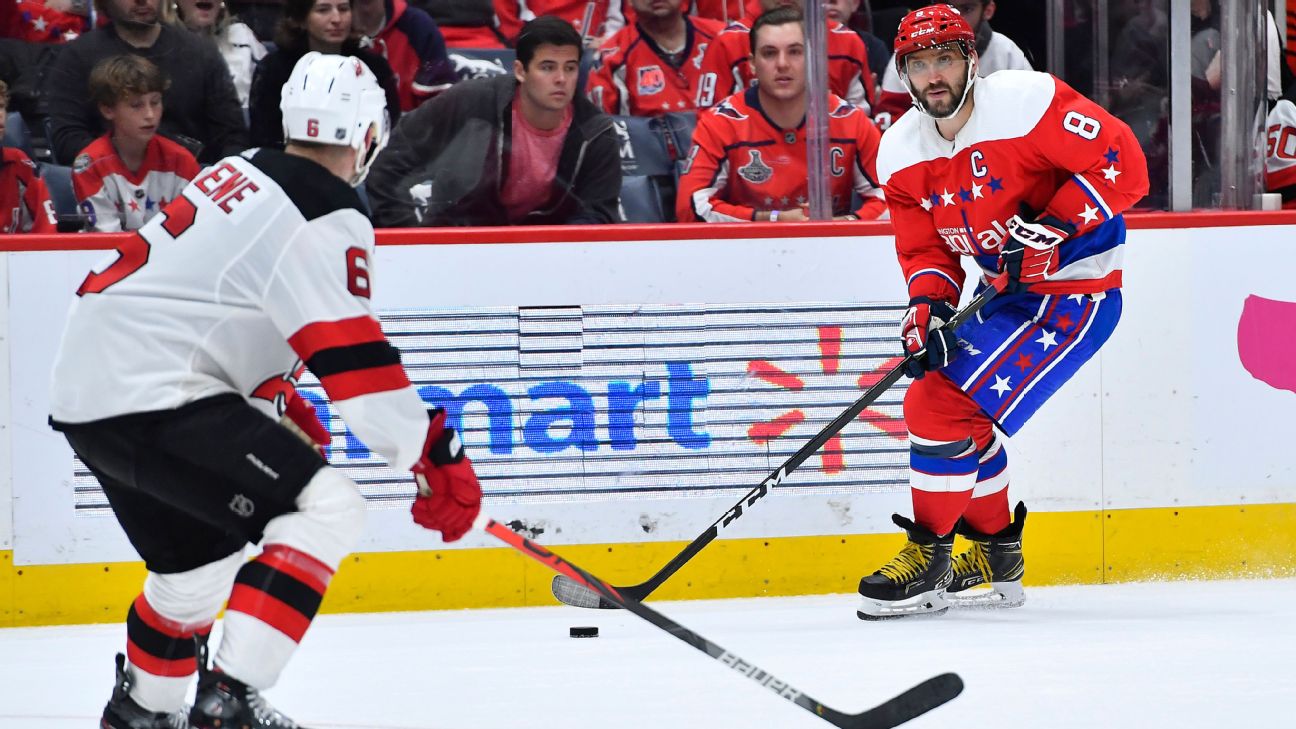 WASHINGTON -- Braden Holtby allowed four goals on just 21 shots, and the Washington Capitals, who entered the night leading the NHL in points, authored an uncharacteristic 5-1 loss to the last-place New Jersey Devils on Saturday.

Washington allowed New Jersey to race out to a 3-0 lead in losing back-to-back games in regulation for the second time this season. The Capitals have dropped four of seven and -- combined with Boston's 3-2 overtime win over theNew York Islanders-- now find themselves tied with the Bruins atop the league standings with 65 points.

"We're going through a time in the season right now when we're not executing and we're not outworking the opponent," Washington coach Todd Reirden said. "That's not our identity."

Defensive-zone miscues continue to haunt the Capitals, who watched Nico Hischier score twice for the short-handed Devils, still without this season's No. 1 overall pick,Jack Hughes (upper body). Hischier, the No. 1 overall pick in 2017 by New Jersey who has flourished since the Devils traded Taylor Hall last month, has six goals since Dec. 27 and four in 2020.

Blake Coleman scored a short-handed goal for the Devils, and backup goaltender Louis Domingue made 33 saves en route to the win.

"I felt great from the start, and I thought we played really hard in front of me,'' Domingue said. "Teams don't like the checking game, so if we can get that on our side, we're going to be tough to play against.''

Despite Jakub Vrana's goal in his first game since a promotion to the first unit, the Capitals' power-play struggles continued. They allowed a short-handed goal for the second consecutive game and went 1-for-5 on the power play, including a botched 5-on-3 chance in the third period. Capitals captain Alex Ovechkin had 5:07 of power-play time on the ice but finished a minus-2 overall on 21 shifts.

"Obviously, you can't give up a short-handed goal and a breakaway right after it,'' Reirden said. "It's definitely a work in progress. The execution has got to improve all over the ice for us, in all situations, if we want to be the type of team we expect to be."

The Devils, meanwhile, rebounded from a three-game losing streak and a 6-3 loss to the Rangers in New York on Thursday, a game in which Domingue had to replace starter Mackenzie Blackwood.

"You talk about a team playing hard tonight in a tough building, against a tough opponent, and special teams came through," Domingue said. "That was a key tonight."

The Devils have secured points in six of the past eight games and have posted surprising wins during that stretch over three teams comfortably in the Eastern Conference playoff picture: the Capitals, the Bruins and the Islanders.