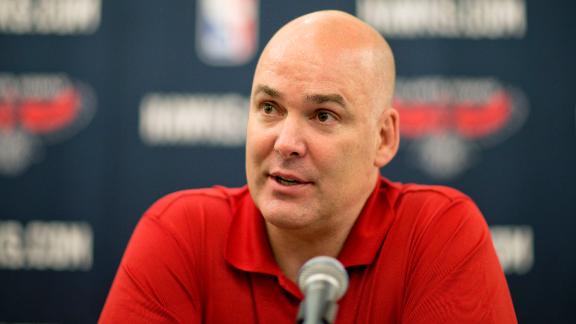 The publication of a letter from Hawks minority owner Michael Gearon Jr. to controlling owner Bruce Levenson calling for Ferry's firing because of the comments created a firestorm around Deng. While reviewing a scouting report as he was discussing the team's free-agent options with Hawks owners, Ferry said that Deng "has a little African in him. Not in a bad way, but he's like a guy who would have a nice store out front but sell you counterfeit stuff out of the back." Ferry also referred to his report saying that Deng was "two-faced."

Deng took those words and turned them back on the Hawks and Ferry in his statement without using either name.

The entirety of Deng's statement reads as follows:

" 'HE HAS A LITTLE AFRICAN IN HIM'

"These words were recently used to describe me. It would ordinarily make any African parent proud to hear their child recognized for their heritage.

"I'm proud to say I actually have a lot of African in me, not just 'a little.' For my entire life, my identity has been a source of pride and strength. Among my family and friends, in my country of South Sudan and across the broader continent of Africa, I can think of no greater privilege than to do what I love for a living while also representing my heritage on the highest stage. Unfortunately, the comment about my heritage was not made with the same respect and appreciation.

"Concerning my free agency, the focus should purely have been on my professionalism and my ability as an athlete. Every person should have the right to be treated with respect and evaluated as an individual, rather than be reduced to a stereotype. I am saddened and disappointed that this way of thinking still exists today. I am even more disturbed that it was shared so freely in a business setting.

"However, there is comfort in knowing that there are people who aren't comfortable with it and have the courage to speak up. In the same way a generalization should not define a group of people, the attitude of a few should not define a whole organization or league.

"Ultimately, I'm thankful to be with an organization that appreciates me for who I am and has gone out of its way to make me feel welcome."

One of those individuals speaking up was Magic Johnson, who tweeted Tuesday calling for Ferry's resignation.

- Earvin Magic Johnson (@MagicJohnson) September 9, 2014Hawks CEO Steve Koonin said the team disciplined Ferry but he will remain the team's general manager. Koonin is running the Hawks while a buyer is found for Levenson's controlling shares after Levenson announced he was selling the team in the wake of an email released that he wrote which included some racially insensitive commentary on the team's fans.

Ferry called Deng and his agents over the weekend to personally apologize and released a statement on Tuesday.

"Those words do not reflect my views, or words that I would use to describe an individual and I certainly regret it," Ferry said. "I am committed to learning from this and deeply regret this situation. I fully understand we have work to do in order to help us create a better organization; one that our players and fans will be proud of, on and off the court, and that is where my focus is moving forward."

The Hawks were one of the teams that seemed to be a fit for Deng in free agency but talks never progressed over the summer. Deng ended up signing a two-year, $20 million deal with the Heat.