Derek Carr says he hopes Johnny Manziel gets another chance 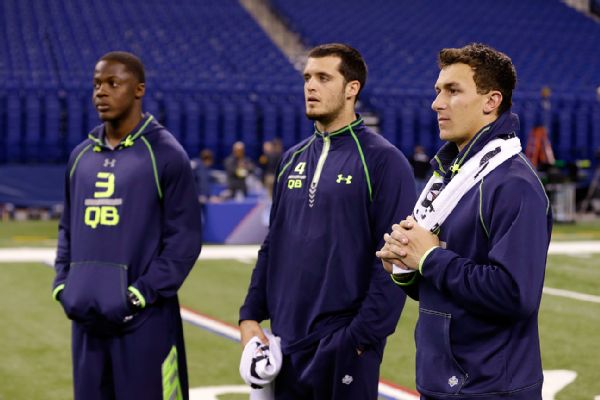 Oakland Raiders quarterback Derek Carr is in his third NFL season and playing for a 10-3 team after being picked in the second round of the 2014 draft at 36th overall.

Johnny Manziel is a free agent who hasn't signed with a team since the Cleveland Browns released him in March, and he served a four-game suspension this season for violating the NFL's substance abuse policy. He remains under review of the league's domestic violence policy, which could lead to a six-game suspension.

The former Texas A&M quarterback was drafted in the first round of the same draft, 22nd overall and 14 picks ahead of Carr.

Carr, however, expressed only sympathy for Manziel in a recent interview. He told The MMQB.com that he wants to help the former Texas A&M star and 2012 Heisman Trophy winner.

"You know, I spent a lot of time around him," Carr saidas part of an NBC "Football Night" feature. "He's such a good dude. I obviously wish him the best, you know ... I hope that ... hopefully one day he'll reach out. [I'd] be able to talk to him and be a friend to him."

When asked if he'd like the chance to help Manziel, Carr said, "Absolutely."

"He's so talented, so I understand why he was drafted where he was," Carr said. "He could throw, could run, a dynamic athlete, dynamic player. Obviously, he just had a little trouble. He's still young, though, so hopefully he'll get another chance someday, and he'll be all right."

Later Monday, Manziel tweeted to Carr, who then responded that he'd be in touch: