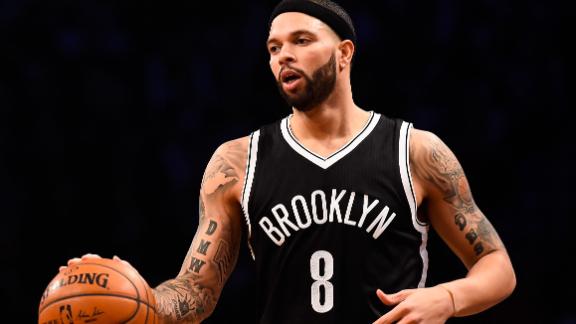 Former All-Star point guard Deron Williams is in talks with the Brooklyn Nets about securing his potential release this offseason to clear the way for Williams to sign with his hometown Dallas Mavericks, according to league sources.

Sources told ESPN.com that the Nets, whose well-chronicled hope is moving out both Williams and fellow former cornerstone Joe Johnson before the start of next season, have opened buyout talks with Williams on the remaining two years and $43.3 million of his contract.

A buyout, if Williams' representatives and the Nets can come to terms, would be Brooklyn's preference compared to outright waiving the 31-year-old. The Nets have been adamant since the end of the season that they do not want to simply release Williams via the stretch provision, even though it would allow them to pay out his remaining salary over the next five seasons and reduce their luxury-tax bill, as long as such a measure is executed before the Aug. 31 deadline.

But Brooklyn's attempts to trade Williams have gone nowhere, with what is a very limited trade market seemingly getting thinner. The Sacramento Kings pondered a trade for Williams last season, but it's believed the Kings are no longer interested after striking a one-year, $9.5 million deal in free agency with another former All-Star,Rajon Rondo.

Sources say the Mavericks, by contrast, are very motivated to sign Williams after being spurned in free agency by DeAndre Jordan, provided Williams can extricate himself from the Nets and get to the open market.

The Mavericks, sources said, are not pursuing a trade for Williams because of salary-cap space such a move would eat up.

The Mavs famously lost out to the Nets in a heated recruiting battle for the Dallas-area native in the summer of 2012, but Williams' stock as a Net has declined considerably since he inked that five-year, $99 million deal to stay with Brooklyn. Sources say there is strong mutual interest now, though, between Williams and the Mavericks to come together to try to help each other, provided he becomes a free agent. Dallas has a significant hole at point guard after its failed Rondo experiment, while sources say Williams is eager for a fresh start after four long seasons.

Although there have been steady rumblings in league circles in recent weeks that a return to the Utah Jazz is also a possibility for Williams, sources say Dallas has emerged as his preferred destination, in part because he could reunite with new Mavs guard Wesley Matthews, his former Jazz teammate.

Williams averaged just 13.3 points and 6.6 assists per game last season while shooting a career-worst 38.7 percent from the field. But the Nets have to explore every avenue they can to avoid paying luxury tax at the end of the coming season and thus dodge the dreaded "repeater tax."

The Nets have been a luxury-tax payer each of the past two seasons and will have to pay an extra dollar for every dollar spent beyond the league's new $84.7 million tax threshold for next season if they can't move out Williams and/or Johnson to get under.

As ESPN.com's Brian Windhorst reported earlier this month, Brooklyn and the Cleveland Cavaliershave discusseda Johnson trade to the Cavaliers for Brendan Haywood's fully non-guaranteed contract and veteran big man Anderson Varejao. But Cleveland has to date balked at the immense luxury-tax bill it would incur -- inching above the $100 million mark -- by adding Johnson to its stacked roster.