Domingo German latest rookie to contribute to Yankees' cause 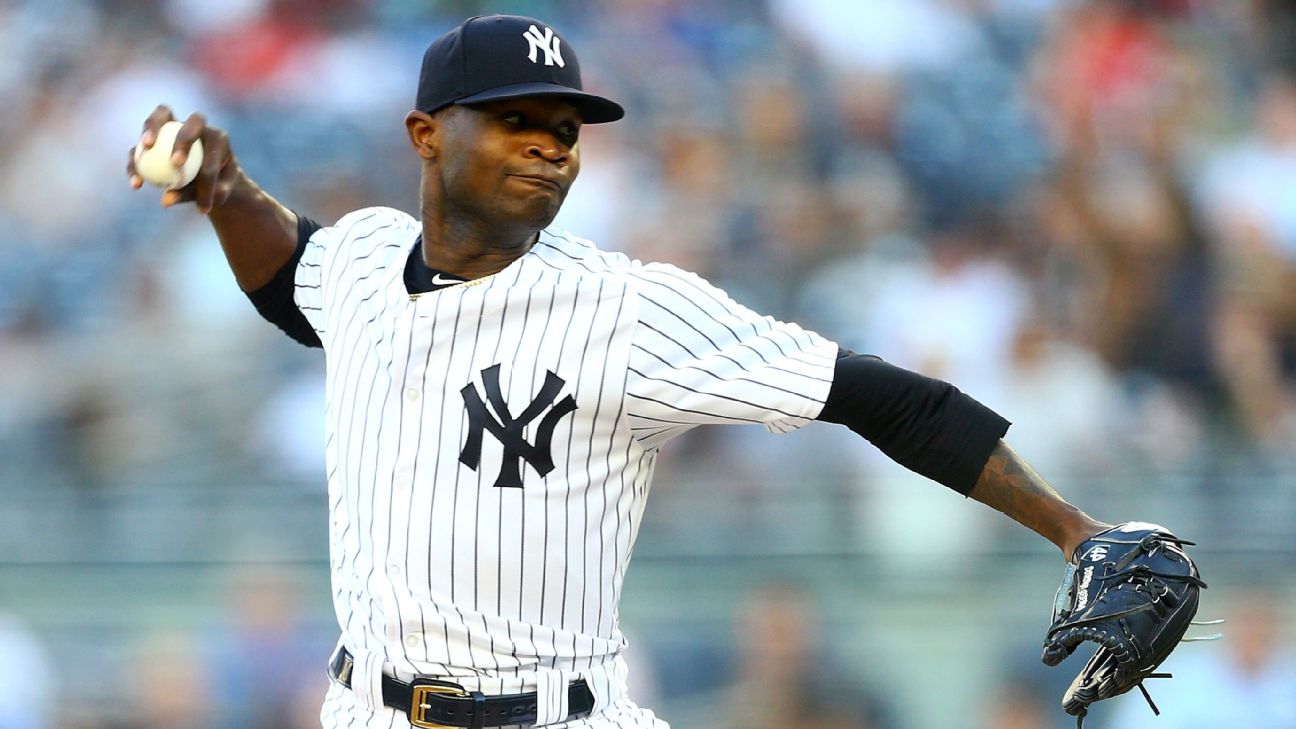 As German was settling back into his plush seat, Rothschild handed him a small box and offered a word of congratulations.

Upon thanking his coach for the gift, the 25-year-old starter glanced at the box, kissed it and placed it on a shelf inside his locker as a broad grin started to appear.

Why was he so happy? Because German had just been handed the game ball from his first major league win. It was about time.

"It's been a long battle for me," German said through an interpreter after a 4-3 victory over the Tampa Bay Rays. "To be able to win my first game in the big leagues, it means a lot. Hopefully I can relax a little more after getting the first one, and keep battling."

The grind has been real for German, who lost the first five games of his career in which he got a decision. Moved into the Yankees' rotation a little more than a month ago, German had an 0-3 record this year as a starter, including three no-decisions in games the Yankees went on to win.

German's victory Thursday improved his overall record to 1-4 (he has a loss as a reliever). It also gave the Yankees a glimmer of hope for their banged-up rotation that has been looking to put together a run of solid starts the past several weeks.

Ace Luis Severino has certainly done his part, and with seven wins, Masahiro Tanaka has pitched well enough to help too. CC Sabathia has had moments of absolute brilliance, as has Sonny Gray. But they also have had their share of off nights.

Then there are the injuries. Tanaka could be out for multiple starts with two strained hamstrings, and last week Jordan Montgomery -- whom German originally replaced in the rotation in early May -- underwent season-ending Tommy John surgery.

Between the inconsistency and the injuries, it seems likely the Yankees will be making a move before the trade deadline to add depth to their rotation.

"They talk about us looking for starters and all that, but the reason we've been able to string wins together a lot of different times has been the starting rotation," Yankees manager Aaron Boone said. "It hasn't always been seven, eight innings obviously, but for the most part, they've strung together and given us a chance to win most every night.

"They're a big reason why, and Domingo's a big part of that, [of] why we're in a good position here."

German's past two starts have been among his best. Although both outings included some early struggles, he rallied across the latter innings.

Last Saturday in a Yankees win over the New York Mets at Citi Field, German struck out nine in a six-inning outing. All nine strikeouts came in his final five frames and after a pair of first-inning Mets homers put the Yankees in an early 3-0 hole.

During Thursday's win, German was down after the first pitch as he allowed Matt Duffy to hit a leadoff homer. But he settled down again, striking out a career-high 10 across six innings.

"We've come to see that with him. A little bit of adversity in the course of the game hasn't really affected him," Boone said. "He does a good job of regrouping."

German credits his pitch-by-pitch focus with allowing him to get back on track.

"Even if they go ahead, don't think about that, put that away," German said. "Just focus on executing one pitch at a time. I know we say that a lot, but that's really it: executing pitches.

"For me it's just to try to hold the game, execute pitches, don't put your head down, keep your focus."

German induced 26 swing-and-misses from Rays batters, with half of them coming via his curveball. That's the second-most swing-and-misses a Yankees pitcher has recorded in the past five seasons. Tanaka had 27 in two games last year.

The 26 swing-and-misses also tied for fourth-most in a game this season. Only James Paxton (31), Max Scherzer (29) and Jacob deGrom (27) have had more.

"He's matured every start," Yankees second baseman Gleyber Torres said of German. "Every day is better and better. He does the job. I think that's what's most important."

Torres played a key role in getting German his first win. After Aaron Hicks led off the Yankees fifth with a solo homer to close the deficit to 3-1, Torres came up with runners at first and second and a chance to give his team the lead.

He did just that, unloading on a 96.2 mph full-count fastball from Rays starter Blake Snell. The left-hander had been dominating the Yankees to that point, but he gave Torres a pitch that he could handle. The towering homer landed in the left-field seats, 393 feet away, giving the Yankees a 4-3 lead they would hold on to the rest of the night.

With German following the lead of Torres and fellow young slugger Miguel Andujar, the Yankees are getting a lot of production from rookies. All of the young talent has veterans such as reliever Dellin Betances feeling excited about the future.

"They're producing at a high level right away. You're not used to seeing that as much," Betances said. "All the young guys that we have, they've been excelling. It's fun to watch. The fans are excited and you can kind of see this wave of young guys just helping this team out. And we'll be seeing them for a lot of years."