'Don't run from the fire. Run toward it': Inside Clint Frazier's long, rockin' road to recovery 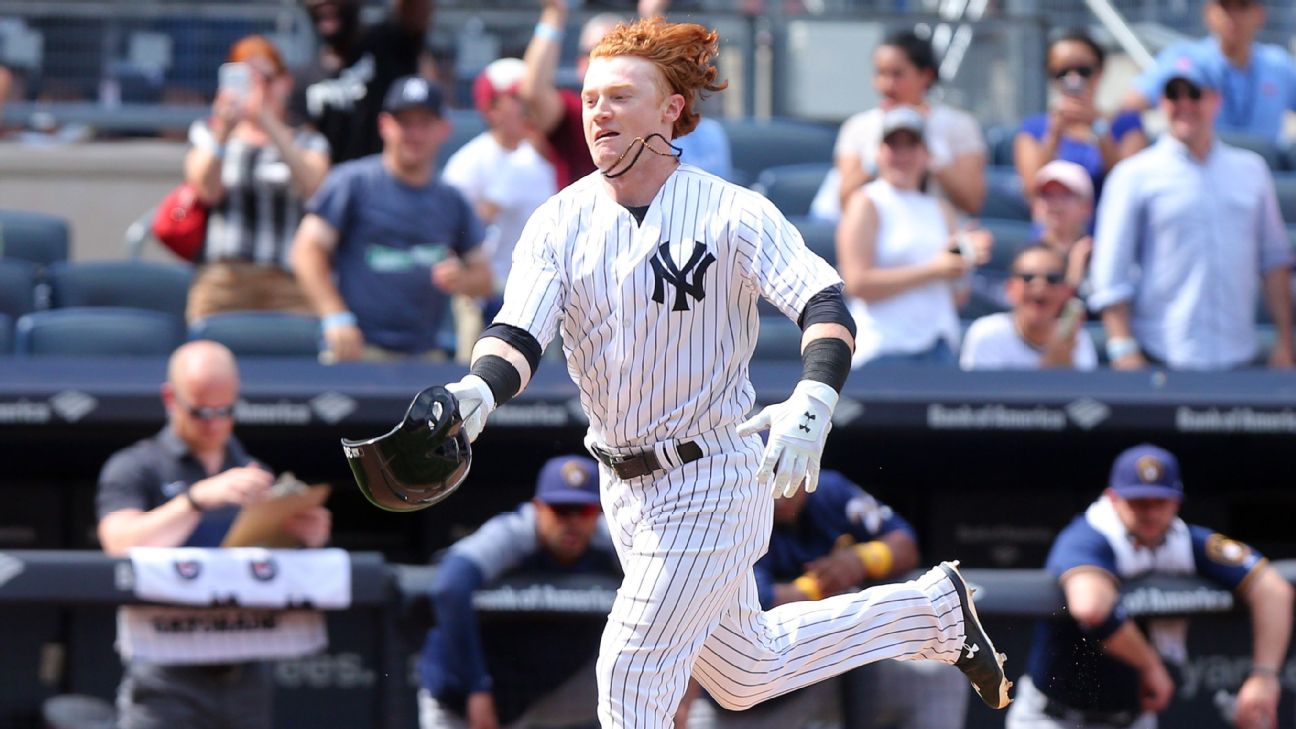 TheNew York Yankees outfielder has been a regular this offseason at concert venues -- exactly where a player coming off a nearly yearlong bout with a serious concussion ought to be, right?

In the middle of September, after the Yankees shut him down because of concussion symptoms linked to an injury from February, Frazier was prescribed just this kind of shock to his frazzled system.

He thinks that advice -- to go to concerts, bars, malls, anywhere with a lot of people, noise and bright lights -- has made him healthier and will have a profound effect on his upcoming season.

"It's kind of given me that extra little push to go through things, no matter how bad it feels," Frazier told ESPN at his suburban Atlanta home earlier this offseason. "It's been a tough road. But right now, I'm happy that I can say that it feels like it's coming to an end."

Frazier's treatments started shortly after he hit his head on an outfield wall in the Yankees' second spring training game last year. He was later diagnosed with a vestibular concussion. Such concussions can affect spatial recognition and balance. Dizziness, changes in mood and sensitivity to light and noise can also be symptoms.

At the onset, doctors told Frazier to embrace the dark and quiet. Sleep, sleep and more sleep were among his best remedies, they thought.

In September, he was given new instructions.

"We were told to keep moving," Frazier's girlfriend, Faith Jewkes, said. "Fight through the symptoms that you're feeling.

"He'd still feel these symptoms. He'd still feel like he's hungover, which, whenever we're hungover, all we want to do is sit down and close our eyes. But now we're expected to keep him going and turn that up a few notches."

That meant getting the 24-year-old out of his house and around as much activity as possible. He was pushed to spend time with friends in loud places -- even if his head was throbbing and he'd rather be under his covers with the lights off.

In the words of Dr. Micky Collins: "Don't run from the fire. Run toward it."

Collins is the director of the University of Pittsburgh Medical Center's sports medicine concussion program. Since its inception in 2000, UPMC has been at the forefront of sports concussion research, treatment and rehabilitation. Collins and Frazier have been working together the past five months.

"The way Dr. Collins has described things to me, I need to stress my vestibular system," Frazier said. "So go out and be active. Do things that will cause me to get flared up because that's how you retrain the system. The more active I am, the better I feel. The less active I am, the more the symptoms kind of take over my day."

Coupled with good eating habits, regular rest, constant training and conditioning, a refined mental approach and, quite simply, time, Collins' suggestions appear to have paid off. Frazier has seen vast improvements in recent months after struggling through the "scary" early days of the ordeal.

Just how scary was it?

"You don't feel like you're in your body. You feel like you're watching yourself or you're kind of on autopilot going place to place, and then sometimes you wonder, like: 'How did I get here?'" Frazier said. "Like, it's just one of these things where you feel distant from reality.

"Sometimes, if I'm not physically walking around, and I'm in the car moving, my brain was having a hard time registering. Like, my legs aren't moving, but my body is. So how is this happening? That's how I would get nauseous, or my head would flare up, or [I'd have] vision problems."

"I noticed he would be in conversations where we'd be talking, and then in the middle of them, he'd, like, doze off ... like forget what we were talking about," Milligan said. "He'd start talking and then be like, 'What are we talking about?'"

"I could tell that even between Halloween and Thanksgiving, there was an uptick, and things were getting better," said longtime friend and current housemate Austin May. "And then from Thanksgiving to Christmas, things also got better."

Certainly, there's something in Frazier's testing that doctors have liked, too. He was recently cleared to participate in spring training. He heads into Yankees camp much the way he did this time last year: with a chance to earn the starting left field job. Doing so would mean dethroning longest-tenured YankeeBrett Gardner, who was re-signed to a one-year, $7.5 million deal in October.

May should know. Since Frazier's marching orders from Collins, everything in their home has turned into a competition. There's a badminton court in the backyard and pingpong tables in the basement. From noon to 11 p.m. on Sundays in the fall, his closest friends argue about their respective fantasy football rosters. There are other random, less nuanced games around the house in which the points don't matter -- only winning does. In those, Frazier is practically undefeated, May said.

"I missed competing," Frazier said. "Whenever I would have a goal, it would give me a better day. I needed a goal in the day because I was so used [this past season] to waking up, feeling bad, going to the field and then coming back home and still feeling bad and wanting to do nothing but sleep.

"Being an athlete may have given me a concussion, but it's going to help me get out of it because of my competitive nature to try to not get beat by this mental game this injury is playing on me."

Almost as foundational to Frazier's identityas competition is music. He loves it. His Spotify playlists run the gamut of genres from pop to country to R&B to folk rock to trap to soul.

Drake. Migos. Travis Scott. Elton John. Jeremy Zucker. Ed Sheeran. 6LACK. The acts Frazier has seen since he was sidelined Sept. 18 are a who's who of the live music scene.

"That stadium's going to be loud," Frazier said. "I'm just trying to make sure that I put myself in situations to get used to it."

His friends believe it will be enough.

"What I think that's done for him is that he doesn't have to flip on a switch come spring training. There is no, 'Now he's back, but does he need to be safeguarded a little bit now that he's on the field?'" May said. "I don't think so. Because he's prepared, and he's not getting ready. He's staying ready.

Turning Frazier into an avid concertgoer had another function: It gave him a necessary distraction.

When he first started seeing Collins, Frazier pestered the doctor about things he'd read on the Internet. Could he get Parkinson's disease? Could he develop amnesia? Would the blurry vision remain the rest of his life?

Collins had to quell that anxiety. To do so, he implored Frazier to stop devouring everything he read. "Don't talk to anybody about your head unless it's me," the doctor cautioned. Then he told Frazier to get out with his friends and embrace loud, crowded spaces.

"If I'm sitting in that down moment, bathing in all those emotions, it makes it harder to get out of it," Frazier said. "Being around these guys has been a distraction more so to kind of get my mind off of it."

At sporadic points last summer, Jewkes wondered if better days would come. She sometimes saw doubt -- and insecurity about the future -- settle into her boyfriend's brain.

Jewkes, whose ordeal with Frazier convinced her to pursue a certification in sports psychology, felt obligated to keep both their spirits high. That meant taking each day as it came and figuring out how best to listen to Frazier and let him vent.

"It kind of was, like, a matter of having this toolbox and waking up that morning and figuring out, 'Do I need the hammer today? Do I need to use the wrench today?'" she said. "When I felt like we were maybe losing a little bit of the hope, I would need to step it up and be like, 'Look, I don't know why this is happening. I don't know exactly what it's going to look like for you getting back out on the field. But you're going to have a long career ahead of you, a successful one ahead of you. This is not it. This is not the end.'

"I would be lying if I said that this past year hasn't been difficult for me as well."

While helping Frazier deal with the mental gymnastics, Jewkes found others who have shared their battle.

Late in the summer, she stumbled across a blog post written by Kaitlyn Watts, San Francisco Giants outfielder Mac Williamson's girlfriend. In it, Watts outlined much of what she and Williamson endured in the months after he suffered a vestibular concussion. Last April, days after being called up from Triple-A, Williamson tripped over a bullpen mound and into a wall while chasing a foul ball.

Although she noted massive improvements in Williamson by the time her blog post was published last August, Watts wrote that at moments right after the injury, "he just was not himself."

"I remember reading that, and I was literally almost in tears," Jewkes said. "I was like, 'Oh, man. Someone else has gone through this.' But I hated that. I would never wish anybody to go through what [Frazier] did."

Frazier also has endured an offseason rife with speculation. He can't remember how many times he saw his name mentioned on social media by amateur GMs as possible trade bait for pitching.

Despite the online debate, Frazier was reassured multiple times by Yankees general manager Brian Cashman that he was safe.

"I haven't been traded yet, and it's because the front office and the team believes in me and can see me playing left, right or center -- whatever the situation is -- at any time," Frazier said. "I want to play for the Yankees. It's a special group up there. I'd be lying if I said I didn't want to be a part of it for a long time. I've been trying to win the same job in the same organization for the last couple of years."

Hanging in a massive frame on one of Frazier's living room walls is the gray road jersey he wore for his major league debut in Houston on July 1, 2017. He homered that day, bursting onto the scene for Bombers fans.

"I have earned my pinstripes, man. I've gone through enough in a short period of time, and I'm ready to give it a full season in a Yankees uniform -- not a [Triple-A] RailRiders uniform," Frazier said.

Those who know him best believe it'll happen.