Edwin Encarnacion back for Indians in Game 5 vs. Yankees 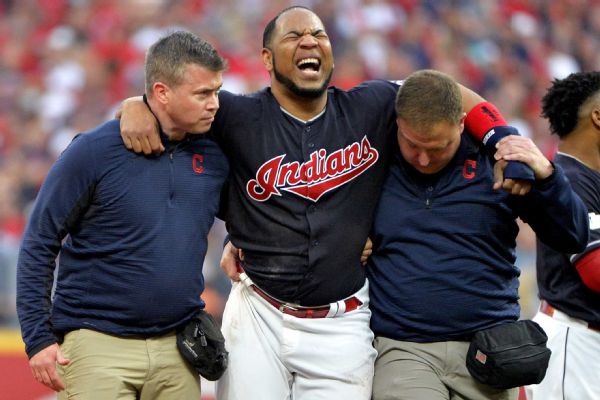 CLEVELAND -- The Indians' lineup is at full power for Game 5. Edwin Encarnacion is back.

After missing two games with a sprained right ankle, Cleveland's cleanup hitter is in the lineup Wednesday night as the defending AL champions meet the New York Yankees in a decisive finale of the AL Division Series.

Encarnacion sat out the Indians' two losses in New York after injuring his ankle while scrambling back to second base in the first inning of Game 2. But after testing it out by running and taking some swings in the batting cage on Tuesday, Encarnacion was cleared.

"Everybody was making a big deal out of him running," manager Terry Francona said. "And I understand that. But it's not like he's a basestealer. I wanted to see him hit. If he really can't hit, being out there in name doesn't help. I watched him in the cage and I really came away thinking, Damn, if I really wasn't looking for it I wouldn't have known,' which is really uplifting.

"I don't think he's going to be at top speed, by any means, but I don't see that getting in the way of his at-bats, either."

Encarnacion's power and presence changes Cleveland's lineup. He hit 38 homers and drove in 107 runs during his first regular season with Cleveland, and without him in the lineup the Indians lack a big, game-changing bat.

Francona made one other subtle switch with his lineup, batting Austin Jackson sixth and Jay Bruce seventh. Jackson is hitting .306 (11 for 36) in his career against Yankees starter CC Sabathia. Jackson provides protection for Carlos Santana, who has also done well against Sabathia, batting .306 (11 for 36) with one homer and three RBI.

"You try not to upset the apple cart," Francona said. "We've done things a certain way the whole year. But against CC. I just wanted to make sure that coming through the middle there that guys get pitched to, especially Santana. I thought that this was the best way to go about it.

Francona said the toughest decision with his lineup was starting catcher Roberto Perez over Yan Gomes.

"We just finally came to the conclusion that we were going to start Berto," Francona said. "And I don't know that there was a wrong choice. We just decided that we would start Berto and we told Gomer that he would probably have an influence in this game before it's over."
Report a correction or typo
Related topics:
sportsespncleveland indiansmlbjay bruceaustin jacksonnew york yankeesedwin encarnacioncarlos santanacc sabathiaroberto perezyan gomes
Copyright © 2022 ESPN Internet Ventures. All rights reserved.
TOP STORIES
Wounded NYPD officer fights for life; Accused gunman dies
School mask rule to continue after NY state judge overturns mandate
Sorrow, grief sweep vigil in NYC after 2 officers shot, 1 fatally
Cause of death revealed for 23-year-old woman found dead after date
"Perfect Crime" theater robbed of copper pipes in real life whodunit
AccuWeather: Breezy breaks, milder
What's behind the spike in violent crime across NYC?
Show More
Tips to stay safe on New York City subway platforms
Mayor Adams unveils NYC's 'Blueprint to end Gun Violence'
Rookie called a hero for quick action in deadly Harlem NYPD shooting
Video shows gunman wanted in shooting that injured baby in the NYC
7 On Your Side Investigates traces where illegal guns are bought
More TOP STORIES News