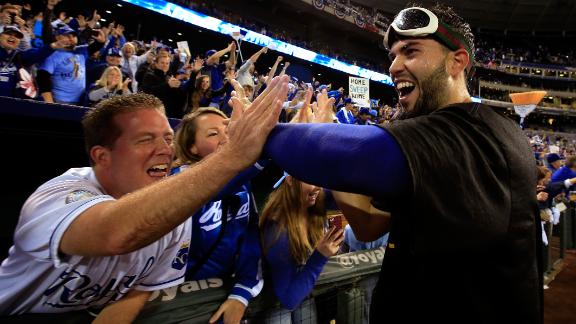 Royals first baseman Eric Hosmerhelped power Kansas City to the ALCS and then fueled the afterparty at McFadden's -- 10 minutes west from Kauffman Stadium on I-70 -- the best way he knew how.

Hosmer, according to local reports, arrived with several teammates after they finished off a sweep with their 8-3 win over the Angels and picked up the tab for everyone in attendance at the Irish bar in Kansas City's Power & Light District for the last hour of the night.

In video shot at McFadden's, Hosmer, Royals closerGreg Hollandand others can beseen shooting champagne at a capacity crowd.

The Royals return to the field for Game 1 of the ALCS on Friday at Baltimore.

Some of the revelers were drawn at least in part by a Hosmer invitation via Twitter:

Eric Hosmer Picks Up Bar Tab After Sweep
Mike Greenberg and Mike Golic talk about Royals 1B Eric Hosmer and teammates picking up a bar tab for an estimated 500 fans at a local bar following their ALDS win.