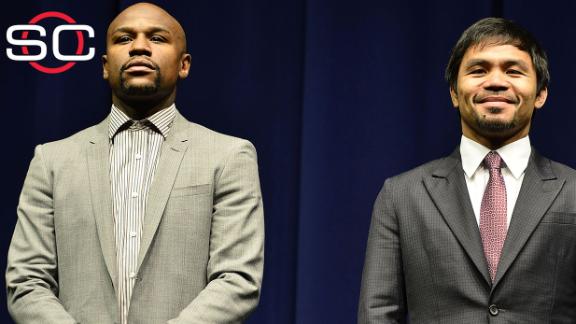 Eleven days before the fight between Floyd Mayweather and Manny Pacquiao, an actual contract for the bout to take place at the MGM Grand still has not been signed.


Top Rank promoter Bob Arum told ESPN.com on Tuesday that he wasn't signing the contract that he received a draft of on April 15 because it wasn't what he agreed to when the MGM, Mayweather Promotions and he signed the term sheet a couple months ago.


"We agreed that we would all be signatories on the final contract and then they sent us a draft of the agreement and it excluded us," said Arum, who promotes Pacquiao.

Not being a signatory to the contract means that Top Rank wouldn't have control of decisions during the fight, including in-arena production, video content and music.


"They don't want us to have any say," Arum said. "So whether they came up with the deal between Mayweather and MGM before or after our agreement, they've committed fraud either way. That's what we're enmeshed in."


Arum said later Tuesday night that, after asking for three weeks, he finally received the manifest, which carves out who gets seats where.


"It's one of the things I was most concerned about," said Arum, adding that he thinks it's possible the contract gets signed Tuesday night or Wednesday morning.


"The bottom line is that Bob isn't willing to live with the agreement signed a couple months ago, which doesn't allow him to be in control," Ellerbe said. "The only conspiracy, in my opinion, exists with him trying to conspire with his lawyers to change the terms of the agreement. I assure you that nothing underhanded is going on and the reference to this back alley stuff is ridiculous."


The only hint to the actual term sheet was posted on Manny Pacquiao's Facebook page on the day it was signed in February. Pacquiao posted the first page of the term sheet before deleting it, but not before it was screengrabbed.

While the page of the term sheet does say that Mayweather and Top Rank will "jointly own and promote the event," it also names Mayweather as lead promoter and "sole negotiator" of the deal with MGM.


Without a signed agreement, a single ticket still has not been printed and tickets to the closed circuit viewing of the fight at MGM Hotels also have not gone on sale. A source with knowledge of the talks said that MGM proposed on Tuesday to be allowed to start selling the closed circuit tickets and any public tickets to fight immediately, with everything else frozen as talks proceed.


"Tickets for a fight like this are often available months out," said a high ranking executive in the ticketing business, who requested anonymity. "Distributing this many tickets in this short amount of time is already a nightmare. With physical tickets, there's going to have people worth millions waiting on long lines just to get what they were promised."


Last week, Pacquiao's manager, Michael Koncz, told the Associated Press that the term sheet wasn't being signed by Mayweather's camp because, he guessed, they were looking for more tickets.


"I can only surmise the motivation is greed and an attempt to manipulate the tickets, otherwise why the holdup?" Koncz said.


But a source familiar with the negotiations said the allotment of tickets is pretty clear with MGM getting 40 percent of the tickets and the two promoters getting 30 percent each.


Arum says he's not signing the deal until Top Rank gets named as a signatory on the agreement.


"This kind of behavior is one of the main reasons why Mr. Mayweather decided to move on with his own career and become vastly successful and make hundreds of millions of dollars on his own," Ellerbe said, alluding to Mayweather leaving Top Rank in 2006 to become his own promoter. "Bob wants to be the focal point of everything and create controversy that doesn't exist."


When asked if he thought the fight was going to happen, Arum said he thought it would.


"MGM is licensed by the gaming commission," Arum said. "They can't do this type of subterfuge and keep their license. If they don't do anything, the governor will step in and make this fight happen."


Said Ellerbe: "Despite all of this, I'm confident the world will get to see the fight they've been waiting for."


Fans sure hope so. Some have paid more than $1,000 a night for hotels in Vegas on fight night, while others have already paid $99.95 to order the fight through their cable provider.