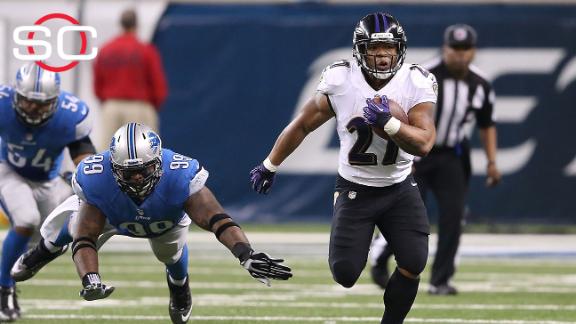 Former Baltimore Ravens running back Ray Rice wants the same opportunity to resume his NFL career as Adrian Peterson and Greg Hardyhad -- both of whom missed nearly the entire 2014 season for off-field transgressions that embarrassed the league.

According to sources directly involved, Rice and a group of supporters that includes former Tampa Bay Buccaneers andRutgershead coach Greg Schiano have been initiating contact with NFL teams in an attempt to get the passed-over player into a trainingcamp.

Rice, 28, has relocated from the Baltimore area to Connecticut and has been working out daily to get in shape for a chance he might never be provided. One source said Rice is not motivated by money because he made $25 million in his final 18 months with the Ravens. Rather, he at least wants the opportunity to stand in front of an NFL owner or coach and make his case for a chance to compete for a roster spot, the source said.

Rice has not played since he was released by the Ravens after video emerged of him punching his then-fiance Janay Palmer, who is now married to the former Raven. While Peterson just received a restructured contract with the Minnesota Vikings that includes millions in new guaranteed money and Hardy signed with the Dallas Cowboys even before his suspension was reduced two weeks ago from 10 games to four, Rice has drawn minimal interest and no offers.

One team seriously considered an offer to Rice, but team ownership became uncomfortable late in the process because of concerns about public reaction to signing him given the taped incident.

That decision came despite positive reviews from some members of the Ravens front office. GM Ozzie Newsome supported Rice during his appeals hearing, insisting to commissioner Roger Goodell that the player fully disclosed the truth to the team when it investigated the incident that happened in an Atlantic City, N.J., casino hotel.

According to NFL general managers and personnel directors, Rice is seen as declining player at a young man's position, where there are abundant options. His rushing yards, average per carry and touchdown totals declined in each of his final three years with the Ravens.