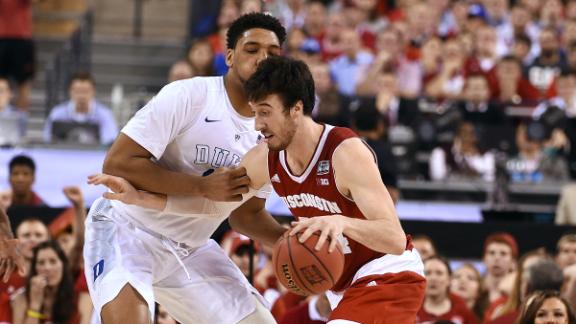 
The award was presented in Los Angeles during "The College Basketball Awards Presented by Wendy's" show on ESPN2.


There was a bit of confusion earlier Friday when two advance releases were sent out by award organizers. One said Kaminsky would win the award, while another referred to Duke's Jahlil Okafor as the winner in its headline, but included text about Kaminsky.

"Two of the draft releases we prepare were incorrectly issued to the media," organizers said in another release Friday afternoon. "The winner of the 2015 John R. Wooden Men's Player of the Year Award will be announced tonight as part of the College Basketball Awards."


Kaminsky is the first Wisconsin player to win the Wooden Award, and he is the first winner from the Big Ten since Michigan's Trey Burke won in 2013.