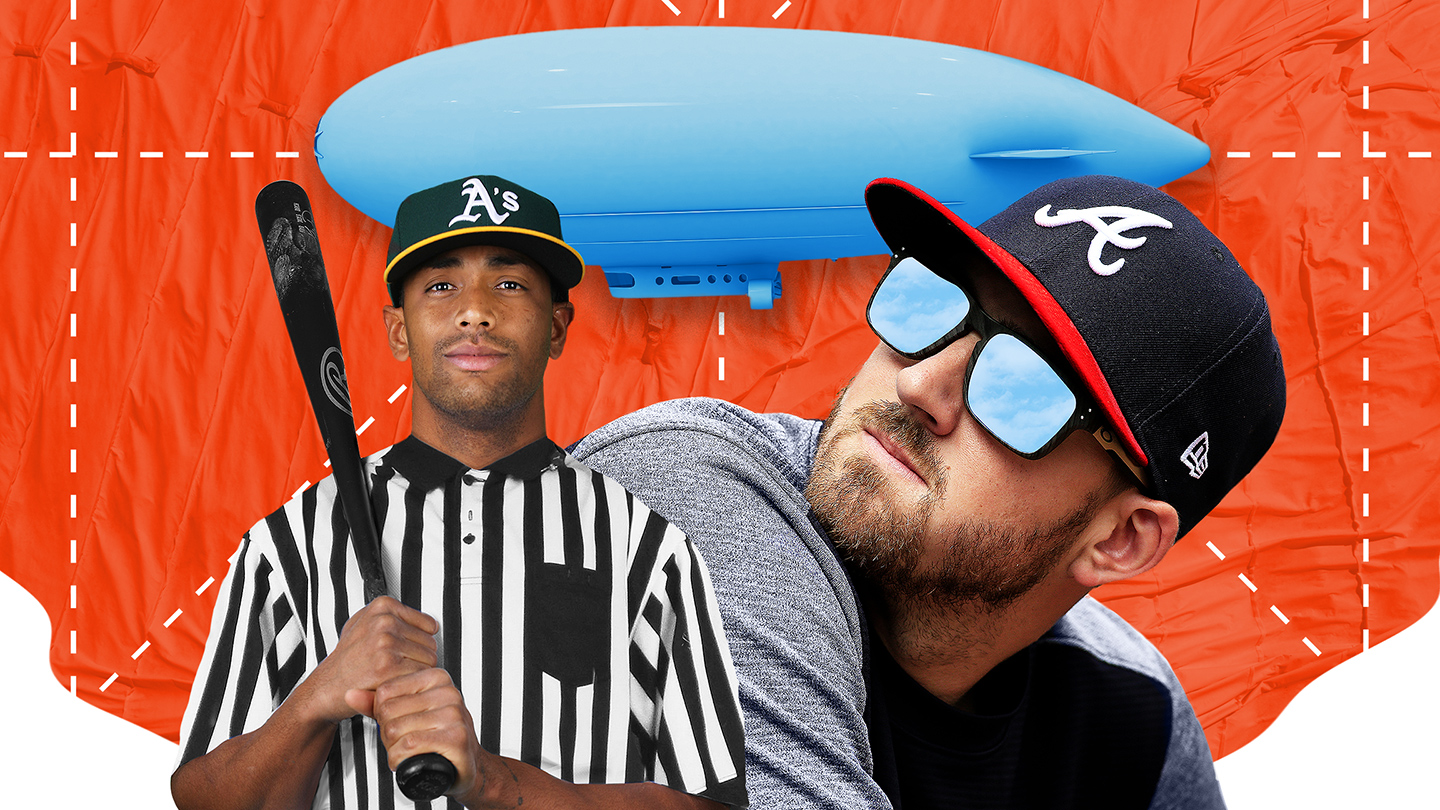 To protect their privacy, pro athletes have long been known to use bogus names when checking into hotels. But bogus jobs? Yep, that's a thing, too. As much as Americans love talking about work, the guys who play the American pastime for a living would rather not talk about it. Like, ever.

In the spirit of true journalism (and nosiness), we canvassed MLB clubhouses to find some of the game's go-to counterfeit careers.

Kevin Gausman, Atlanta Braves: I'm a blimp folder. I just fly around with the pilot and make sure to type in the right things. Sometimes we'll have football games, and you have to type in "Go Patriots" or "There's free Bud Light after the game," and then we land, and we deflate the blimp, and I start folding. It takes a long time. Usually a couple of hours, but I try to get it done pretty quick. People always assume that someone's telling the truth, especially when they first meet you and ask what you do. They don't think that you're lying. So a lot of people just go with it. They don't think of the fact that there's no way a blimp ever gets folded. I guess people just aren't that smart.

Patrick Corbin, Washington Nationals: When I was with the Diamondbacks, a good one was an air-conditioning company called Air-izona. We were in business selling air conditioners.T.J. McFarlanddoes a good job with that. We would just let him take off with it and see what happens. Once, we went to the hotel in Pittsburgh, and we all had our jumpsuits on, and he said we were a professional cornhole team. That was pretty strange because there were about 60 of us walking in, and only two people can play cornhole at a time. But the lady didn't pick up on it. She didn't believe there was professional cornhole, but we convinced her there was. It has been on ESPN before, so I'm guessing that's professional.

Khris Davis,Oakland A's: I tell them I work at Foot Locker. I wouldn't pick a profession that I don't know anything about. I know a little something about shoes. Usually if I use that story, I'm on vacation or somewhere I don't want to be known. Nobody really cares about a shoe salesman, so the conversation doesn't last long.

J.T. Realmuto, Philadelphia Phillies: The latest one I used was after I got a scratch on my nose sliding into home plate. Nice little wound. A couple of days later, somebody asked me what I do for a living. I said I was an amateur boxer. Nothing big, just kind of a small-name guy. He bought it, but I didn't have to go too far into detail because once I said I was a small-time amateur, he didn't really care. If people really are fans of baseball, you can tell the ones you don't want to have that conversation with. And this guy was one of the people I didn't feel like talking to for three hours about baseball. If they're not a fan, they'll just say, "Cool. You play baseball -- big deal." But if it's a huge baseball fan, they'll start asking all types of questions.

Corey Dickerson, Pittsburgh Pirates: Where I'm from, in Mississippi, a lot of guys are in the oil field. So I tell them I'm an E-line operator that runs explosives. That's what my brother does. He started at a young age and worked his way up from deckhand to supervisor to E-line operator, out on the water in the Gulf. When they close down a drill, they run explosives down the pipe and basically blow it up. I guess you don't want a standing drill pipe. Instead of it being stuck in the ground and you can't get the rest of it out, they blow it up and disconnect it.

Justin Upton, Los Angeles Angels: Financial guy. My firm is based out of Los Angeles. We work with athletes and actors and actresses. I start spitballing from there. I've never been caught. Nobody ever recognizes me. They're like, "You look familiar." And I'm like, "I get that all the time." Usually it ends right there. They've gone as far as saying, "You look like Justin Upton." And I go, "Yeah, I get that all the time. I do look like him."

Mike Zunino, Tampa Bay Rays: I tell people I work in construction. My father-in-law is a contractor, so I've learned stuff through him, and it's a good alias. We've done flooring together. We've done some woodworking. Once we bought our home and started doing stuff like that, I leaned on him to teach me so that we weren't always bringing over a handyman to do it. I built and mounted some floating shelves for my son's room. You see something come from nothing, and it's pretty cool. The biggest fear is that you run into somebody else that does the same thing, and now you're like, "Oh crap, now I've really got to answer some questions here." If that happens, you fake a phone call and hope you never see that person again.

Zack Britton, New York Yankees: I was out with my cousin one time and got to talking to some people, and inevitably someone asked what we do. We just didn't feel like bringing up the whole baseball thing, so my cousin told him that we were football pylon manufacturers. First, he was like, "What's that?" There happened to be a football game on, so we're like, "See the thing at the goal line? Those are pylons." He was like, "What? That's a business?" There can't be that much to know about manufacturing football pylons, right? We kind of just rolled with it, and the guy lost interest immediately. It's not a conversation starter -- it's a conversation ender. And that's kind of the whole point.
Report a correction or typo
Related topics:
sportsespnatlanta bravesmlbjt realmutonew york yankeesphiladelphia phillieswashington nationalspittsburgh piratesjustin uptonoakland athleticskhris davismike zuninotampa bay rayszack brittoncorey dickersonkevin gausmanlos angeles angelstj mcfarlandpatrick corbin
Copyright © 2022 ESPN Internet Ventures. All rights reserved.
TOP STORIES
Amtrak train derails in Missouri; injuries reported
Video: Giuliani slapped on back inside supermarket, worker arrested
Investigation continues after 7-year-old drowns at rented pool in NJ
Video shows man stealing puppy, riding off on scooter in NYC
'Full House' star shoved by police during Roe protest, video shows
Truck carrying fireworks catches fire on I-287 in NJ
Actor Danny Bonaduce opens up about battling mystery illness
Show More
Staten Island judge invalidates NYC's non-citizen voting law
Vandalized subway trains lead to a messy morning commute
Several injured in fiery 4-vehicle crash on Belt Parkway
AccuWeather Alert: Showers and Thunderstorms
MTA's bus service changes in Bronx get mixed reaction
More TOP STORIES News