From hurricanes to coronavirus, three Puerto Rican athletes share their stories of what the island has faced 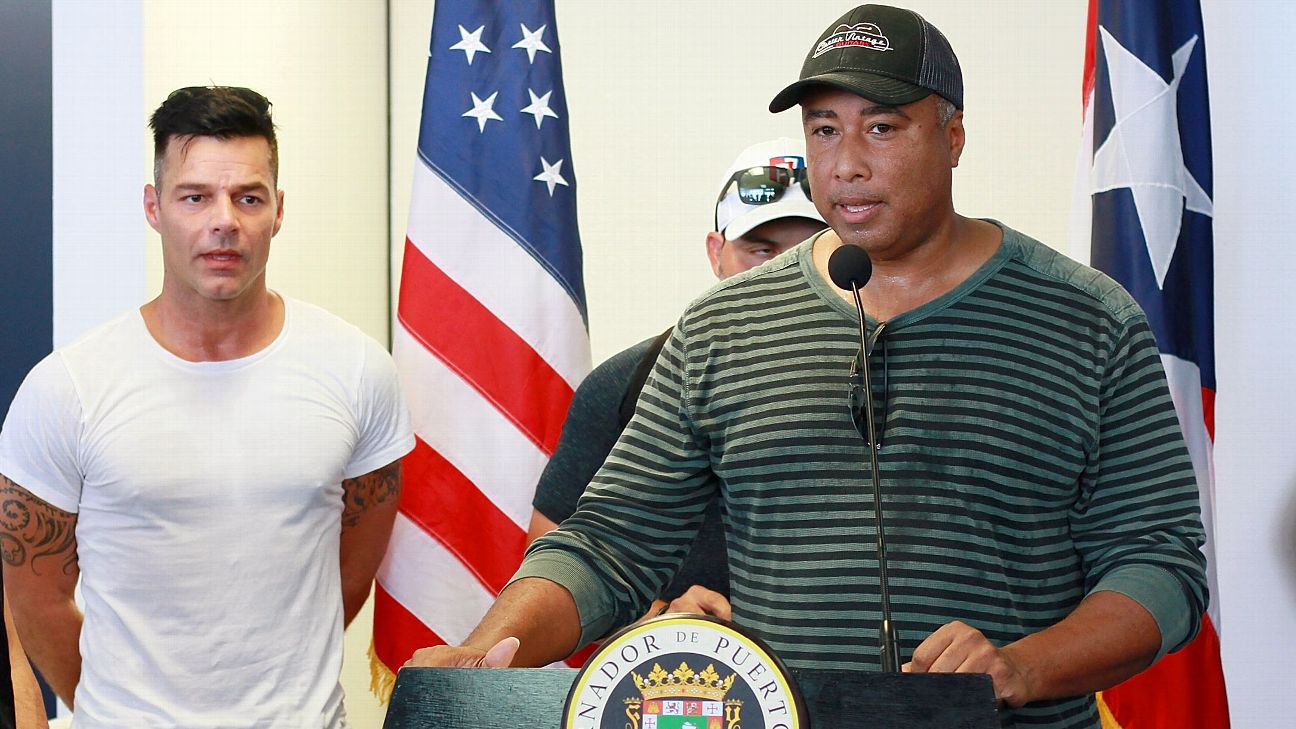 First, in September 2017, came a borderline Category 5 hurricane, one of the most powerful ever to hit Puerto Rico and the mainland United States. Hurricane Maria caused an estimated $90 billion in damages and killed more than 2,900 people in Puerto Rico. Just as the island was starting to recover from the destruction left in the wake of the hurricane, in January 2020, a 6.4 magnitude earthquake damaged some 8,000 homes.


Then, in March, as Puerto Ricans were busy rebuilding, still from the hurricane as well as from the earthquake, the coronavirus pandemic reached the island. The entire island was shut down immediately, enforcing some of the strictest quarantine rules in the world. The island -- with a population around 2.8 million people -- has recorded 7,465 coronavirus cases and 153 deaths, according to The New York Times. (And the misery doesn't end there. Last week, a 5.3 magnitude quake hit the southwest area of the island.)

Some Puerto Rican athletes have lived through all three. During Hurricane Maria, Olympic runner Beverly Ramos sat in darkness for days, her phone's battery having died in the first few hours without electricity.

"I had no idea what was going on. I wasn't able to see at the moment the pictures and images -- we couldn't watch the news, so we didn't know. The [mainland] United States knew more about what was going on in Puerto Rico than us," Ramos said.

The one thing that's starkly different with COVID-19, according to all three athletes, is the inability to be able to do the one thing Puerto Ricans are taught to do: Gather as a unit and work together.

Now, with the pandemic raging in the mainland United States, the three Puerto Rican athletes share intimate details of the island, how they overcame the destruction left in the wake of the hurricane and earthquake, and how they know the resilience of the islanders will help them through the pandemic.

That's what Ramos, 32, remembers thinking while sitting in her living room on the first day of COVID-19 quarantine -- the second week of March 2020. She'd been in lockdown just two and a half years ago in September 2017, when Hurricane Maria was about to make landfall. Carmen Yulín Cruz, the mayor ofSan Juan (which is the capital city and is next to Carolina) had given a similar news conference that reverberated throughout the island then: "For your safety, stay indoors."

During the three weeks after Hurricane Maria, Ramos left the house only a few times, mostly for groceries. The first few days, in scenes not unlike those around the mainland U.S. during the coronavirus, found people in lines outside grocery stores and, once inside, hoarding toilet paper, paper towels and rice.

As soon as the virus reached Puerto Rico, the entire island was shut down. The governor, Wanda Vázquez, set some of the strictest rules in all of the United States: No gathering outside, no walking or running in parks. No leaving the house -- even for essential services -- after 7 p.m. Just like in 2017.

Three weeks after Hurricane Maria, when Puerto Rican residents slowly ventured out in their cars, Ramos made her way around the island, taking in the destruction the hurricane had left in its wake. Now, when she drives out to get groceries, all she sees is emptiness. No physical signs of destruction, but no sign of anything that makes the island unique.

"The things that make us, us -- the dinner gatherings, the Latina music playing in every street, kids playing in parks or yards -- all of that was gone," Ramos said.

After the hurricane, all the anger and sadness she felt, she threw at the destroyed houses, the shattered electric poles and the caved-in roads. Then, like most Puerto Ricans, she cooked a bunch of food and got to work, helping to clear out the debris and rebuild homes and roads.

In hindsight, she realized it was probably for the best that, because of power outages, they couldn't see the news after the hurricane. That way fear didn't paralyze them. Instead, they focused all their energy on helping each other, getting food and water to worst-hit communities, cleaning the streets, all the while holding each other and saying, "We are going to be OK; we are going to make it through this."

"Now, I have all these emotions -- sadness, anger -- but I don't have anywhere to put it," she said. "I can't touch a human, so forget about bringing a bunch of people together to come up with a solution."


Her parents work at two different hospitals -- as administrative staff -- and while the rest of her family hunkered down, her parents left every morning to be around hundreds of COVID-19 patients.

"I am scared for my parents every day," she said.

Ramos helps restock the groceries in her parents' house when they're at work. She reminds her mother to immediately shower and wash her clothes after work. Sometimes she goes over to her parents' place and stays at least 10 feet away.

Most days she feels helpless, but, she decided, if staying at home is helping people, then that's exactly what she's going to do.

If traditional ways of helping aren't possible, at least -- unlike with the hurricane -- she still has electricity and an internet connection. That is more than enough to reach out and bring her community together.

Keeping Puerto Rican children in mind, she put together a list of physical activities for the children of the island in conjunction with New York Road Runners' Active at Home campaign, providing a Spanish language version for the island.

"We find our own ways to help, always," she said, and smiled.

As soon as the hurricane hit, Puig, 26, whose entire extended family lived in Puerto Rico, panicked.

The day after her tour of Asia ended in October 2017, Puig got on a plane to San Juan with career Grand Slam winner Maria Sharapova. It was a few weeks after Hurricane Maria had taken thousands of lives.

Puig often felt overwhelming joy upon returning home; that's how spontaneous her reaction was on seeing the island. But, in October 2017, no positive emotions overwhelmed her. She looked around at an island she didn't recognize. It was like a war zone, chaos in every direction she turned, helicopters flying too close to feel comfortable and National Guard troops patrolling the streets. Tears instantly filled her eyes.

Puig established a YouCaring campaign to raise money to help rebuild the island. Armed with portable stoves, propane cylinders, solar lamps and radio units procured from the $150,000 in funds she collected through her campaign, she spent days traveling through the worst-hit areas, providing people with supplies.

Puig has been in Miami with her parents while Puerto Rico has been under a strict lockdown. Her grandparents have not left their high-rise apartment in almost three months, their groceries being left on their doorsteps by relatives. Puig watched the news fervently as the virus made its way to the most vulnerable segments of the population, the same way the hurricane had done, and she felt helpless, the uncertainty of the timeline making her restless.

The island is in Phase 3 of reopening, and authorities are cautiously optimistic. On July 15, Puerto Rico will allow non-U.S. international travelers.

Puig's aunt, who is the principal of one of the largest schools in San Juan, is working to figure out a long-term solution -- or the new normal -- if schools reopen this fall. In 2017, Hurricanes Irma and Maria left schools closed for two months. In 2019, heavy earthquakes on the south coast resulted in extended school closures and more than 250 public schools were permanently closed. Since March 2020, the schools have been shut again because of COVID-19, and the undependable internet connection on the island meant limited online classes.

Puig sees it as another chance for Puerto Ricans to fight back.


"It goes without saying that Puerto Ricans have an unlimited amount of strength," Puig said. "You would have expected Puerto Rico to just completely cave under Hurricane Maria, or absolutely trash itself after the earthquake, but that wasn't the case. In each of those instances, everybody in Puerto Rico united together to try and rebuild and come back stronger."

Williams was 19 -- two years before his debut with the New York Yankees -- in 1989 when Hurricane Hugo left 28,000 people homeless and most of Puerto Rico without power and water.

As gusts of wind shook his house, Williams remembers thinking he might not survive.

When he landed in San Juan 28 years later, and a few weeks after Hurricane Maria in 2017, he was convinced he had gone back in time. The same feeling -- as if someone had taken a giant baseball bat and swung it over and over across the island, scraping away trees, houses and lives with it -- kept coming back to him. Vega Alta (located on the northeast coast of the island), where his brother, cousins and nephews lived, was one of the hardest-hit parts of the island, and clean water and power were luxuries they didn't have.

Along with his community, where people still call out, "Hey, Bernie" when they see him, Williams went to work, rebuilding houses and procuring basic necessities.

Later, Williams watched proudly as thousands of Puerto Ricans marched outside the governor's mansion, La Fortaleza, in July 2019, calling for the resignation of the then-governor, Ricardo Rosselló. Years of corruption and mismanagement, along with an upcoming impeachment proceeding, resulted in an outpouring of anger from the people of the island. Rosselló resigned to thunderous celebrations by protestors.

"In this whole process, they managed to take down a governor who has shown to not have the best interest of the island," Williams said. "With all that [going on], they were about to point to something really wrong that was going on, and their voices were heard, which to me is a testament to how resilient the Puerto Rican people are, and I am very proud to be a part of that community."

An MLB star turned jazz musician, Williams has a life that rarely slows down. Now, he has gone from traveling the world -- for baseball and for music -- to being stuck at home in New York. While monitoring the coronavirus pandemic, as a black Puerto Rican, he is fervently following the Black Lives Matter protests, calling them "long overdue."

"As a professional athlete coming up in the ranks, every process that I went through as a black Puerto Rican, you have experienced a third level of racial discrimination, and it's a given. I grew up with the mentality thinking I have to not only be equal in my performance but I have to do double or triple to exceed everybody's expectations just to even be considered.

"Every time we have an opportunity to push and make things happen, we should take advantage of that -- this is history in the making here."

Williams knows fighting, surviving and rebuilding are words built into Puerto Rico's national ethos, but the COVID-19 pandemic is something different. When Williams landed on the island in mid-June this year for a funeral, his temperature was taken, and he was asked a thorough set of questions -- how long will you be on the island? Where are you going to be staying? With whom will you be in contact? With whom have you been in contact before this visit?

Every other time he has landed on the island, he has been met with hugs, emotions, sadness and profound gratefulness. But, this time, all he felt was eeriness. The island was so silent, it almost didn't feel like the island.

There were no strangers yelling, "Hey, Bernie, how is it going, man?" or "Hey, Bernie, come over for dinner sometime!" His brother, who had just recovered from shingles, was extremely cautious, so Williams took all precautions to stay safe around his family.