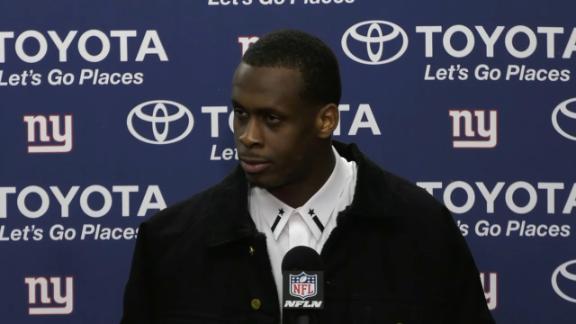 Before making just his second start since 2014 and first start as New York Giants quarterback, Smith caught a whiff of a comment made by his former coach and current analyst Rex Ryan. He didn't like it.

It came not long after a report from ESPN's Adam Schefter and Chris Mortensen that coach Ben McAdoo could be fired by Monday.

"No, I didn't see that, and I love Coach Mac. I think we all do," Smith said before completing 21 of 34 passes for 212 yards with a touchdown and two fumbles in a 24-17 loss to the Oakland Raiders. "I enjoy playing for him. I want to continue to play for him as long as I can.

"But I did see one of my ex-coaches say he didn't want me to be his quarterback, and that really upset me, you know? A guy that we saved his job in 2013, and we fought our ass for him both years, and for him to come out and say that just shows you how much of a coward he is."

Ryan said on the show: "Geno Smith. I love Geno Smith; great guy, I just don't want him playing quarterback for me. However, he gets a great shot today because he's going against the Raiders, who are dead last in interceptions."

Smith was drafted in the second round in 2013 by the New York Jets. He was Ryan's starting quarterback his first two seasons.

Smith started and finished his first game since 2014 -- when Ryan was his coach -- on Sunday in Oakland. Beforehand, Ryan's comment caught him off-guard.

"I was just sitting in my room watching because we have the time difference," Smith said. "So I am just watching a little bit of football and, you know, see that happened, and it is like, wow, the guy, first of all, you drafted me. Second of all, you started me. Third of all, I went out there, and I gave you everything I had, and then you go out and say that. It's unfortunate."

It's fair to say that the two won't be exchanging Christmas cards anytime soon.

McAdoo said Smith didn't do anything to lose the opportunity to start again in place of Eli Manning, who saw his string of 210 consecutive regular-season starts come to an end.

The Giants next play Sunday at MetLife Stadium against the Dallas Cowboys. It could be another opportunity for McAdoo and the Giants to evaluate Smith.

Smith, 27, started slowly against the Raiders but showed flashes at times throughout the final three quarters. He led an impressive drive in the fourth quarter that was capped by a 10-yard touchdown laser to rookie tight end Evan Engram that drew the Giants within three. Overall, he was sufficient.

"We said we're going to take it one week at a time, and these games are emotional," McAdoo said. "So to stand up here and make a decision right here after the football game is not a good way to go about [naming a starter]. We'll take a look at the tape first and put our heads together and see where we want to go with it."