George Steinbrenner IV, 22, fits right in at Indianapolis 500 as a team owner 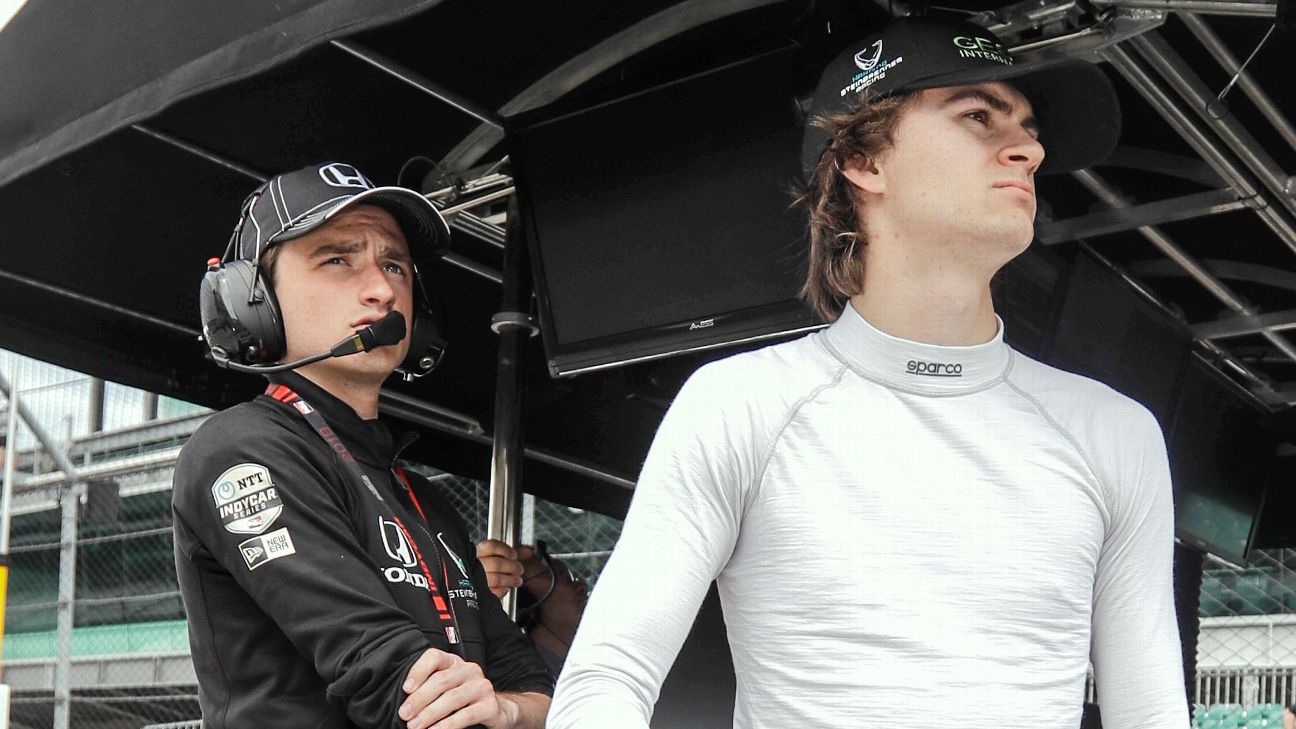 Speedway, IN -- Surnames mean a lot in any business, or really any corner of the world. But in American auto racing, they can mean everything. Especially at the Indianapolis Motor Speedway, where last names are recognized much more quickly than firsts. This is a universe that is still ruled by the likes of Andretti, Unser, Foyt and other bloodlines that have long coursed through Gasoline Alley.

"Indianapolis is definitely a place where last names can really mean something to people, and I'm fortunate that mine does," says Colton Herta, a 19-year old wunderkind who will make his Indy 500 debut on Sunday. His father, Bryan, has been a mainstay of American open wheel racing for more than a quarter century, winning four times as an IndyCar driver and two Indianapolis 500s as a team owner. "There's definitely a level of pressure and expectation that comes with certain names. But I don't know if there are many that raise eyebrows quite like this one does."

Herta takes his finger and taps the name embroidered over the left breast pocket of his team uniform. It reads "Steinbrenner."

The co-owner of Herta's racecar is George Michael Steinbrenner IV. Yes, he's related to that George Steinbrenner, the late owner of the New York Yankees. Famous for buying the most storied franchise in professional sports and pulling it out of the doldrums. Infamous for his inflammatory leadership style and quick-trigger/high-dollar hiring and firing practices. George IV is The Boss's grandson and son of Hank Steinbrenner, part-owner and co-chairman of the Yankees.

"Whenever I enter a new room there are always going to be preconceived notions when it comes to my name," the youngest Steinbrenner confesses. "But I also believe that how I handle myself when I walk into that room is what determines how people will perceive me in the end. So, I try to do that the right way."

In other words, when a 22-year old kid walked into his team's garage at the Racing Capital of the World, a garage with his name over the door, crew members of a certain age didn't immediately go running for their lives. He is so soft-spoken, much more like uncle Hal than father Hank, they typically go about their business without even realizing he's in the room. "You don't have to worry, guys," he says, grinning. "There won't be any pink slips in your locker."

By the way, that age, it's not a typo. He is actually 22, the youngest Indy 500 team owner by a couple of decades and also the youngest in IndyCar's century-plus history. And yes, his driver is only 19. They love to hang out, sleep on each other's couches and play racing games on Xbox. But on March 24, they also became the youngest owner and driver to win an IndyCar race, taking advantage of a race that incredibly worked itself into their favor at Circuit of the Americas in Austin, Texas.

"It was so spectacular, and we knew that we had a car that could win, if everything fell our way," Steinbrenner recalls, still with a tinge of disbelief even two months later. "It just happened way earlier than we expected, or than anyone expected. Even the juggernauts, with all the big names and resources and the history, they still the right chemistry. And they still need a little bit of luck. They still need to have those one or two right people in place and have those one or two things to fall their way, just right, to win."

"Yes, that applies even to the Yankees."

Chemistry between the owner and driver has never been a problem. They first met six years ago at the Lime Rock Park road course in Connecticut. Steinbrenner was 16 and still in high school. Herta was 12 and just starting out in the lowest levels of open wheel racing. They hit it off immediately, and when Herta left to race in Europe, his pal George figured out how to tunnel around intercontinental viewing restrictions to watch Colton's races online.

Growing up in Florida, George IV loved baseball. He still does. That's the Steinbrenner in him. However, there was some auto racing in that bloodline, too. His father briefly dabbled in NHRA Drag Racing in the 1990s (before The Boss shut that down). And his grandfather frequented the Indy 500 in the 1970s when he had a partnership with team owner Pat Patrick, an open wheel legend.

But it was the other half of George IV's DNA, his maternal side, that tugged him toward the racetrack. His cousin Tony Renna was a driver on the IndyCar ladder. Uncle Chris Simmons is one of the most successful race engineers of the modern IndyCar era. And after his mother divorced Hank, she married Sean Jones, who raced in the Barber Saab development series in the 1980s and formed a lifelong friendship with one of his rivals, Bryan Herta.

That's why young George was at Lime Rock Park six years ago, to watch the son of his stepfather's friend race. A few years later, after one semester at Stetson University, Steinbrenner called his stepfather and said he was moving to Indianapolis to find a job in racing. Jones called Herta, who gave Steinbrenner a job as a "busboy" on his Rallycross team.

"No one wants that job," Colton Herta explains. "One day you're taking out the trash, the next you're picking up lunch. And when you're working on the race cars, you're mostly just cleaning them. Rallycross cars, they get really dirty. George is an excellent car polisher. He could have probably written a check and bypassed all of that work. But that's not how he wanted to do it. He wanted to earn it. That's George."

Steinbrenner knew he wanted to be a team owner, not a driver. Any racing dreams he might have had were erased on Oct. 22, 2003, when Renna, his cousin, was killed during a test session at Indianapolis Motor Speedway. George was only 6 years old and it rattled him. It rattled the whole family. But it didn't keep them away from the racetrack.

"The ownership interest came natural to me because of my grandfather, there is no question about that," he explains. "And I think that's why I wanted to do every job in the race shop, even if briefly. That helps me be a better owner, understanding how everything works and everything that everyone does. When we would go to races in St. Petersburg, IndyCar racing right there at home, I was taking mental notes all of the time. I wanted to understand all of it. I still do."

That's why this year's Grand Prix of St. Petersburg felt like such a through-the-looking glass moment. Over the winter, he struck a deal with Harding Racing, which had just completed its first IndyCar season. Steinbrenner had fielded cars in the Indy Lights Series (think AAA baseball) as a partner with his father and Michael Andretti, hiring pal Colton Herta to be one of his drivers. Now the two friends were moving up to the big leagues with newly named Harding Steinbrenner Racing.

There in St. Pete, in Steinbrenner's own backyard, with a grandstand full of friends and family, he wasn't there to watch the race with them. He had a car in the race. Even still, he doesn't remember having any "a-ha" moments of reflection. "No. I was too busy bugging everyone on the team about our race strategy," he recalls. "What kind of tires were we going to start the race on?! That's what I was thinking about."

This entire month of May in Speedway, Indiana, has felt like home, too. He has lived in nearby Carmel for several years now, so Indiana is home. Despite their eternal ties to Tampa and the Bronx, the Steinbrenners are actually Midwesterners, so it all feels very natural to George IV, as does being in Gasoline Alley. At least, until it comes time for the owners' meetings.

That's when his "how I handle myself when I walk into that room" rule really kicks into effect.

"There's Roger Penske. There's Michael Andretti. There's Chip Ganassi. There's A.J. Foyt. What do I do when I am in the room? I keep my mouth shut, that's what I do. I listen," he says. "And if I have any questions, I whisper them to Bryan (Herta) or I wait until later to ask him in private. I want to ask them one day. The only way I can do that is to watch and learn and be thankful that they allow me to be in that room and at this racetrack with them."

As he wraps up his thought, a fan in a Yankees T-shirt calls out and asks for an autograph. Another fan walks by in an Atlanta Braves cap and Steinbrenner jokingly shouts out, "Hey, you're wearing the wrong cap!"

The guy points to George Steinbrenner IV's hat, black with the green lettering of sponsor Green Energy Sustainable Solutions (GESS), with the distinctive Harding Steinbrenner Racing logo on the side. "You've got the wrong cap on, too, Steinbrenner!"