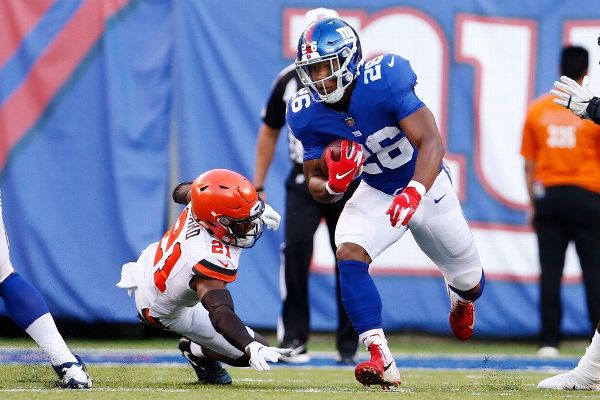 EAST RUTHERFORD, N.J. -- It took all of one play Thursday night in their preseason opener for the New York Giants to see why they drafted running back Saquon Barkley with the No. 2 overall pick.

Barkley had Cleveland Browns defensive end Emmanuel Ogbah staring him in the face at the line of scrimmage on his very first play in an NFL game. He jump-cut to his right, burst upfield, and by the time he was pushed out of bounds had a 39-yard gain.

"That was impressive and that's what you want to see," outside linebacker Olivier Vernon said. "They brought him here just to see, you know, to be that horse in the backfield and make plays. He's been doing that in the collegiate level and now in the big-boy level. He's very talented."

The Giants had only two runs of over 39 yards during last season's 3-13 campaign, both by the since-departed Orleans Darkwa. Barkley went 39 on his first NFL touch, even if it was in a 20-10 preseason loss to the Browns.

"Yeah, started off with a nice run to get things started," quarterback Eli Manning said. "Hopefully more to come."

Barkley had 4 yards on his next four carries. He finished with 43 yards on five rushes in an NFL debut that received the approval of his head coach.

"I loved his first run," coach Pat Shurmur said. "If only they all could be like that. You could see, it wasn't too big for him. He's probably played before bigger crowds at Penn State. It really wasn't too big for him and I think he took the next step in his progress to get ready for the season."

Barkley had already impressed with his work ethic and ability to digest information this spring and summer. The Giants have raved about the way he handles himself on the field and behind closed doors. It was just a matter of seeing it with their own eyes.

This wasn't a regular-season game, but it also wasn't a normal Thursday night for Barkley.

"It was kind of weird," he said afterward. "I was talking to a lot of guys there. For some reason, I didn't get nervous. I didn't really get anxious. It was kind of a weird feeling.

"They said it would probably hit me when the national anthem goes off, but I kind of just got locked in so quick. I just have been preparing for this moment for my whole life and being able to play in the NFL, and I didn't want any other thing to ruin it. It didn't matter if I broke a long run, I just wanted to go out there and enjoy and have fun and take advantage of every rep and opportunity I got."

It didn't take long for Barkley to flash his ability to make big plays. It's what he did consistently in his three seasons at Penn State. Add that to an offense that has playmakers such as Odell Beckham Jr., Evan Engram and Sterling Shepard and the Giants should have their fair share of explosive plays this season.

The Giants had just 41 plays of 20-plus yards last season. Only the Chicago Bears and Baltimore Ravens had fewer.

But Barkley had just one successful run Thursday night. The Giants' first-team offense (without Beckham) managed three points on its two drives. Manning was trying to keep it all in perspective, despite the excitement that came from the first play.

"It's just a run," Manning said. "Let's not go berserk, yet. It was a good run. The offensive line blocked things well, he had a good cutback. It was a good play."