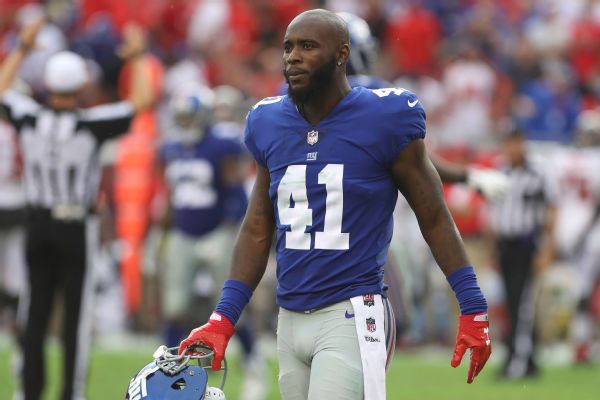 EAST RUTHERFORD, N.J. -- Dominique Rodgers-Cromartie was apologetic and enthusiastic as he returned to the New York Giants after a one-week suspension. He called it a "miscommunication" and "misunderstanding" with coach Ben McAdoo that escalated the situation.

Rodgers-Cromartie was reinstated after a meeting with McAdoo on Tuesday morning. He returned to practice for the first time on Wednesday, one week after he walked out of the Giants facility upset with being informed of his benching Sunday against the Denver Broncos.

"What I did was wrong," Rodgers-Cromartie said. "I admit that."

The benching was the result of a series of incidents, including when Rodgers-Cromartie threw his helmet in disgust and temporarily stormed into the locker room Oct. 8. The Giants pulled Rodgers-Cromartie out of the game because he was limping badly and appeared injured.

Rodgers-Cromartie thought he could still run with the Los Angeles Chargers receivers without any problem. He wasn't happy with the Giants' decision or their desire to hold him accountable for his actions afterward.

Rodgers-Cromartie cleaned out part of his locker and stormed out of the Giants facility several days later. He admitted that was a mistake.

He was welcomed back with open arms. The defensive backs room was thrilled to see him return. Rodgers-Cromartie even gave cornerbacks coach Tim Walton a big hug on the practice field before shaking general manager Jerry Reese's hand.

McAdoo wouldn't reveal specifics on why they decided to reinstate Rodgers-Cromartie or what was said at their meeting on Tuesday morning. He was confident that the problems between coach and player were in the past.

"Absolutely," McAdoo said. "He had a great day [Wednesday]. It's good to see him back."

Rodgers-Cromartie also seemed to put the incident behind.

"Definitely. I told him at the end of the day you'll know if I'm mad. I'm going to come back in here and let you know," he said. "I wear my emotions on my sleeves. I told him I messed up and I understand that and as a coach, you've got to do what you've got to do. Whatever the consequences, I have to accept that and go on from there.

The suspension cost Rodgers-Cromartie $410,588. The Giants (1-5) won their first game of the season Sunday night in Denver without him in the lineup. They host the Seattle Seahawks this Sunday at MetLife Stadium.
Report a correction or typo
Related topics:
sportsespnnflben mcadoodominique rodgers cromartienew york giants
Copyright © 2020 ESPN Internet Ventures. All rights reserved.
More Videos
From CNN Newsource affiliates
TOP STORIES