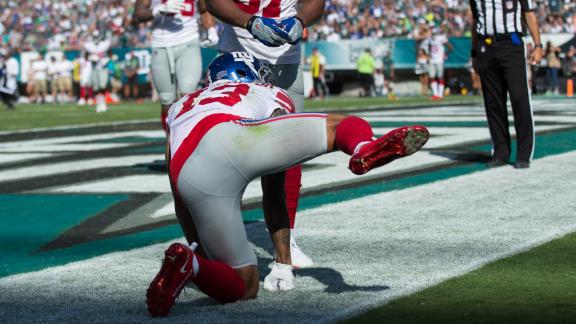 EAST RUTHERFORD, N.J. -- New York Giants wide receiver Odell Beckham Jr. was fined $12,154 for his touchdown celebration in which he simulated a dog urinating during a loss Sunday to the Philadelphia Eagles.

Beckham's actions drew a 15-yard penalty for unsportsmanlike conduct, which was assessed on the ensuing kickoff.

It also left owner John Mara "very unhappy" with his star receiver. The two had a meeting this week in which Beckham said he regretted the penalty but not necessarily his actions.

"I'm a dog, so I acted like a dog," Beckham told reporters after the game. "I don't know if the rulebook said you can't hike your leg. He said I peed on somebody, so I was trying to find the imaginary ghost that I peed on. But I didn't see him."

Beckham also said Sunday he didn't think there was anything wrong with the celebration. He later added there was uncertainty with the new celebration rules.

Coach Ben McAdoo said this week that the celebration penalties reflected poorly on him and that the team has put a plan in place to handle the situation.

Beckham hinted on social media on Monday that his celebration was in response to President Donald Trump's recent comments about NFL players. He declined to address that topic during his weekly news conference on Wednesday.

This isn't the first time that Beckham was fined or suspended for his on-field behavior. He was suspended one game for his actions in a 2015 game against then-Carolina Panthers cornerback Josh Norman. Beckham was also fined multiple times last year for, among other things, taunting, taking his helmet off during a celebration, an illegal block and a confrontation with an official.

Beckham missed the Giants' opener this season with an ankle injury. Sunday was the first time he reached the end zone since the NFL adjusted its celebration rules to allow players more freedom.

He scored a pair of touchdowns in the fourth quarter against the Eagles. He pretended to be a dog after his first score and raised his fist in the air after the second.

The Giants, who visit the Tampa Bay Buccaneers on Sunday, have been pleased with the way Beckham has handled this week.

"He's focused on preparing for the game," McAdoo said. "He seems dialed in a focused on his preparation."