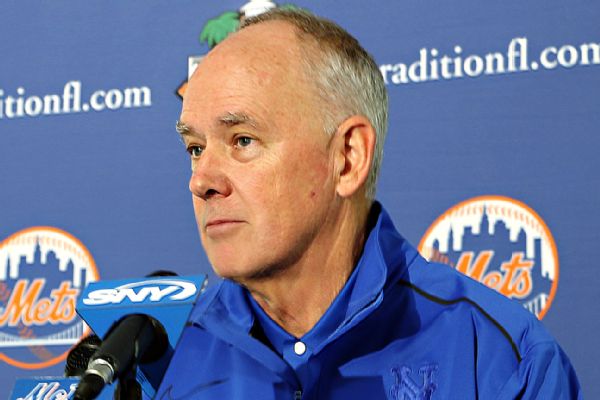 NEW YORK -- Mets general manager Sandy Alderson has been given a contract extension, a move that was long expected.

The team announced the agreement Wednesday, but the length of his new deal was not specified.

Alderson's previous contract with New York, signed in late 2014, was a three-year deal that ran through last season. He succeeded Omar Minaya in October 2010, becoming the 12th GM in franchise history.

Following an extensive rebuild under Alderson, the Mets reached the World Series in 2015 and the NL wild-card game the following year before slumping to 70-92 during an injury-filled 2017 season.

"I feel that we have some unfinished business,'' Alderson said in a statement. "Spring training is around the corner and our quest to return to the postseason will continue.''

It's been a busy offseason for Alderson, although the most significant player he's added to this point was free agent reliever Anthony Swarzak on a $14 million, two-year contract.

New York also exercised 2018 options on switch-hitting infielder Asdrubal Cabrera ($8.25 million) and left-handed reliever Jerry Blevins ($7 million), but there are still holes to plug at second base and in center field.

Alderson and the Mets have said they intend to field a winner next season, yet the club seems reluctant to spend big in free agency.

Alderson, who turned 70 last month, hired Mickey Callaway in October as the Mets' new manager. The former Cleveland Indians pitching coach replaced Terry Collins, who stepped down at the end of the season with his contract set to expire. Collins accepted a front-office position as a special assistant to the general manager.

Glenn Sherlock (third base coach and catching instructor) and Ricky Bones (bullpen coach) are returning in their previous roles.

After beginning 2017 with World Series ambitions that certainly seemed legitimate, New York instead slogged through its worst season this decade. By mid-to-late August, Alderson had traded away a string of veteran regulars who became free agents this offseason, including Jay Bruce, Lucas Duda, Curtis Granderson, Addison Reed and Neil Walker.

Alderson, a Marine Infantry Officer who served in Vietnam, is a Harvard Law School graduate. He was diagnosed with cancer at the end of the 2015 season and had surgery, but kept working full-time while undergoing chemotherapy treatments.