Grady Sizemore to start in center 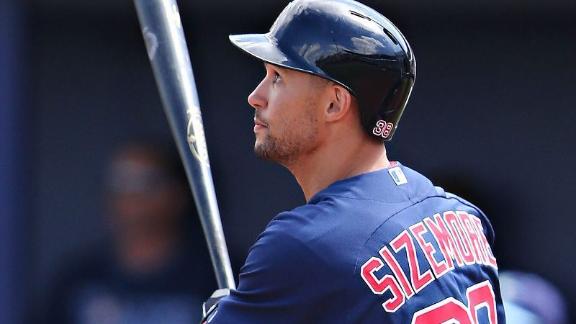 But Sizemore, who has undergone seven surgeries since 2009 and had not played in a game at any level the last two seasons, has passed all physical tests this spring and showed few ill effects from his long layoff, batting .333 with a home run.

"To Grady's credit, he has answered the questions with his play, and he has responded physically," Farrell said.

Farrell shared his decision with the 31-year-old Sizemore, a three-time All-Star who signed a contract for a $750,000 base salary in late January, shortly before meeting with the media late Friday morning.

The manager said Sizemore took it in stride.

Sizemore, who was not scheduled to play Friday but said he will play in the team's exhibition finale Saturday, said he called his father, also named Grady, with the news.

"He took it in stride, like me," Sizemore said.

Sizemore was asked how this compared to making his first major league team as a 21-year-old in 2004.

"I'd say this was definitely a lot more satisfying," he said. "After going through what I've gone through, all the negative things that have happened, it's a long time since I've had positive news, a long time since I've been able to play, to feel this good in this setting, to look forward to coming to the ballpark not thinking, 'What's going to happen next? What's going to hurt today?' Everything's great."

Farrell said the plan is to continue with the same kind of progression that was prescribed for Sizemore this spring, where his playing time was gradually increased. Sizemore just played three games in a row, which is probably the same workload with which he'll begin the season, Farrell said.

"The durability with what we've been able to challenge him with, he's come out of it fine," Farrell said. "And even if he were to be asked to play today, he feels great to play a fourth consecutive day. However, we're not doing that based on the progression."

Sizemore said he wasn't even sure how much he would be able to run again in the wake of microfracture surgeries on both knees and a third knee procedure, as well as surgery on his back, elbow and two operations for sports hernias. He praised Dr. Dan Dyrek, the team's director of medical services, for laying out a comprehensive plan that has worked beyond Sizemore's fondest hopes.

"I think I'm getting there," Sizemore said when asked if he felt he could return to being the player he was before being injured. "I feel great now. I feel as good as I could have hoped coming in before camp, and I think there's still room for improvement.

"I'm not going to put high expectations on it. I'm going try keep improving on what I've done so far."

Farrell said the Red Sox don't believe that Sizemore has reached his ceiling.

"That's the thing that probably has us the most excited," Farrell said. "The repetition, and volume in spring training, he's not hit a physical threshold where there's pushback and it's, 'Uh-oh, his body is not responding, we've got to stop.' There's been none of that. So the gradual increase of games played, there's a cautious level of optimism that he'll become an everyday player again."

Farrell said the club was "open-minded" about the competition for the center-field job, and he acknowledged the improbability of Sizemore having recovered to the degree he has.

"This is a rarity," Farrell said. "There's no question about it. I think it speaks to his work ethic and athleticism. Those are the two main ingredients for why he's going north."

Bradley, who has hit .158 this spring and struck out a team-high 17 times in 57 at-bats, remains a "critical" part of the team's plans, Farrell said.

"Like any competitor, he was disappointed, as we fully expected him to be," Farrell said. "He's a very driven athlete. He looks upon this as a challenge to meet and get back to the big leagues.

"Jackie is critically important to us, not just for today but for what we would consider a long period of time, and we anticipate him being on our major league roster at some point this season. We don't know when. We think it's important for Jackie to go down and get some regular at-bats and get on a little bit of a roll and kind of get his game going, and be like we know Jackie can be."

Bradley showed only glimpses of the player who had stirred so much excitement last spring.

"I knew it was going to be a competing thing," he said. "[Sizemore] played well. I didn't perform in spring training, but I feel like I'm ready for the season and ready to prove it."

"We all didn't, I guess, see Jackie Bradley Jr. this spring," he added.

Asked if he could appreciate what Sizemore had accomplished, making it back to this point, Bradley said: "Oh yeah. For anybody, if you said you didn't admire what he had been through and the things he's been able to do, you'd be lying. He's amazing, a great ballplayer, great person, great teammate."