Griffin excited to team with Jackson 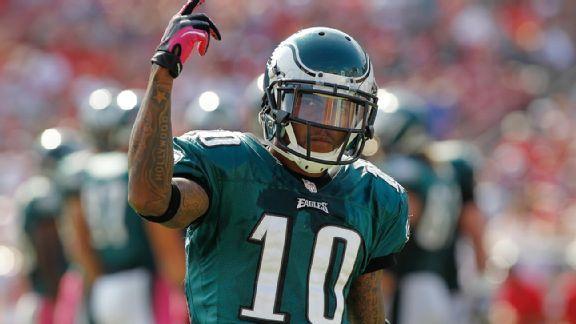 Washington Redskins quarterback Robert Griffin III can't wait to work with his new offensive weapon. He also recognizes that an offense that looks good on paper must still prove itself on the field.

Griffin, on business in Los Angeles, told ESPN.com in a text message that he and the Redskins are excited to have DeSean Jackson on the team.

Jackson and the Redskins agreed Tuesday night to a three-year contract worth $24 million, including $16 million guaranteed.

Jackson arrived at Redskins Park on Wednesday morning to sign his contract, and the team posted a photo to Twitter on Wednesday afternoon of the receiver doing so.

- Washington Redskins (@Redskins) April 2, 2014Griffin spoke with Jackson before his visit to Washington on Monday and said he got a sense of what the former Philadelphia Eagles star was all about. Griffin said Jackson was motivated by the memory of his late father, Bill Jackson.

"I understand his drive and competitiveness to win," Griffin said in the text message. "Always doing it for his dad and now doing it for this city. ... Our team and this city will be there for him."

Jackson took to Twitter on Tuesday night to express his excitement over joining the Redskins.

- Desean Jackson (@DeseanJackson10) April 2, 2014Since the end of a 3-13 season, the Redskins have added a quarterback-friendly coach in Jay Gruden and two receivers. They signed Andre Roberts on the first day of free agency. With Jackson's arrival, Roberts will likely play a lot in the slot.

Jackson provides the Redskins with a dynamic receiver, one who can consistently threaten a defense deep. He also forces defenses to plan to stop him. In theory, his presence should open the middle for Garcon, who excelled in that area two years ago. Last season, the middle wasn't as open and the Redskins were forced to get Garcon the ball more on horizontal routes.

Thanks to Jackson's big-play ability, the Eagles led the league with 80 pass completions of 20 yards or more. The Redskins ranked tied for 30th with 39.

Griffin, too, should be better after a full offseason of work rather than rehabbing his knee.

"It's an exciting time to be a Redskin fan and a part of this team because the firepower that we have with all our guys," Griffin said in the text message. "Everyone needs to understand that we haven't won anything yet, and these next few months will be about building those bonds and chemistry so that we can."

Jackson is coming off an 82-catch, 1,332-yard season with nine touchdowns, tying a career high in TDs and setting one for yards. According to the Elias Sports Bureau, no player had ever switched teams within the same division after a season with 80-plus receptions for 1,200 yards or more.

Information from ESPN's John Clayton was used in this report.