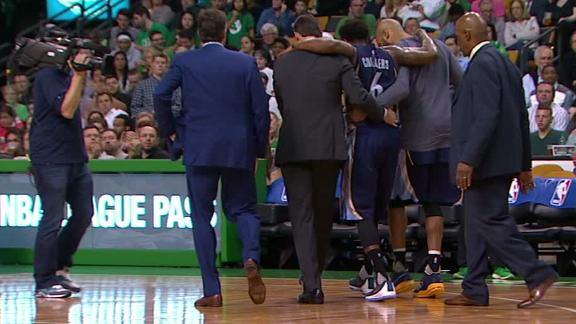 MEMPHIS, Tenn. -- Grizzlies guard Mario Chalmers will miss the rest of the season after rupturing his right Achilles tendon, and Memphis waived the veteran to clear up a much-needed spot on the roster.

The Grizzlies announced both the severity of Chalmers' injury and the roster move Thursday night.

"He has been an important part of our success this season, both coming off the bench and when called upon as a starter," general manager Chris Wallace said in a statement posted on the team website. "But with Mario's season-ending injury and our already depleted roster, it became necessary to free up a roster spot."

Chalmers was hurt with 6:57 left in the third quarter Wednesday night in Boston with the Grizzlies down 64-61 in what wound up a 116-96 loss. He was taken out of the locker room in a wheelchair.

The Grizzlies (38-26) ranked fifth in the Western Conference on Thursday, but the injuries are really starting to add up. Memphis, which hosts New Orleans on Friday night, is expected to use injury exceptions to add help to the roster.

Center Marc Gasol had season-ending surgery to repair a broken navicular bone in his right foot last month. Starting point guard Mike Conley has missed the last two games with a sore right foot, Zach Randolph has been out with a sore right knee in those games, and Chris Andersen -- Gasol's replacement, has been out since dislocating his left shoulder last Sunday.

Jordan Adams has been out since having surgery on his right knee, and Brandan Wright also is recovering from a sore right knee after returning from surgery on the same knee earlier this season.

That left the Grizzlies without seven players and four starters Monday night when they won at Cleveland.

Memphis acquired Chalmers on Nov. 10 from Miami, and he has averaged 10.8 points and 3.8 assists in 55 games with the Grizzlies. He was even better in his seven starts, helping Memphis go 5-2 in those games. He scored 17 points in that win at Cleveland.