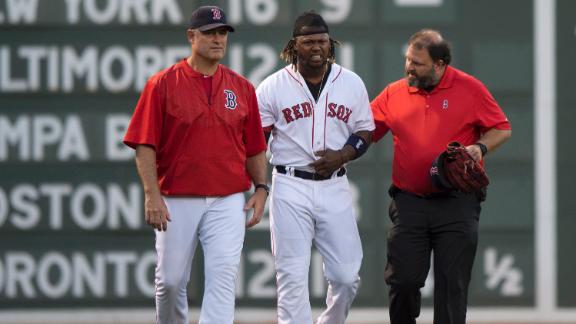 BOSTON -- Red Sox left fielder Hanley Ramirez, who tied David Ortiz's club record for home runs in April with 10, left Monday night's game against the Tampa Bay Rays with what the club called a sprained left shoulder, a joint he has had surgically repaired twice before.

The loss of Ramirez, 31, for an extended period of time would be a devastating blow for the Red Sox, who were not dissuaded by his extensive injury history from signing him to a four-year, $88 million, free-agent contract in November.

Manager John Farrell said after Boston's 5-1 loss to Tampa Bay that no decision has been made to place Ramirez , who underwent medical imaging Monday night, on the 15-day disabled list.

"He's day-to-day right now,'' Farrell said. "We're hopeful over the next couple of days there's some improvement. There's no clear-cut DL at this point, so he's day-to-day.

"I think over the coming days we'll have a better read on how he can recover. We're hopeful that he won't miss significant time."

Ramirez addressed the injury in a series of tweets Monday night, writing:

Ramirez, a career shortstop playing the outfield for the first time this season, was injured when he slammed into a padded grandstand wall in left while sprinting in pursuit of James Loney's line drive into the left-field corner in the first inning. Ramirez briefly had the ball in his glove before making impact with the wall, the ball falling free and rolling toward the left-field wall. Ramirez, in obvious pain, retrieved the ball and made a weak throw toward the infield from a half-crouch before going down on one knee, clutching his shoulder with his head bowed.

Farrell and head trainer Rick Jameyson rushed to his side, and together they walked off the field, Ramirez holding his shoulder immobile. Loney reached second on what was ruled a double and subsequently scored.

"I mean, definitely it's a tough one,'' said shortstop Xander Bogaerts, who was the teammate closest to Ramirez on the play. "He's been one of our most productive hitters so far, and losing a big player like that would be tough.

"But we have a lot of guys that can do the job. Not sure if we can fill in the same stuff that he can do, but at least we have guys that can play good baseball."

Ramirez first experienced shoulder issues in 2007, his second season with the Miami Marlins after being traded by the Sox before the 2006 season in the Josh Beckett/Mike Lowell deal. When the season ended, he underwent arthroscopic surgery for a torn labrum, and he had fully recovered by the following season, playing 153 games while hitting a career-high 33 home runs and making his first All-Star team.

But on Aug. 3, 2011, while playing for the Marlins against the New York Mets at Citi Field, Ramirez injured the shoulder again diving for a ball in short left field, the shoulder popping out of the socket. Originally, Ramirez assured reporters he did not expect to be sidelined for long, but when the shoulder popped out again while he was swinging in the on-deck circle on a rehab assignment, the decision to have surgery again was made. That time, Dr. James Andrews performed open surgery (non-arthroscopic) on Sept. 15, 2011, one that left a 3-inch scar, and while Ramirez played a full season in 2012, he said it wasn't until the following season that he felt the strength in his shoulder had sufficiently returned.

The 2012 season, in which he was traded in July to the Los Angeles Dodgers, would be the last season not shortened by injury. He missed 110 games over the 2013 and '14 seasons with injuries, according to BaseballProspectus.com, having hurt his right thumb, left thigh, right shoulder, eighth rib, left arm, left hand, left leg, right hand, right leg, right abdomen and right elbow. He went on the DL three times in that span, an abdominal strain sidelining him for 14 games this past August, and a hamstring strain (28 games) and thumb ligament surgery (24 games) landing him on the DL in '13. The hamstring strain occurred just five days after he came off the DL from the thumb injury.

Allen Craig replaced Ramirez in left field Monday night. Jackie Bradley Jr., the team's regular center fielder in 2014, was batting .341 in Pawtucket entering play Monday, while Rusney Castillo, the Cuban signed to a six-year, $72 million deal in August, has played two games in the outfield for Pawtucket while recovering from a strained shoulder. In addition, veteran outfielder Shane Victorino(hamstring) is expected to be sent out on a brief rehab assignment Friday, with the hope that he could rejoin the big league team in Oakland by next Monday. 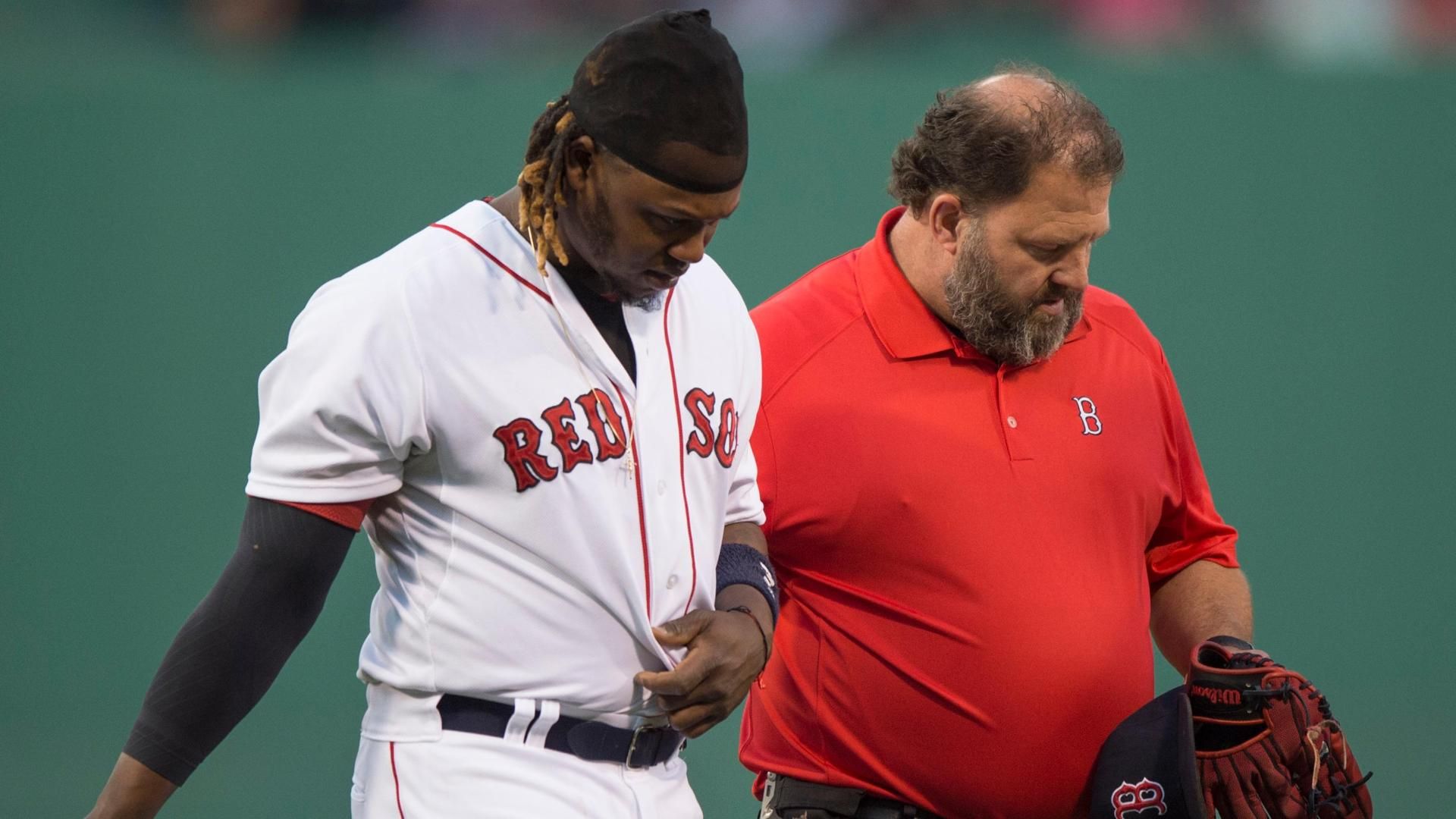