Harbaugh: QB is 'his own person' 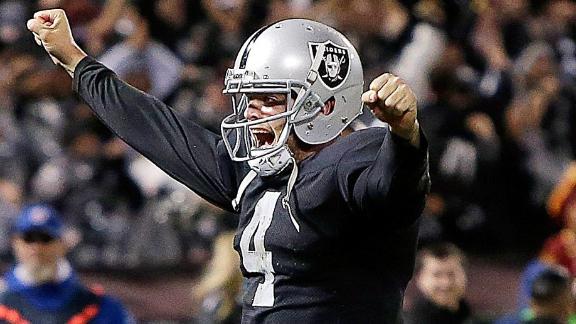 San Francisco 49ers coach Jim Harbaugh went out of his way Friday -- two days before the team plays at Oakland -- to defend Colin Kaepernick for the curt way the quarterback handled his mandatory media session Wednesday, and seemed tweaked that a word count was kept by media members to show just how brusque the player was.

"It's sad, really, because you don't know him," Harbaugh said, without being prompted. "And he's a determined person, he's a spiritual person, he's a very hard worker and he wants to do well and works extremely hard at it. And you get the honest person when you deal with him. If he's not chatty, he's not going to be chatty. He's single-minded when he's playing the game of football and preparing for the game.

Harbaugh was asked what message Kaepernick was trying get across in a news conference that was not so much confrontational as it was unintentionally comedic.

"He's very professional," Harbaugh said, without cracking a smile. "He always stands up. He never dodges or deflects criticism. He takes accountability and he's honest. He tells the truth.

"He's not going to be at somebody's beck and call or bidding. He's going to act the way he acts. He's his own person and I appreciate the honesty. His jaw is set and he is a team player all the way ... it's all a person can do; they do their best. If that's not appreciated, then, you do your best anyway. That's who he is, that's what he does."

Still, many observers, both locally and nationally, questioned if a face of the franchise should represent it in such a manner and whether Kaepernick should be more accommodating.

"A 'face-of-the-franchise' quarterback should be a great leader, by example, the way he works, a team player, all the way," Harbaugh said. "What's in his heart is about the team. He's not about himself. You get the raw honesty.

"If you want somebody to be wordy and that's not who they are, that would be phony to be that. It would be passive-aggressive. That would be being somebody that he's not. His jaw is set; he wants to win this football game.

"He's doing everything that I expect, and I appreciate it."