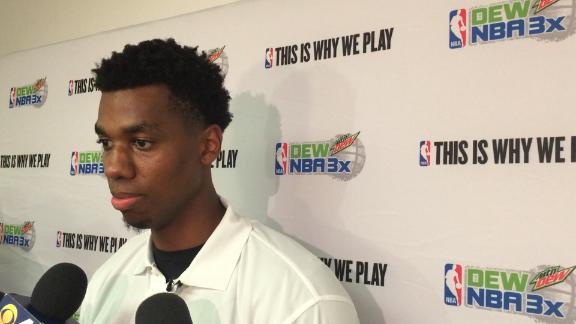 MIAMI -- Pending Miami Heat free-agent center Hassan Whiteside hopes to have his future decided on the first day of free agency next week and emphasized Sunday that he remains open to all potential suitors.

"I really don't think it's about loyalty. I think it's just about [finding] the best situation for myself," Whiteside said. "I didn't say [Miami] wasn't the best situation, but we're going to see what happens. It's not like I'm really counting the Heat out or counting on another team. It's just open."

Whiteside, 27, is widely regarded throughout the NBA as one of the top five talents available when free agency opens July 1. Oklahoma City Thunder forward Kevin Durant will be the marquee free agent in the market, but Whiteside has already reportedly commanded significant interest from the Dallas Mavericks, Los Angeles Lakers, Portland Trail Blazers and Golden State Warriors, among others.

Last month, Heat president Pat Riley said retaining the NBA's reigning leader in blocked shots was the team's top priority -- even entering an offseason when Miami must also reach a deal to re-sign franchise catalyst Dwyane Wade. The Heat can sign Whiteside to a maximum contract worth $98 million over four seasons, which is slightly more than any outside team could offer the athletic 7-footer.

Addressing his free agency for the first time since the Heat's playoff run ended in the second round, Whiteside spoke to a dozen reporters after he attended a Mountain Dew NBA 3X street basketball tournament that featured a team of his former college and high school teammates.

Whiteside said he met with Riley "about two weeks ago" as both men prepared for free agency. But Whiteside stopped short of suggesting the Heat had an inside track to retain his services, with the second season of his two-year deal with Miami set to expire on June 30. Two summers ago, Whiteside was begging teams for a training camp workout after he spent time in the D-League following short stints in various minor leagues around the world.

Now, Whiteside relishes being the center of NBA attention.

"I find it flattering, because in my past, I was trying to call those teams, and now it's the other way around," said Whiteside, who often reminds the media of the number of NBA teams that either cut him or ignored his requests for a tryout. "It's a flattering experience, and I'm thankful for this opportunity."

Whiteside said he hasn't narrowed his list of potential destinations and looks forward to getting a better sense of the interest he will garner around the league on Friday, when teams can start contacting players. He said several things will factor in his decision, such as money, what his role will be on both ends of the court and the lifestyle he and his family could have off the court.

"It's a toss-up. It's a lot of things that come into it," said Whiteside, who could command a starting salary of as much as $22 million next season after he earned $990,000 last season. "It's not one specific thing. It's like having a wife. You can't say one specific thing you like about her. You have to like her as a whole. I have to choose it all together, so all of the dots have to connect."

Should Whiteside return to the Heat, he would be positioned as the long-term anchor on a team that still has not reached a resolution on when or if perennial All-Star Chris Bosh will return from a second consecutive season cut short because of recurring blot clots. Bosh still has three seasons remaining on a five-year, $118 million contract he signed in the summer of 2014.

Miami will enter free agency with at least $42 million to spend, which Riley hoped to split in some fashion to bring back Whiteside, Wade and forward Luol Deng. Should Whiteside depart to another team, Riley is expected to target Dwight Howard, Al Horford and Pau Gasol among available centers.

"He's our No. 1 priority, period," Riley said after the season of Whiteside, who averaged 14.2 points, 11.8 rebounds and 3.7 blocks per game. "He's a game-changer, and I don't even think he's reached his real ceiling in a couple of areas in his game. He's shown all of us he can be a 15 [points], 15 [rebounds] and four blocked shots a game. He'll be right there in front of the line for us."

Whiteside elected not to speak to reporters during the players' exit interviews after the playoffs. He missed the final three games of the Heat's loss to the Toronto Raptors in the second round because of a knee injury. Whiteside said Sunday he didn't need offseason surgery and is healthy after rehabbing with Miami's staff. He hopes to build on last season's third-place finish in NBA defensive player of the year voting.

"On July 1, hopefully I'll know," Whiteside said of free agency. "I hope it's an easy decision to make."