Have never-say-die Rangers met their match in Lightning? 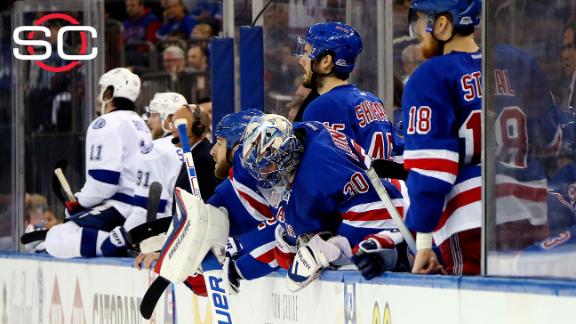 NEW YORK -- The New York Rangers have built a reputation as the Rasputins of hockey, and they're going to have to summon that death-defying magic once again now.

The past few postseasons, other teams have found that to finish off the Rangers you almost have to bind them, gag them, wrap them in chains and throw them in the East River to be rid of them. And even then, they may come bursting back through the Eighth Avenue entrance at Madison Square Garden and chase you into the corner for another puck, teeth bared.

The Pittsburgh Penguins found that out about New York in the past. The Washington Capitals found the Rangers a tough out more than a few times in the postseason, too.

But this Tampa Bay Lightning team is different.

The Rangers may be 14-3 in elimination games since 2012, but it's the Lightning who have had the Rangers on the run most of the Eastern Conference finals. And that was true even for great swaths of the two games that the Rangers have won.

The Lightning seem swift and poised in cribbing two of this Rangers team's best traits. They appear capable of defeating the Rangers any which way they need to, home or away, whether it takes pelting Henrik Lundqvist with shots until he looks ordinary, or beating New York at its own highly disciplined game, as Tampa did Sunday with a 2-0 victory in Game 5 at the Garden.

The Lightning now lead the series three games to two, and the memory of how this game was lost won't sit well with the Rangers as they try to stave off elimination when the series resumes with Game 6 in Tampa on Tuesday.

The seriousness of what the Rangers are up against showed on their faces after the game. The thought that Tampa Bay might just be the better, if not a more experienced or battle-tested team, seems to be sinking in.

Rangers center Derek Stepan sat at his locker and stared at the floor after the game. Weary-looking Rangers defenseman Marc Staal, whose tripping penalty led to Tampa's second goal, said, "This is not the position we want to be in, obviously."

Across the room, New York captain Ryan McDonagh talked about how much more opportunistic the Lightning again were.

"We've seen it from this team five games now," McDonagh said. "If you're not all in sync, jumping in and being aggressive, that's where they break you. They made us pay."

The four power-play opportunities the Rangers couldn't capitalize on galled them, for sure, especially when Tampa Bay followed its fourth kill with its first goal of the game, by Valtteri Filppula, with 13 minutes, 29 seconds gone in the second period. The Rangers had by then dominated possession of the puck, the battles in the corners and the shots on goal.

"But we didn't get much out it," Rangers coach Alain Vigneault said.

Tampa coach Jon Cooper points to penalty kills as a difference-maker for his squad.

"I thought that was the whole key to the game," he said. "If they get that first one [instead], who knows how this game turns."

Still, the Rangers aren't the kind of team that goes away. And they didn't Sunday. They're used to wearing other teams down with a potent mix of will and toughness, relentlessness and self-belief, as well as a big dose of great goaltending by Lundqvist. It's what got the Rangers to the Stanley Cup finals last season and the Presidents' Trophy this year.

During this journey through the playoffs, they've had to stare down Sidney Crosby and Evgeni Malkin, Alex Ovechkin, and now Stamkos and the Lightning's Triplets line. All that, and try to solve a 6-foot-7 goaltender in Ben Bishop, who looks more like a lunar eclipse on skates.

But again and again, Tampa Bay keeps matching or topping whatever the Rangers have thrown at them in this series.

The Rangers had every right to think they were in fine shape coming home Sunday. Their 5-1 victory in Game 5 had been a statement win. Following some rare admissions of doubt and soul-searching Lundqvist again was nearly impenetrable after the Lightning rang up the Rangers for 11 goals in the previous two contests.

The question had then shifted to how Bishop, who only is in his first full NHL season, would rebound from giving up 10 goals in his previous two games. There also was conjecture that perhaps he was playing hurt.

And Bishop's answer to all of that was to toss a shutout.

"We knew Ben would have to be big for us," said Lightning captain Steven Stamkos, "and he was."

If Bishop were all the Rangers had to think about again In Game 5, that would be enough. But when the Lightning's NHL-best offense had only four shots on goal after the tightly played first period, it seemed like perhaps Cooper was playing into the Rangers' hands just a little after he had said following his team's morning skate that he planned to have his team tighten up.

"I think we've gone into these last few games thinking, 'Gunslinging, we're going to shoot this one out,' and we're not winning [this series] if that's going to be our mindset," Cooper had said.

He was right. The Lightning not only won, they beat the Rangers at their own game.

Afterward, a lot of the Rangers talked about how they've stared at these sorts of elimination games before. How that experience will surely help. How they'll go down to Tampa and play their best game this year.

But even then, it might not be enough. The Lightning are firing on all fronts right now. Their top players are playing great, their goaltender seems to have righted himself and last night, in Cooper's words, they won the special-teams "war."

After Game 5, one Lightning player after another said they understand the Rangers will be hard to finish off. As Stamkos put it, "We know the fourth game is the hardest to win."

But as the Lightning captain looked ahead to closing out the series, there is something else he said New York should worry about. The Rangers are almost out of rope. But the Lightning?

"This team'' Stamkos insisted, "has more to give."