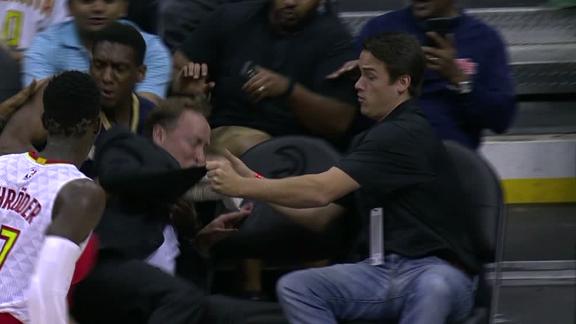 ATLANTA -- Hawks coach Mike Budenholzer was escorted to the locker room late in the first half of Tuesday night's preseason win over New Orleans after being bowled over byPelicansguard Langston Galloway, who was chasing a loose ball.

Budenholzer already had his right hand in a brace and his arm in a sling after suffering a broken finger that required surgery Monday. The second-quarter collision with Galloway knocked Budenholzer over the first row of seats and into the media seating.

Budenholzer was helped to his feet and sat on the bench for a few minutes, grimacing in pain, before being escorted to the locker room. He did not return to the game.

Assistant coach Darvin Ham, who took over for the remainder of the game, said Budenholzer did not aggravate his hand injury in the collision.

"Coach Bud is doing great," Ham said. "He took a nasty, nasty spill, but all in all, he's fine. ... The ribs got a little touched up, but overall he's doing well."

Budenholzer remained in the arena for the end of the game, won by the Hawks 96-89, but was not available for comment.

It was a bad night for coaches. New Orleans coach Alvin Gentry was sick and unable to join his team on the bench. Pelicans assistant coach Darren Erman filled in for Gentry, who had "stomach discomfort," according to the team.

Before he left the floor, the expression of pain on Budenholzer's face became more intense when it was announced the Hawks were called for a delay of game penalty on the play because he touched the ball while unable to avoid Galloway.

Hawks guard Kyle Korver had to laugh at Budenholzer's predicament.

"Man, Bud is having a tough week," Korver said. "He saw it coming and then he got delay of game because he hit the ball before it came out. Oh man. Sorry, Bud. It was amazing he was even here after having surgery yesterday, and he was on some meds, obviously."