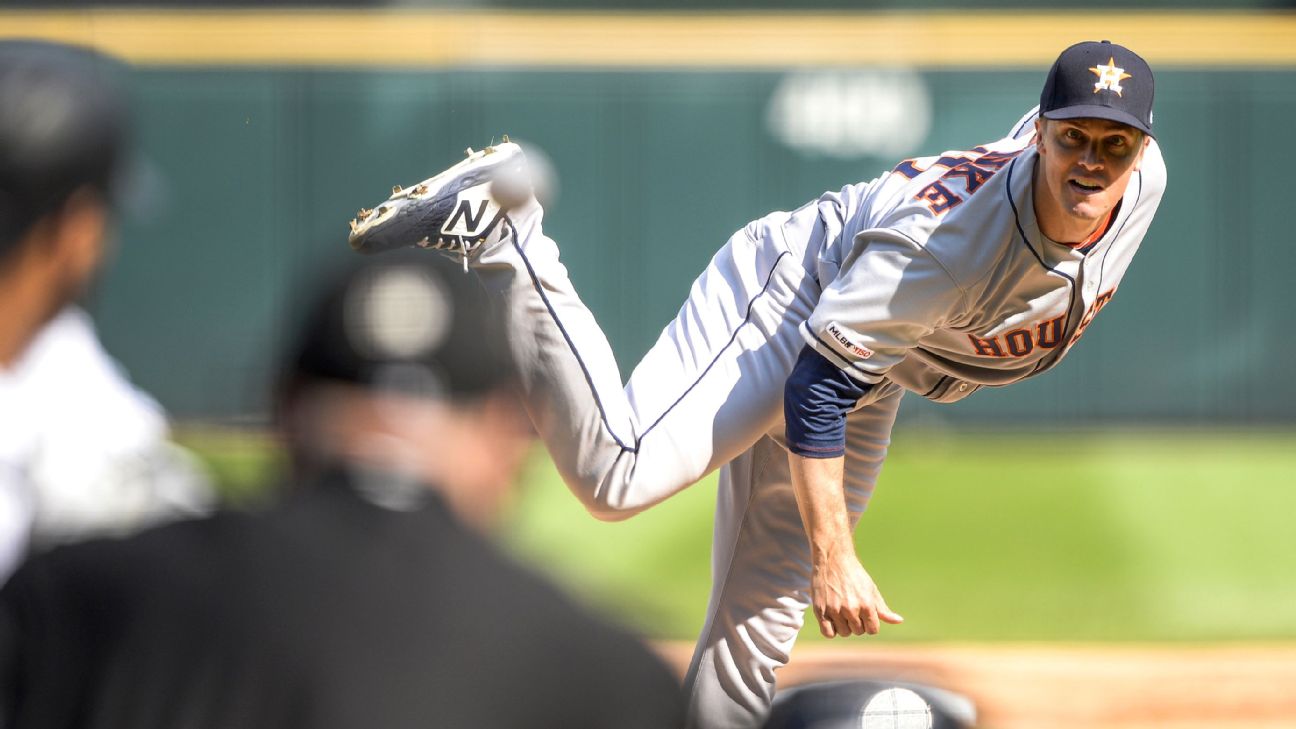 Is it unfair to judge trades after one month? Absolutely not! Not when it's trade deadline deals we're judging. Look, obviously it can take years to truly evaluate these trades. After all, you never know if some kid in rookie ball will blossom a mere three years later into one of the best rookie sluggers in the game's history: That's Yordan Alvarez, whom the Astros acquired from the Dodgers at the 2016 trade deadline for Josh Fields.

For playoff contenders, however, it's all about the short-term window. These deals are made to enhance the odds of making the postseason or improving a team's chances of winning it all. Let's consider some of the significant deadline trades from the contender's perspective and the returns after the first month.

Deals that are definitely helping contenders

Astros acquire Zack Greinke from Diamondbacks: Greinke is 4-0 with a 2.45 ERA in his four starts, so it's hard to beat that. More important, the A's have continued to play well and put just enough pressure on the Astros -- Oakland cut the division lead to 6 games Aug. 17 -- to make Houston a little nervous. So Greinke has meant more than just an additional weapon for the postseason; he has helped the Astros maintain a comfortable lead in the American League West as well as keep pace with the Yankees for home-field advantage.

One caveat to all that: Greinke hasn't pitched quite as well as he did with Arizona. The numbers:

Greinke hasn't really changed anything in his pitch selection and has allowed a higher BABIP with Houston (small sample size alert), but the drop in strikeout rate is at least something to watch over the final month. Against power-hitting lineups such as the Twins and Yankees in the postseason, it's going to be hard to succeed with a 14% strikeout rate and no pitchers batting.

Cubs acquire OF Nicholas Castellanos from Tigers: Don't blame Castellanos for the Cubs falling behind the Cardinals in the National League Central race. When the Cubs made the trade, it seemed like a bit of an awkward fit as they already had Jason Heyward and Kyle Schwarber in the outfield corners, but Castellanos has started all 25 games for the Cubs in August -- mostly in right field, with Heyward sliding over to center. The defense has been weakened with both Schwarber and Castellanos out there, but Castellanos is playing every day because he keeps raking, hitting .365/.400/.712 with the Cubs, including nine home runs after hitting 11 in 100 games with the Tigers. He's seventh in the majors in wOBA in August.

Braves acquire relievers Chris Martin from Rangers, Shane Greene from Tigers and Mark Melancon from Giants: OK, on the surface it doesn't look like the Braves improved their bullpen:

That's a combined 5.51 ERA over 34 innings. And, yes, there were a couple of memorably bad performances right after the trades were made. But the trio has settled down and all the peripheral numbers are solid: 41 strikeouts, five walks and three home runs over those 34 innings. Bottom line: The Braves have gone 17-9 in August in part because the bullpen is now much deeper than it was in the first half. Yes, the ultimate test will come in October, but the Braves' chances to make a World Series run have increased.

A's acquire Tanner Roark from Reds: This trade was a Billy Beane special, an under-the-radar deal that came in late on deadline day and was lost in the dust of the Greinke deal. Roark is 2-1 with a 3.30 ERA in five starts -- his start Wednesday, a no-decision in which he allowed four runs in six innings, has been his worst -- and he has beaten the Cardinals and Yankees and held the Astros to two runs in six innings (and the A's won that game as well).

Deals that look better than they did at the time

Indians acquire Yasiel Puig from Reds and Franmil Reyes from Padres: The most interesting deal of the deadline was this three-team trade that sent Trevor Bauer to the Reds and Reds prospect Taylor Trammell to the Padres. While everyone understood the reasoning behind trading Bauer -- the Indians needed some offense, Bauer is a pain in the butt to be around and would have been traded anyway in the offseason with just one year left before free agency -- the trade was risky because Bauer chewed up quality innings in a Cleveland rotation that included two rookie starters.

Puig and Reyes haven't been great -- Puig is hitting .284/.357/.455 and Reyes .205/.261/.470 -- but they've delivered some big hits and have combined for 29 RBIs in the month as the Indians have gone 15-11 to stay close to the Twins. Meanwhile, rookies Zach Plesac and Aaron Civale have continued to pitch well, so the rotation has survived even without Bauer and Corey Kluber (who suffered an oblique strain in his first rehab start). Don't forget that the Indians also acquired lefty Logan Allen, who should battle for a rotation spot in 2020.

Mets acquire Marcus Stroman from Blue Jays: It was a big head-scratcher when the Mets acquired Stroman on July 28, when they were five games under .500, but New York immediately went on a big run to turn into wild-card contenders, going from 50-55 on July 28 to 67-60 after sweeping the Indians last week. Now the Mets have lost five in a row again and are about to head out on a crucial road trip to Philadelphia and Washington.

Stroman is 1-1 with a 4.91 ERA with the Mets after posting a 2.96 ERA with the Blue Jays, so he hasn't been particularly stellar, with just one of five outings registering as a quality start. The Mets have won four of his five starts, however, as he has kept them in the game. Plus, this trade was as much about 2020 as 2019 because Stroman is under team control for another season. Of course, this deal could backfire in the long run if young right-hander Simeon Woods Richardson blossoms with the Blue Jays. They promoted him to high-A ball after the deal and he has pitched well there as an 18-year-old.

Nationals acquire relievers Daniel Hudson from the Blue Jays and Hunter Strickland and Roenis Elias from the Mariners: OK, two out three isn't bad. Hudson (1-0, 1.35 ERA, one save) and Strickland (2-0, 1.64 ERA) have pitched well while Elias strained a hamstring while batting in his first game and remains on the injured list. The problem is the bullpen still has a 5.62 ERA in August, as the guys other than Hudson and Strickland have had issues, including closer Sean Doolittle, who landed on the IL with a sore knee after two monumental blown saves this month. Still, the Nationals are 17-7 in August and you wonder where they'd be without Hudson and Strickland putting up some solid innings.

Phillies acquire OF Corey Dickerson from Pirates: Has anybody been less predictable over the past few seasons than Dickerson? He was an All-Star with the Rays in 2017, hitting home runs and spending a lot of time at designated hitter since he wasn't so hot in the outfield. He went to the Pirates in 2018 and hit fewer home runs, but also hit .300 and won a Gold Glove. He missed time this year with an injury and he has maintained the .300 batting average with a lot of doubles, but his defensive metrics are terrible again. In 21 games with the Phillies, he's hit .280/.286/.585 with five home runs, six doubles, two triples and 23 RBIs.

Twins acquire Sergio Romo from Marlins: The veteran slider-slinger has filled a big role in the Minnesota bullpen, saving three games and picking up eight holds as all but one of his appearances have come in the eighth or ninth innings. His fastball averages 86 mph and he throws almost 60% sliders, but batters are still chasing that Frisbee out of the strike zone after all these years.

Deals that look worse than they did at the time

Twins acquire Sam Dyson from Giants: Dyson had been one of the top setup men in the majors with the Giants, with a 2.47 ERA in 51 innings and nifty peripherals (47-7 SO-BB ratio, just three home runs allowed). In his first game with the Twins, Dyson allowed three runs without getting an out as Minnesota blew a 4-1 lead in the ninth and eventually lost to the Marlins. In his second game, he allowed three runs again, although the Twins held on for the victory. Then he landed on the injured list with a sore biceps. He was back after 10 days and has allowed one run in 7 innings since then, so the two-month review might end up looking better than the one-month review.

Astros acquire Aaron Sanchez and Joe Biagini from Blue Jays: Everyone loved this deal for Houston, as the Astros gave up only a fourth outfielder type in Derek Fisher to take a chance on the hard-throwing Sanchez, the former ERA champ who had struggled with the Blue Jays but is still under team control through 2020. Then Sanchez went out and threw six no-hit innings in his first start and it appeared the Astros had immediately fixed him.

Or maybe not. Sanchez beat the Orioles, then the A's roughed him up and then he left a start and landed on the IL with a sore right pectoral muscle. Even if he returns in mid-September, that's limited time for the Astros to find out if he'll be able to contribute in October, most likely as a reliever. Biagini, meanwhile, has allowed 14 hits, five walks and two home runs in 8 innings, and at this point would be off the playoff roster.

Deals we can already declare failures

Giants acquire Scooter Gennett from Reds: It seems like only last year that Gennett was an All-Star. It was last year! The Giants tried to play it both ways at the deadline, trading away Melancon and Dyson (plus Derek Holland and Drew Pomeranz), but adding Gennett and keeping Madison Bumgarner and Will Smith. The Giants released Joe Panik soon after the Gennett trade, but Gennett hasn't been an upgrade and has 41 strikeouts and two walks on the season between the Reds and Giants. It was a roll of the dice hoping Gennett would find his 2018 swing, but it hasn't happened and the Giants released him this week.

Diamondbacks acquire Mike Leake from Mariners: With Greinke on the way to Houston and still on the periphery of the wild-card race, the Diamondbacks added Leake and Zac Gallen from the Marlins (that was more of a prospect trade, as shortstop Jazz Chisholm went to Miami). Leake is 1-2 with a 6.59 ERA in five starts with Arizona, allowing 41 hits and eight home runs in just 28 innings. The Mariners and Cardinals will pick up most of the $20 million still owed Leake, but at this point it's not even clear he'll be in Arizona's 2020 rotation. 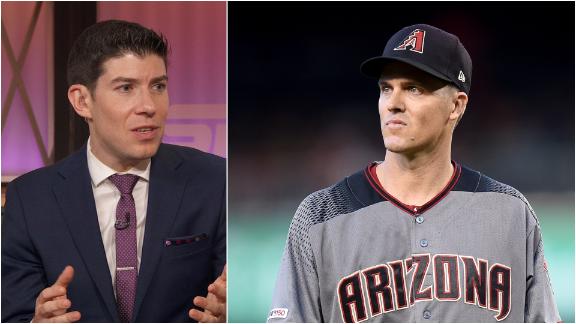