Hop in the back, Mom and Dad are driving! What it's really like getting called up to the majors 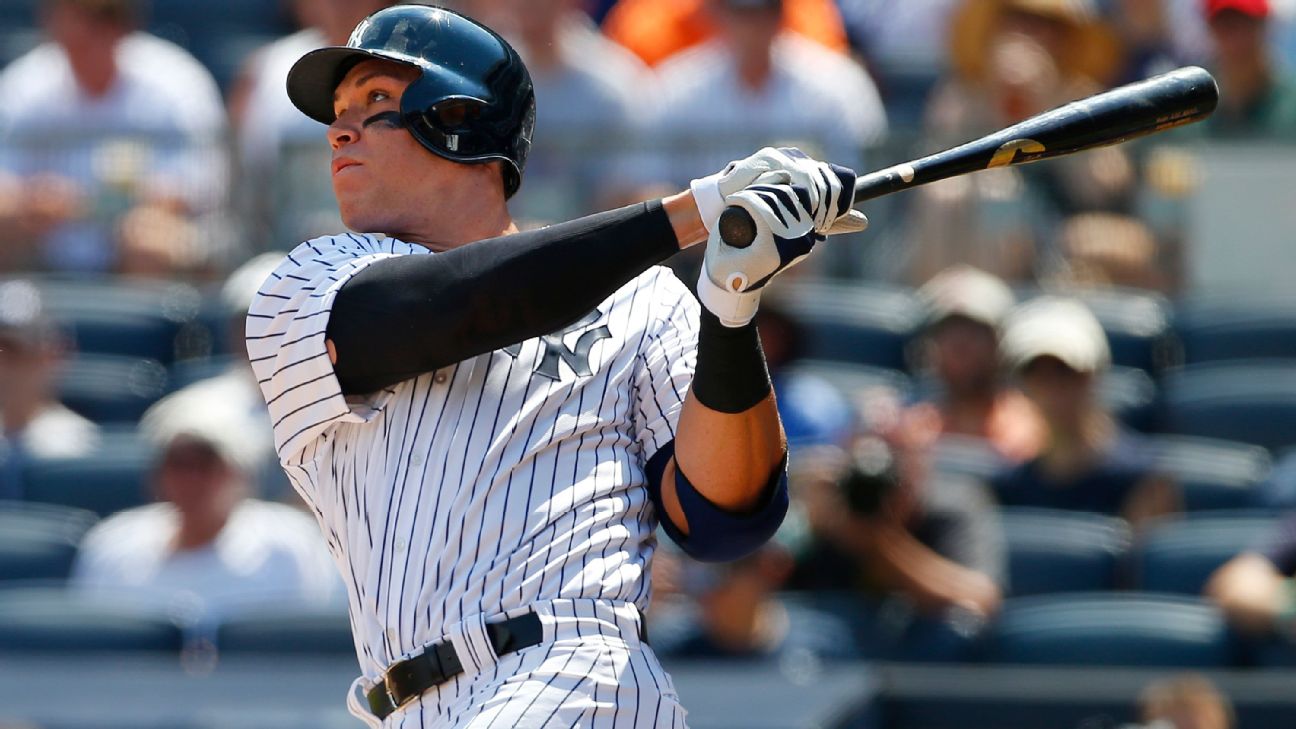 Some guys get it straight. Others get punked. Regardless of how the news comes, big leaguers never forget the moment they got called up to The Show.

Even though expanded rosters are going the way of the mound visit -- starting next year, the limit drops from 40 to 28 players -- that doesn't change the fact that leveling up to the majors is pure awesomeness.

In honor of the final year of September call-ups as we now know them, we asked some of the game's brightest stars to share their stories.

I was in Rochester, New York. We were playing the Triple-A team from Minnesota. Just finished the game, out to eat at one of the best and only spots right there in Rochester by our hotel -- Dinosaur Bar-B-Que. My family and my girlfriend were in town, and our whole team was there, eating dinner at midnight. All of a sudden, our manager, Al Pedrique, comes up to the table and says, "Hey, you might want to speed your dinner up a little bit -- you gotta go play right field in New York tomorrow."

I was shocked. I was still waiting for my food. I was hungry. It really didn't hit me. My parents start going crazy. My mom's crying, everyone's happy. My next thought was, "Well, how are we getting there? What's the next move? We drivin'? We flyin'?"

Since my family was there, we packed up the rental car and all drove together through the night. I told my mom I would drive, but she was like, "No, you need to rest, so sleep in the back." I was like, "Mom, I just got called up I'm not gonna be sleeping back here in the back of the car." I barely fit back there. It was a tight squeeze. Legs up, knees up. We get in at 5 [a.m.], and then at 6 o'clock, someone pulled the fire alarm. So I had to get up, go out of the hotel, everyone's sitting outside. By the time I came back in, it was 7, and I was like, "I'm just gonna head to the stadium." No sleep, no rest. I think that helped me. Adrenaline kicked in, and we were ready to roll. Went 2-for-3 with a homer [in his first major league at-bat].

I think that's the secret, to be honest -- you should probably stop sleeping.

I was in Triple-A at the hotel room in Pawtucket [Rhode Island]. It was late at night, and I was playing dominoes with a couple of my teammates. I got a call from our Triple-A manager. I was so not expecting it. I was going through a rough stretch. I was like, maybe 0-for-10 with seven strikeouts. I wasn't even looking for a call. It caught me by surprise. I had no idea.

I definitely thought they didn't want to win. I mean, I was a prospect coming up, and I was having a good season, but those last couple days, I wasn't playing well.

He told me someone was coming to pick me up to take me to the hotel in Boston because in the morning we were flying to San Francisco. There were a lot of emotions. I couldn't tell my mom because it wasn't official. But then I still ended up calling her. I had to tell my mom.

I was in Tennessee in Double-A, and I got taken out in like the third inning, after a base hit. Got told I was getting called up. I got a pinch runner, so I kind of knew what was happening.

Why else would I be getting taken out of the game in the third inning? There's no other reason.

Jake Marisnick got hit by the next pitch. He got taken out of the game, and they told him he was getting called up, too. So we got to go together as buddies.

Dude, it was cool because it's a major experience, and me and him were like best friends at the time. Still are really good friends. We were roommates in Double-A with J.T. Realmuto. The three of us lived together. So it was cool. You get to experience that with one of your really close friends. There's nerves, and you don't know what you're doing at all because you've never been in the big leagues.

So you get to experience that with somebody who also has no idea what's going on or what to expect. The ups and downs, and everything that comes with being a rookie in the big leagues -- you get to experience it with a really close buddy. Very fortunate in that aspect. It's rare that two guys get called up at the same time, ever, let alone who are really good friends. So it was fortunate. We lived together in Miami that year. It was awesome.

I was in Triple-A, and we had an off-day before Sept. 1st call-ups. I was only 20, but I was like, "Man, I just hit .320 and I had 18 homers and 90 RBIs, so there's a chance." They called me in, and they were like, you've had a great season and we just want you to know how great you've done this year, and you're going to the Arizona Fall League. I was like, "I already know that." I was a little disappointed.

I was like, it's all right, I'll just go and finish out this year. Then they told me they wanted me to go to Atlanta first. Jason Heyward and I were living together. We lived together all through the minor leagues -- 2008 in Rome, 2009 in Myrtle Beach and Mississippi, and then 2010 he bought a townhome and he was like, "Why don't we live together?"

But that year, he made the team out of spring training. So we would leave, and he would go to Atlanta, and I would go to Gwinnett. I was like, "Man I want to go that way." So I just had to sit there at his house while the big league team played the day before -- then I finally got to go on Sept. 1st.

I walk into the yard and Bobby Cox is there, and I see the lineup and I'm hitting sixth and playing first. I'm like, "Oh jeez." Instant heart to my stomach. Faced Mike Pelfrey and the Mets. I remember it like it was yesterday. It was so cool. It's what every kid dreams about. And my dad was there in the stands.

It's everything. When you finally get that call, it doesn't matter what day it is, or where it is, or what happens -- it's the best moment there is.

I was in OKC. At 2:30 in the morning, my roommate Trevor Oaks came in to wake me up. [Then-farm director] Gabe Kapler had tried to get a hold of me five or six times, and I was asleep. I didn't hear it. I never hear my phone ring, even during the day. I have it on vibrate. So Gabe ended up calling my roommate, who actually answered his phone. So he had to come to my room and told me to call Kap.

He wouldn't have woken me up at 2:30 just to prank me like that, so I knew it was the real deal. Then Kap told me the news.

So I called my parents at 2:30 in the morning, then I had a flight that morning at 8 to San Francisco. I went and packed up one suitcase in my room, went to the stadium, packed up my bag there and stayed at the stadium until like 6, then got to the airport at like 6:30. I didn't sleep at all.

It was last year. I had just thrown a rain-shortened no-hitter, and so I was pitching pretty well. I was working on developing a changeup, just like I have throughout my whole career, and I was working with Steve Karsay, our pitching coach in Columbus at the time. He was like, "Hey, come in early so I can show you some video." So I came in early. We were in Gwinnett, Georgia. It was kind of unusual, but I went in and we were watching some video of some right-handed changeups and comparing them to mine.

All of a sudden, our manager Chris Tremie walks in and goes, "Oh, Kars didn't tell you?" Kars goes, "Oh yeah. You didn't notice all these clips are in Minnesota?" I was like, "No." He goes, "Yeah, you're starting there on Thursday."

Looking back, every clip was another pitcher pitching in Minnesota's ballpark against Minnesota. So it was like a scouting report. It was cool. I was totally blindsided.

We were in Tacoma [Washington]. It was Kids Day, so we had an 11 a.m. game. We had a tee time at 3 [p.m.] at Chambers Bay, so we're all just swinging at the first pitch. Just put the ball in play and get out of there.

We had just got done playing. I walked off 18 and got the call from our Triple-A manager. He just said, "Hey, they need you up there. You've got a 3 a.m. taxi to the airport." We were playing with two foursomes. Hunter Dozier was there. I was a little surprised. I had been playing, so I was hoping the call would come. But I was also 27 at the time and had been playing well for a while, so I wasn't sure if the call would ever come. So it was nice that it finally did come.

It was a cool moment. We celebrated, then got back to the hotel and celebrated a little more.

We were playing at Reno [Nevada]. We were wearing pink because of Mother's Day. I had a pretty good day. I gave my team the lead with a triple. Right after the game, I showered and got changed, and I was eating at one of the tables in the clubhouse. Lance Burkhart, the hitting coach, told me that Rod Barajas wanted to talk to me. I knew it was good news coming, so I threw away my food and walked into the office.

I couldn't believe it. First person I called was my mom. Then my wife. Had a pretty good time. I was flying the next day. When I got to San Diego, that's when I celebrated with my mom, my cousins and my best friend,Franchy Cordero.

We had a day game in Colorado Springs, and me and like four or five guys got out of there real early after the day game. We drove up to the mountains and went trout fishing.

It was a really tough day -- I think I was the only one to catch a fish that day. Right as we were done, they called and told me to get my crap together and get back to town because I was getting called up. So I had to cut the fishing trip short.

But I was the only one who caught anything, and I got called up. So I had a great day, and everybody else had a terrible day.
Report a correction or typo
Related topics:
sportsespnaaron judgemlbfreddie freemancharlie blackmonnew york yankeesfranmil reyesshane biebercody bellingerchristian yelichxander bogaertswhit merrifield
Copyright © 2020 ESPN Internet Ventures. All rights reserved.
More Videos
From CNN Newsource affiliates
TOP STORIES