If the Red Sox retired numbers like the Yankees do ... 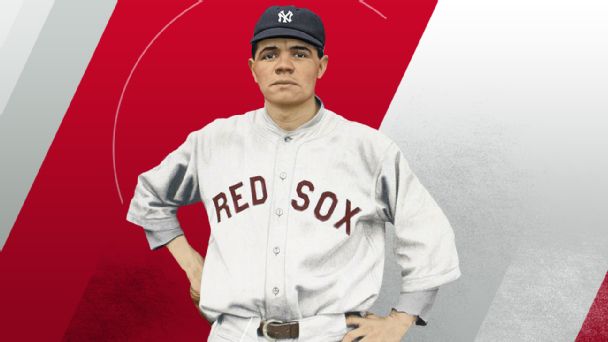 The New York Yankees have retired so many numbers that they no longer have any single digits left (well, except this one). Which made us wonder: With David Ortiz getting his jersey retired in Boston, which Red Sox stars of the past would have plaques if their team handed out the honor as liberally as the Bombers do?

In an attempt to answer that question, we sent Red Sox beat writer Scott Lauber and Yankees beat writer Andrew Marchand to an alternate universe -- an imagined infinity where Beantown and the Bronx are one and the same -- to debate the merits of certain Sox in relation to their pinstriped counterparts.

If Jorge Posada ... then Jason Varitek?

Marchand: The Yankees are a little, shall we say, lenient in celebrating their past successes. Posada was not a Hall of Famer, but there was a legitimate debate about whether he deserved a place in Cooperstown. You can't say the same about Varitek. "Sado," as his best buddy Derek Jeter called him, was on five championship teams. The only reason to give Varitek the edge in this comparison is that Varitek never asked out of the lineup after being demoted to the No. 9 hitter's spot. There is a case for why the Yankees should have abstained from retiring No. 20, but a better case exists for why No. 33 is still in play at Fenway.

If Andy Pettitte ... then Curt Schilling?

Lauber: For years, the Red Sox applied two rules to number retirement: A player had to spend his whole career with the club and be in the Hall of Fame. Monument Park has fewer rules than the Thunderdome. Pettitte left the Bronx and came back, and hasn't been retired long enough to see his name on a HOF ballot. But while Pettitte was the last Yankee to wear No. 46, four Red Sox have worn No. 38 since Schilling. That's OK. In lieu of a number, maybe the Sox could retire Schill's sock -- still bloody, of course.

Marchand: Pettitte was named in the Mitchell report and still had his number retired, a discrepancy that speaks to his dynamic personality. He was popular among teammates, coaches, fans and the media. While Schilling certainly didn't command that kind of magnetism, he was perhaps most responsible for breaking the Bambino's curse. I think if you're going by the Yankees' standard of number retirements, Schilling deserves to be honored at Fenway.

If Bernie Williams ... then Dwight Evans?

Lauber: By any measure, and not just the everyone-is-welcome Monument Park standard, Evans' number should be retired. He checks enough boxes: 19 years with the team, a three-time All-Star, eight Gold Gloves, 66.9 career WAR, 127 adjusted OPS. All Dewey is missing is a ring. Hard to hold that against him, though, considering he batted .300 with three homers and a .977 OPS in the Red Sox's seven-game World Series losses in 1975 and 1986. The Yankees would've honored Evans the second he called it quits. The Red Sox gave out No. 24 to Manny Ramirez and David Price, among others.

Marchand: That seems crazy to me. Why isn't Evans' number retired? Oh yeah, the Red Sox are much stricter about that particular ritual than the Yankees. I think Williams' number should be retired. Again, not a Hall of Famer, but he stacks up better than you would think historically and is without a doubt a legendary Yankee. It is nuts to me Evans' number has been worn again. Maybe they can retire No. 24 for all three jersey wearers. Well -- maybe for two of the three, I suppose.

If Joe Torre ... then Terry Francona?

Lauber: Pop quiz: What number did Francona wear during his eight years as Red Sox manager? Tito led the Sox to a 744-552 record, five playoff appearances and two World Series crowns, including the Curse-buster in 2004. But he also wore a long-sleeve pullover rather than his No. 47 jersey because of problems with his circulation. That wouldn't stop the Yankees. No uniform? No problem. Monument Park would still have a place for you.

Marchand: That's a tougher one. Francona wasn't Torre -- who led a dynasty -- but Torre didn't break any legendary curses. I could see the case for honoring Francona because he wasn't exactly sent out the right way. The Yankees and Torre also didn't end on good terms, but after they buried the hatchet, Torre has been immortalized as a Hall of Fame manager -- by way of Monument Park.

If Don Mattingly ... then Nomar Garciaparra?

Lauber: Like Mattingly, Garciaparra experienced a short stretch as one of the best players in the game. And like Mattingly, Garciaparra didn't win a World Series. But the similarities end there. Donnie Baseball captained the Yankees and was a beloved figure in history of the franchise. The Sawx traded Nomah midway through their historic 2004 season. How can a player whose departure actually made his team better deserve to have his number retired? Even for the Yankees, that would probably be a deal-breaker.

Marchand: Donnie Baseball is beloved. He is like the Godfather of the Dynasty, instructing Derek Jeter on how to run off the field as a young player. Beyond that, Mattingly was the best player in baseball for a short -- but distinct -- period. He is not a Hall of Famer, but he is a one-team player who is still adored throughout the Five Boroughs.

If Ron Guidry ... then Luis Tiant?

Lauber: Talk about a couple of pitchers who married substance with style. Yankees fans are still bitter that Jim Rice, not Guidry, was crowned AL MVP in 1978. But there can be no denying that Louisiana Lightning was fun to watch, with his high leg kick and the way he bounced off the mound. El Tiante had a longer peak and just as much flair, turning his back to home plate as he uncoiled in his delivery. That alone would get him into Monument Park, but being one of the best pitchers in Red Sox history should get his number retired.

Marchand: Might be time for the Bostonians to move on from an MVP race that is nearly four decades old, but I guess some people can't let bygones be bygones. I loved Tiant's style, so I would give him the honor of having his number retired.

Lauber: The Babe's career in Boston actually predated uniform numbers. So, how about retiring a hot dog -- and not just any hot dog, but a Fenway Frank -- in his honor? That's the way the Yankees would've done it.